My name is Ali Hasnain, and this is my coffee story.

“Since childhood, all I knew was ‘be an engineer’; ‘be a doctor’. Those were the only acceptable paths set out for us. To this day, my father doesn’t know what Coffee truly is. Everyone is still stuck on tea.”

Growing up in Pakistan, a country where exposure to speciality coffee is limited if non-existent, Ali Hasnain could have never foreseen his career.

“Life takes you places you can’t expect. I never thought I would be part of the industry, but my Life brought me here. I finally feel like I’ve found the missing piece.” 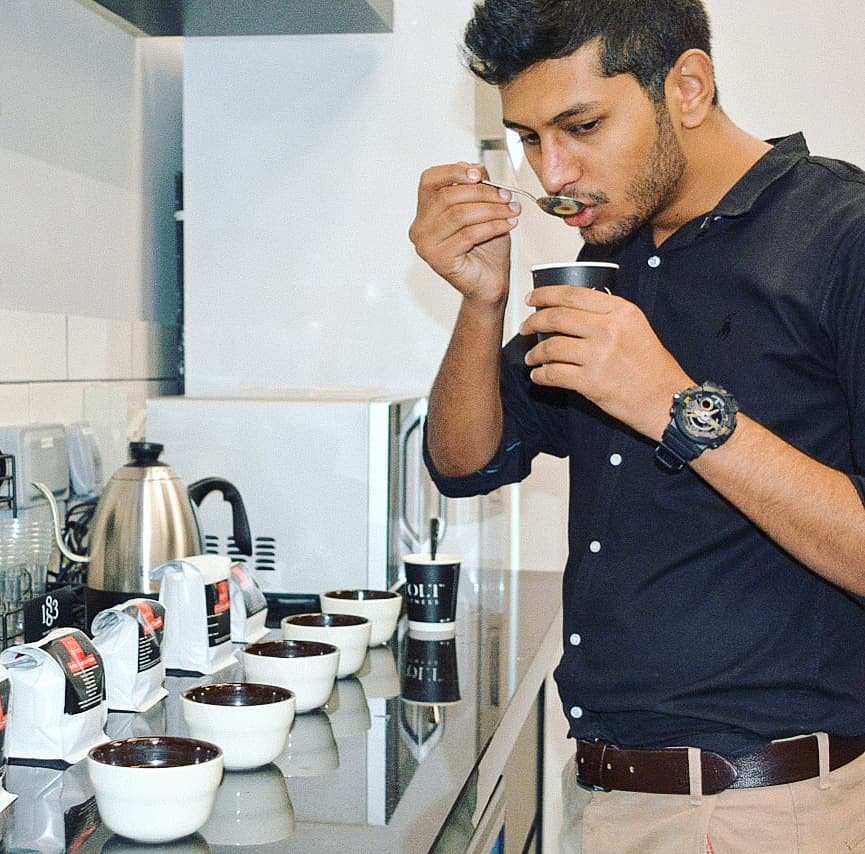 Considered a reputable vocation in The Western World, hospitality work is usually belittled, in Pakistan. Ali claims he is often referred to as a mere ‘tea maker’ by those who ignore the muscle of the coffee industry. He chooses, however, to concern himself with crowds that are better versed on the intricacies of Coffee.

Ali’s initial toe-dip into the coffee scene took place in Dubai, where he spent a short summer working as a barista for Gloria Jean’s Coffee shop. It was only within a matter of months that he gained his first training certificate and qualified as a full-time barista, at Coffee Planet. Having been introduced to a whole new world, Ali was equally met with a burning passion he never knew existed.

Before gravitating towards the craft of cupping and coffee tasting, Ali’s primary focus was latte art. He even took part in Abu Dhabi’s Latte Art Throwdown competition and won second prize. But it was only in the wake of speciality coffee that Ali realised how far the industry extends.

“Latte Art necessitates lots of practice, but cupping remains the most challenging task. One spoonful must deliver all the different flavours and levels of acidity.”

Reminiscing over his initiation to the hospitality industry, Ali explains how he had to work from the bottom up.

“My seniors had told me that the only way to climb the hospitality ladder was to start from the very bottom and do everything.”

And this is exactly what Ali did. Everything – from mopping to washing – till he became Second Cup’s youngest Assistant Branch Manager, in the whole of Pakistan.

Currently working as the head manager of a coffee shop, Ali claims that, even though his new senior role demands more account handling and inventories, nothing could deter him from his chosen path.

“Coffee is part of my Life. I cannot survive without it anymore.”

“Mr. Simab layered the first bricks and now it’ is up to us to build the rest of the house.”

Ali’s all-time dream is to open the best speciality coffee shop in Pakistan but isn’t naïve to the challenges he’ll have to endure.

“You’ll have plenty of ups and downs in this field. You’ll get hurt, even by your seniors and those you work with. They’ll try to bring you down. Never give up.”