Some people are coffee lovers, coffee connoisseurs, or coffee nerds; Binny Varghese is a coffee warrior.

He’s known as “the barista on a bike” throughout India because in 2017, he convinced his then boss to let him tour the country on his motorcycle in order to visit every café on their network. The 110-day journey took him 21,000 kilometers through India and Nepal and changed his life in more ways than one. 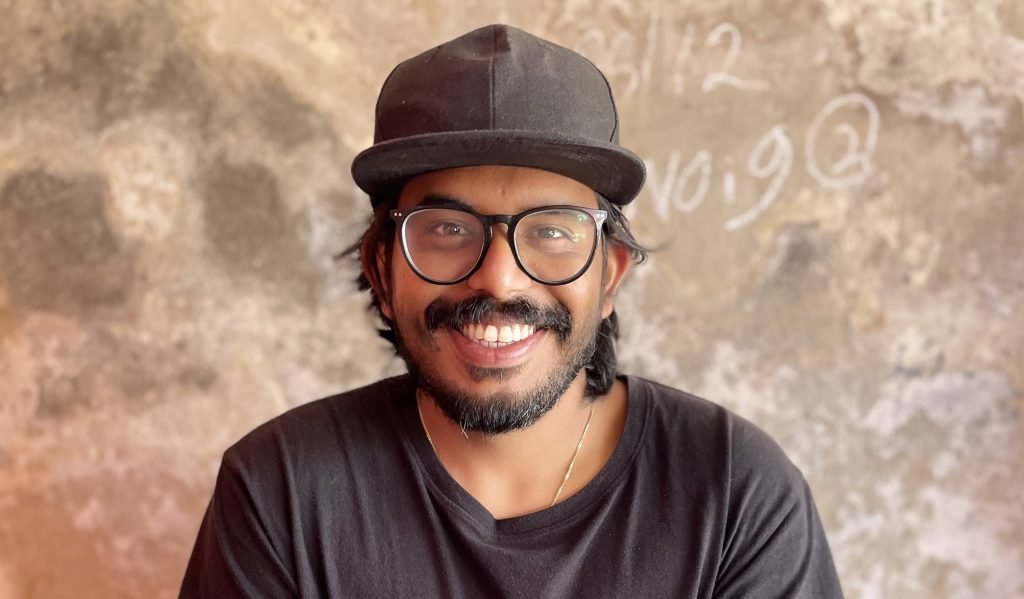 Binny says his coffee journey began as an accident. “I was a hotel graduate student and after working in hotels in a few countries, I developed an interest in alcohol – namely whiskey. But in 2015, I moved back to my home state in western India where alcohol is banned,” says Binny. With his dreams of working in the alcohol industry dashed, he opened up a newspaper in search for other opportunities. “The first job I saw was for a coffee trainer for a company that was opening cafes around the country,” he says.

According to Binny, there are a lot of myths about coffee in India, like how if you drink it, you will become dark-skinned.

“There’s a huge divide between the north and the south. In the north, it’s always instant coffee, while in the south, coffee is thick, bitter, and mixed with milk, condensed milk, or sugar. They do not know what black coffee is,” says Binny.

What particularly frustrates him is hotel coffee. “If you go to big hotels, they have really, really bad coffee. You need to close your nose to drink it. And yet they charge 1,000 rupees,” he says. (Street coffee costs around 15 rupees, while chai tea is around 6 rupees.)

“People who spend that kind of money to drink [hotel coffee] end up assuming that good coffee is supposed to be like that and that’s how standards are set. It’s either instant coffee or bad hotel coffee. So nobody knows what coffee is really is. And amongst all that confusion, if you open a nice specialty café serving pour overs with good beans, they taste it and say it doesn’t taste like coffee in a 5-star hotel,” he says. 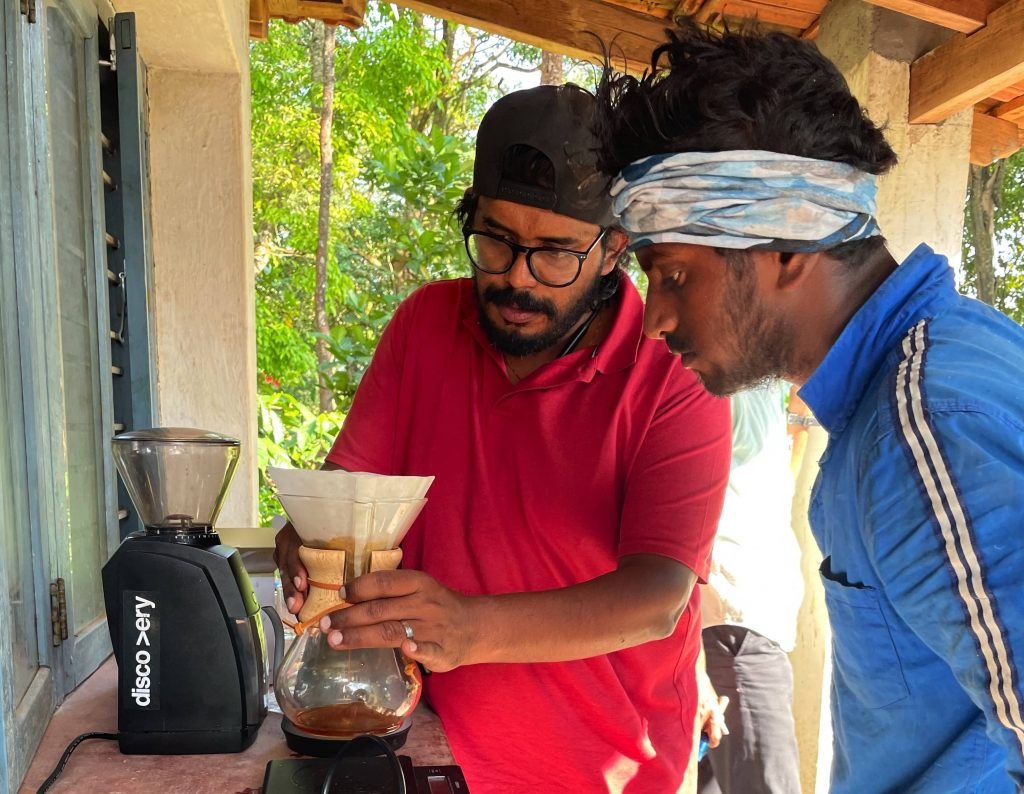 Binny is showing how to use Chemex

It’s a huge challenge to educate an entire spectrum of people but that’s exactly what Binny is tackling now. With his coffee motorcycle trip, the idea was to go to all of the cafes in the company, meet the people there, and help them solve any problems they had through coffee training. One stop along the way in Jaipur was particularly eye-opening for Binny, where he met Neeraj Sheoran, founder of Curious Life Coffee Roasters.

“I was invited to cup coffee at Curious Life one morning and I had no idea what to do. It was my first-ever cupping experience, and I remember the coffee was really good. I never tasted anything like it before. It was so beautiful, so sweet, so different. All I had before was burnt coffee and it changed my whole perspective,” says Binny.

Neeraj’s idealogy inspires Binny a lot. “He told me, ‘If I want to get something good for my coffee, I don’t bargain with coffee farmers. It just doesn’t make sense,’” shares Binny. “It’s a simple statement but it’s important,” he says. “Coffee goes through so many hands and that understanding is amazing.” 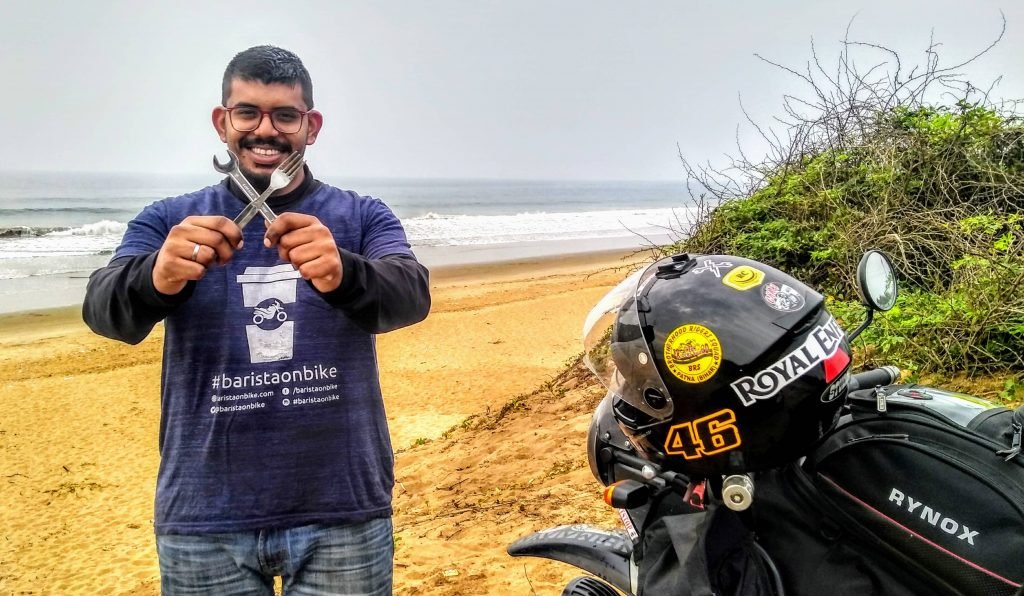 Binny Varghese with his bike

The journey also showed him firsthand how coffee really connects. “Mr. Praveen saw one of my articles in a local newspaper and reached out to me. There are some people in your life where you can sit down for a coffee and have an endless conversation and he was definitely one of them,” says Binny. The same guy called him later that week and invited Binny to do a TED Talk about his journey. “At first, I didn’t know what to give the talk on, but I wanted to share the joys of solo traveling with others and how it opens up your mind,” says Binny. After the talk, the audience even asked for his autograph. “I felt like a celebrity for five minutes,” he laughs.

On his motorcycle coffee tour of India and Nepal, Binny had 568 cups of coffee in 110 days. “I got up every morning and thought about where I was going to have my coffee that day. It was a beautiful experience,” he says. Although the company sponsoring the trip couldn’t continue supporting him, Binny wanted to continue the momentum of coffee education in India.

At the time, there weren’t many places to formally learn about coffee in India. In 2018, he started a small school in collaboration with his alma mater. “In 5 months, I trained 48 students. Five went on to open their own cafes,” he says. (That’s around a 10% success rate!) “I was happy to help some people start their own coffee journey,” says Binny.

But Binny wanted to go bigger and do something that could spread across the entire country, something that can contribute to increasing the consumption of good coffee and put India on the map of the coffee world. He’s currently working simultaneously on his podcast Coffee Protocol Podcast that is based on the coffee industry in India (inspired by Jessie Hartman) and a movie, as well as online coffee training, consulting new coffee businesses, and helping Indian coffee farms with post-processing methods.

His documentary was also shot from the back of his bike and the film is now in the stages of post-production. “I wanted more people to know India is a place that both grows and roasts coffee and I was really motivated to be the first to ever make a documentary about coffee in the country,” he says.

His advice for others taking on big projects is to take it one step at a time.

“Think about the things that scare you and excite you at the same time. It’s going to be adventurous but it’s also going to be worth it.”

Binny is an incredibly motivated, passionate, and busy guy so if anyone is interested in helping out with India’s first-ever coffee documentary, you can reach out to him via Instagram @baristaonbike.

To read more inspiring stories from baristas around the world, visit this link.