Hardworking, dedicated, curious, and funny, this is how Youngjun Cho strikes you when you first meet him. But behind his cheerful face and his beanies he likes wearing, there is so much more to discover about this special barista.

Youngjun Cho is a real “master of all trades”: he describes himself as an IT guy, who dedicates himself to marketing and website building. His background is in visual design, which explains his love for art exhibitions and his vast creativity. His interest for coffee began after an apprentice experience as a barista a decade ago, and that’s when he decided he wanted to step up his game and create something of his own.

So where does coffee fit in Youngjun’s life today? Everywhere, actually! 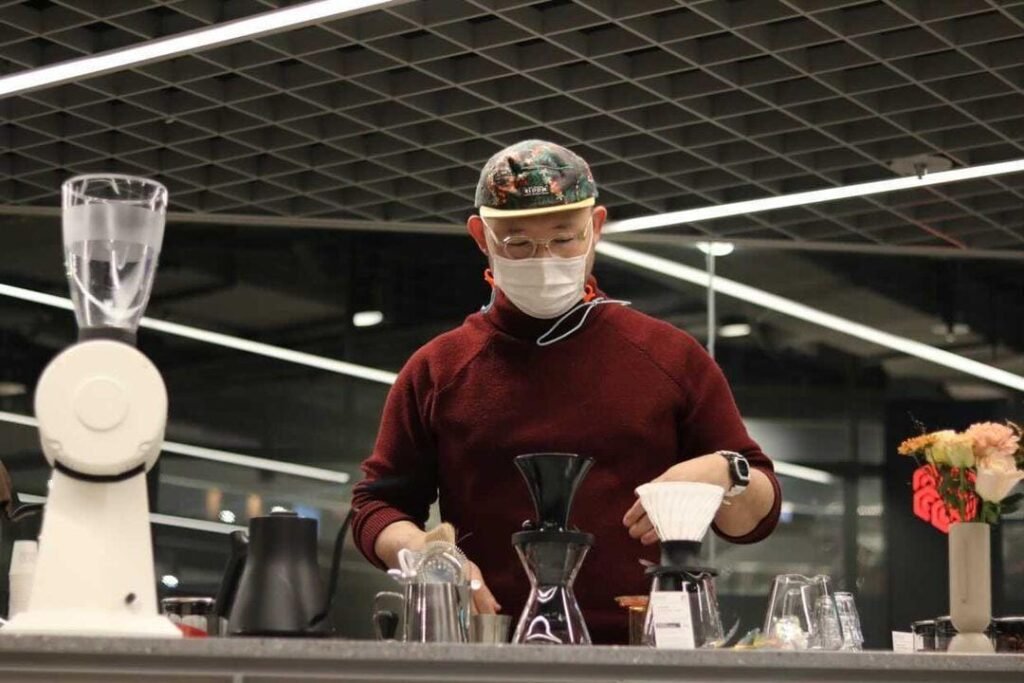 To give us an idea of who he works with, Youngjun explained that some of his partners include Brita water, a company that creates filtration systems for drinking water, and other partners, such as espresso machine brands and roasting machine companies. He funnily compares his business model to the well-known UK “Tesco” supermarket: he reaches out to green bean companies and, besides selling his own coffee, he sells other companies’ coffee.

What’s more, he shares some of the most important ‘I’M NOT A BARISTA’ values, since he aims to bring together people and companies not just from his home country, South Korea, but from all over the world.

His motivation to work in the coffee industry came from a wish, that of binding with the baristas, farmers, customers. His aspiration is to create a vast community, where individuals can share their knowledge with each other, giving everyone the possibility of getting their voice heard. In fact, Youngjun organises workshops and training courses, of which the goal is not to give out a certificate or a fancy trophy, but really to allow people to gain as much knowledge as they can.

We are not surprised to find out that Youngjun’s favourite part of his job is communicating with customers, roasters, and baristas from different cultures and countries. He is very proud of his coffee storytelling- he likes introducing new products or brewing devices and sharing his ideas with different markets.

A point he is especially passionate about is communicating with farmers: as much as there’s good coffee in the world, he reminds us that there’s also bad ones that can be improved. By voicing his opinion to farmers and by exchanging feedback, both parties can better themselves and make sure customers get the high-quality coffee they deserve.

Like many baristas and professionals from the industry, he has a special “caffeinated” memory that really stands out, which is his first trip to Colombian coffee farms.

“It was surreal! Before then, I had only seen the scenery of the coffee farms on the monitor of my computer and then I thought <Right, I’m here, it’s all real>”

At the time, he was working with a green bean importing company. He left South Korea for this business trip with his team, and soon enough, found himself loving the place so much that he almost became a tour guide, showing his travel companions around and translating everything for them to be able to deeply appreciate what they were experiencing. 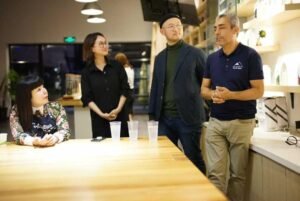 Youngjun chatting with his barista friends

While talking about his first trip to Colombia with a special sparkle in his eyes, Youngjun recalls having the best cup of his life there, particularly in Finca la negrita’s farm in Tolima. The farm owner was a former doctor, who had succeeded in curing patients from cancer.

He explains that the doctor was the atypical barista behind the most surprising coffee he had ever tasted: by applying his knowledge to the process of brewing, he managed to make coffee in a clean, precise, and tasty way. What amazed Youngjun was the way the doctor presented the coffee:

“Normally, a farm owner will promote his coffee by telling everyone -Look, this is my best coffee product- but this guy showed us the coffee like a teacher would do, explaining in detail what the processes consisted of and going through the procedure step by step. It felt like being in a seminar”

However, the secret behind this particular recipe was the flavour, which, funnily enough… did not resemble coffee!

“You know, some coffees just do not taste like coffee! When I tried it I thought to myself -What is this? This cannot be coffee- it tasted like liquified pepperoni pizza!”

[When we said he was a funny guy, this is exactly what we meant!]

On a less happy note, he mentioned climate change as one of the most challenging aspects of his future career. The weather changing and the environmental conditions directly influence harvesting periods, forcing farmers to plant at different altitudes.

Arabica coffee is in fact reducing because the fertile land is limited and the temperatures rising affects everyone’s work, from farmers to baristas like Youngjun, considering the final product people consume comes straight from these places. He reminds us that there is so much more behind coffee that needs to be addressed and we need to make a change together to continue to plant, grow, brew and drink.

We also asked him what his favourite type of coffee was, and this is when he warmed our hearts by saying “surprising coffee”. He likes to brew it at the end of the day, which is the moment where he puts his ideas and creativity on hold and dedicates a moment to himself and himself only.

The rest of the day is what he calls “the people’s time”, a time where he puts all of his efforts into sharing, communicating and creating, a time we believe more and more people should be dedicated to the coffee community.

We hope you enjoyed reading about Youngjun’s journey with coffee– if you want to find out more about his projects and missions make sure you follow @prismcoffeeworks on Instagram.