How weird that some of us don’t know how much we’re going to love coffee even if you grow up in favourable surroundings. Of course, family background isn’t enough. To be really good at something, you need to put in the work: learn, train, and focus on what it is exactly that you want to achieve.

“You know, I come from a family of coffee producers,” Ronaldo Hurtado told I’M NOT A BARISTA, “and for this reason, I was involved in coffee from an early age, but while studying I worked in a coffee shop because I always wanted to become a barista, so I started learning, and I competed in a regional barista competition.”
There were 11 participants and, with just one week of practice, Ronaldo came in at 11. “Not bad for the first time, I learned a lot there.” 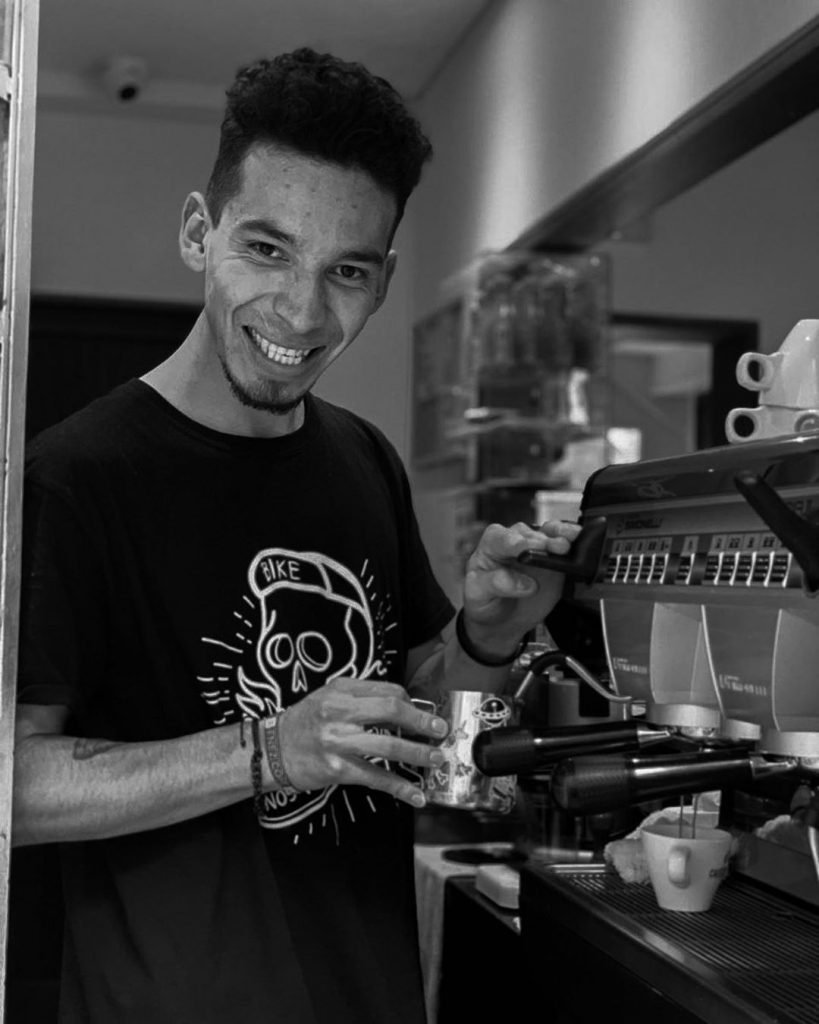 At the moment, he is a freelance barista. A couple of months ago, he left his job, and while he’s still thinking about all the things he would like to do, he’s working to create a free educational website for whoever might be interested, but that’s just part of it. “I also write articles for a few magazines, work with some coffee producers and, every now and then, I organize personalized coffee classes.” It seems like he has his hands full.

Whenever there’s talk of a new project, interviewing a coffee professional from another country, or cupping some new samples, Ronaldo gets very excited. For him, either of these activities means a day well spent.

When asked what success looked like for him, Ronaldo told us it meant when you enjoy what you’re doing so much that it doesn’t feel like work anymore. There’s obviously always going to be good days and not so good days, but these things happen.

Being a barista is not an easy job, as some might think. Ronaldo confessed it can be quite complicated and maybe even more difficult in producer countries than in any other place, especially since education in coffee is pretty expensive, and jobs tend to offer lower pay.

“For me personally, the challenge has been getting the education and then sharing with others what I learned these past two years”.

But how did life looked like before specialty coffee? Well, very different, it seems as he says he didn’t really like coffee much but started because he saw how happy it made others. Then for his 16th birthday, in 2015, everything changed when his father gave him a V60 as a present:

“I prepared my first coffee for everyone at home; I will never forget that day”.

After that it all kind of fell into place: he started to read a lot of books, guides, and everything related he could find on the internet, asking other professionals questions, roasting, making pour overs or espressos; Ronaldo believes coffee allowed him to become a more focused person.

“The first time I had a really good cup of coffee was when I got a job in the Laboratory, and my boss brewed a coffee in the Chemex, a variety called Catura Chiroso; the beans looked like they came from a Gesha, it was incredible: creamy body, very floral with honey and stone fruits notes, a lot of apricots. When I tried that coffee, I lost my mind, I could not believe that coffee tastes like this, before that, I had tried many other good coffees, but never anything like this, with such clear and easily to find flavours. I really really enjoyed it!”.

When we asked if he had a particular memory that he was fond of, Ronaldo said that it was no doubt competing for the first time in the National Brewers Cup Colombia in 2018 and coming in fourth: “everyone was saying where did this guy come from? it was so crazy”.

This is an achievement to feel very proud of, we agree, but Ronaldo himself also added being part of a coffee-producing family and being a barista to the list. He is continuously inspired by new research and learning opportunities and tries to add his contribution and help out the coffee world.

However, access to information and the ability to learn wasn’t always at hand for him, he told us, but he understood that he would not be able to advance if he continued to go at it alone. So he reached out. He started traveling and looked to create new connections and finding support from people willing to share their knowledge with him also. This is something he does on a daily basis now.

If he’s not talking or making coffee, Ronaldo told us he enjoys cooking vegan meals for his family and friends, watching movies in a non-native language so he can still squeeze in a bit of learning, taking photos in the city or practicing tricks with his mountain bike. He’s also a big fan of listening to podcasts about sustainability and climate change.

If someone wants to meet him or just drop by and say hi, Ronaldo said he’d be more than happy to share his knowledge over a coffee, and if that’s not possible face to face, he encourages you to send him a message: “, I always want to help.”