I’M NOT A BARISTA is honored to interview Nathierah Fredericks, a brilliant woman from Cape Town who was the team leader of the content writing intern group. Before we say a bittersweet farewell to this amazing writer and friend who is moving on to an incredible opportunity, we would like to answer this question for our readers who have read many of her stories without knowing who the person behind the author is. The question is: Who is Nathierah Fredericks?

Nathierah used to be a woman with little to no experience in the coffee world. Although she was an avid coffee drinker, she was usually drinking instant coffee. She would only get a proper cup of coffee from a café if she was going to work. Even when she ventured away from instant coffee, she knew little about the specialty coffee world. 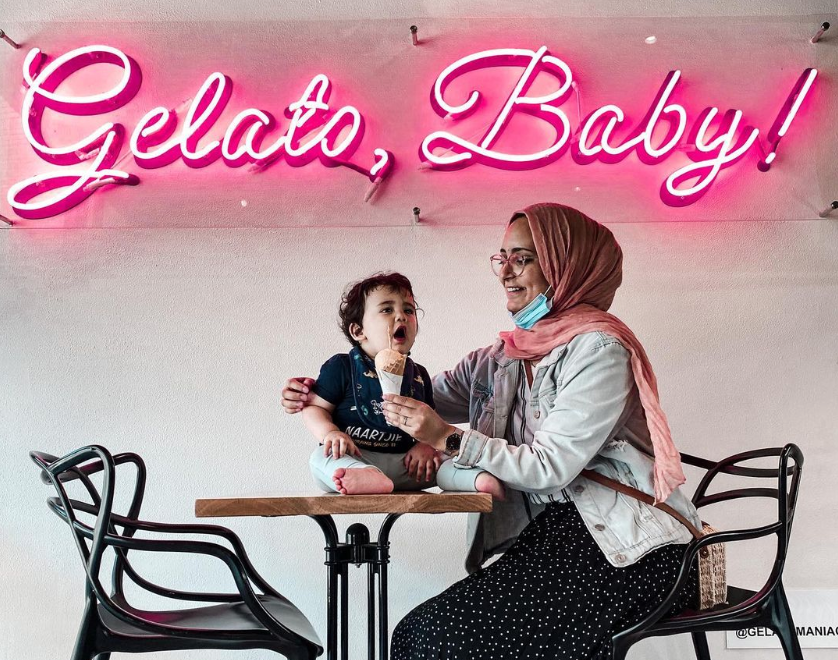 Nathierah Fredericks and her son

So how did a woman with very limited knowledge of the coffee industry become one of our very best writers? What made Nathierah apply to I’M NOT A BARISTA?

During Nathierah’s final year of being a creative writing major, she decided to take on an internship. I’MNAB grabbed her attention for two reasons:

Unfortunately, right before the interview, tragedy struck Nathierah and her family. Her aunt passed away around the same time Nathierah was supposed to have an online interview with Micky, the founder and CEO of I’MNAB. Despite this loss, Nathierah still made the time and effort to show up to the interview and try her best, unbeknownst to Micky. Apparently, she blew Micky away because he offered her the internship right then and there.

On her first day, Nathierah had no expectations. Although she quickly realized that she didn’t know nearly enough about coffee as she thought she did, she went in excited to learn and determined to give it her all. When she joined, she met Elias Khlif , the team leader prior to Nathierah. Nathierah said,

“‘Do you need some help? What can I do…to make this easier?’… I was like ‘Wow, this is what a team leader looks like.’”

Under Micky and Elias, Nathierah thrived. No one was micromanaging her or standing over her shoulder. She had to make herself accountable and create her own hours. Although that may sound too lackadaisical to some, Nathierah always completed her work on time. Because of this, she and her fellow colleagues were able to trust each other and form a closer bond.

When asked about her favorite moments at I’MNAB, Nathierah said reaching 100% of our goal a couple of hours after we launched the product MOMENTEM filled her with such joy. She had been working on this hand grinder from the very first day of her internship and seeing it do so well made her ecstatic. She said,

“I think I was in the mall and I was doing some shopping with my husband and my son, but…I [kept] refreshing my phone.”

Although her husband tried to reassure her by saying she could check the page later, Nathierah was adamant and exclaimed,

Another moment that stands out to her is having the experience of writing André Eiermann’s coffee story, which tells the tale of a man who is both a barista and a twenty-four-hour marathon runner. His story will be published soon.

However, she loves all the stories she’s written; they all have a special place in her heart. After asking what Nathierah will take away from this internship, she said,

“I think definitely the way that Micky and Eli have treated their…colleagues… employees… We were a small team, but a big family…and you really really do feel that way when you’re working in this company.”

It is so easy to feel like there is a hierarchy in the workplace. But when it came to Micky and Eli, everyone felt like an equal. Nathierah plans to find that similar work environment in other jobs going forward.

Nathierah also grasped some leadership skills once Eli left and she became the team leader. Although Natheriah never felt like she had to direct and give orders to her team, she would have to make some of the bigger decisions for her team. Also, on a more coffee-related note, now that Nathierah has a better understanding of the coffee industry and what it takes, she looks for single-origin coffees while grocery shopping, such as coffee from Kenya or Colombia.

Furthermore, Nathierah hopes that consumers will become more aware of the time, effort, and cost it takes to make a single cup of coffee. Nathierah admits,

“I was one of those people… I had no idea of the processes…the harvesting, the planting…the washing of the coffee beans.”

It is truly mind-boggling

“how little these people get paid and it is a million dollar industry.”

After talking to Tanty Hartono and Rivo Trie Septiadiguna, two people deeply immersed in the coffee industry, she discovered that the coffee cherry pickers in Indonesia receive a wage of thirteen cents an hour. They are working to afford food for that very day.

“They would need to work five hours just to afford a kilogram of rice.”

Awareness needs to become more contagious. There are so many people behind that cup of coffee, and they get no recognition.

When asked if Nathierah is excited about her next step in her career, she confessed that she doesn’t want to leave, but needs to think of what’s best for her and her family. Soon, Nathierah will be moving to Saudi with her husband and son. But before she makes the big move, she will be beginning her full-time, remote job as a content writer for a media publishing company where she will write articles regarding celebrities, lifestyle, and travel.

Eventually, she would like to pursue her dream job; she wants to become an editor. Nathierah loves allowing other people’s writing to shine and believes that the role of the editor makes an author’s work really flourish and blossom.

When Nathierah is not working, she is spending time with her husband, her son, and her friends, or can be found binge-watching k-dramas, Turkish dramas, or Spanish dramas. She loves the beauty of different languages.

Here is a list of the coffee stories written by Nathierah: