Lars Aaen Thøgersen is the Chief Innovation and Circular Transformation Officer at Löfbergs, and Head of Communication at Peter Larsen Kaffe. Lars’ primary mission in the coffee industry is to determine what is needed to innovate businesses in a way that gives back value to coffee farmers in a sustainable way. 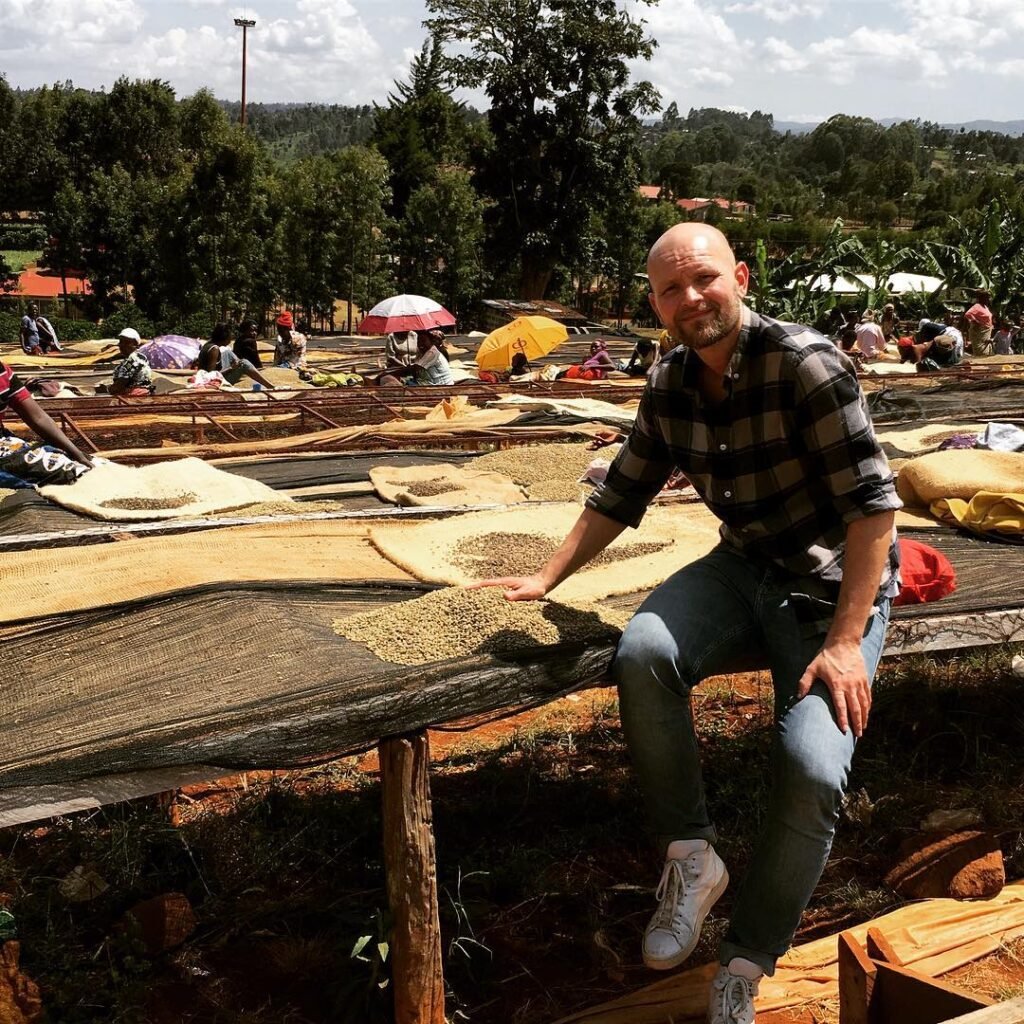 The entrepreneurial bug bit Lars in the early years of his life and he has since started a number of companies. One of them was a sales company he built from the ground up, tasked with the distribution of Saeco fully-automatic machines into the Nordic countries. This is when he started a deep dive into the world of coffee, which began with the charm of the Italian coffee lifestyle. During these years, he accounts for incredibly valuable and interesting times working with the engineers of Italian coffee machines. As a result, Lars became engrossed in the Italian roasting industry and started importing coffee in addition to coffee machines into Denmark. He remembers that at a certain point he became so invested in the lifestyle of coffee that he wanted to physically be a part of the coffee community and its craftsmanship – so he opened his own coffee shop.

Lars’ first coffee shop was a mobile business that, after a while, thrived and managed to make it into all the festivals around the city. He worked as a barista for several years in his own little mobile coffee shop, while running his many other businesses. Some short time later, he was approached and offered an interesting opportunity to become a part of the Peter Larsen Kaffe organization as well as Löfbergs – one of the largest family-owned coffee roasters in the Nordic countries where sustainable development is one of their core values.

Initially, Lars admits he was drawn to what he calls the “downstream” part of coffee; the lifestyle of coffee, its taste, the different varieties thereof, and even the work as a barista and meeting coffee lovers. However, the deeper he dove into the world of coffee, the more interested he became in all the different dimensions of the coffee industry. This is when he started working more purposefully and more intensively with sustainable development projects and initiatives within the coffee community. He accounts for some tremendous years working in Kenya as well as running point on several projects in Colombia.

“What is so desperately needed is that we innovate our business in a way that gives back value to farmers.”

Lars has been working with coffee for 20 years and he confesses that it isn’t equally fun every day; there are many trials and tribulations along the way which make it all the more interesting.

“It’s fascinating too, I mean honestly, I believe that my work is also my hobby.”

We asked Lars his professional perspective on a topic that’s been making its rounds lately in the coffee industry and on social media: Can we pay more for our coffee to somehow help the coffee farmers? At first glance, this may seem like the most obvious and simple solution but according to Lars, it’s really not that simple – “it’s a complicated and complex system”.

A concerning issue surrounding coffee is that the majority of the global population drinking coffee, see it as a whole when in fact coffee itself is only part of it. An important element to consider and appreciate is that each coffee region has a specialty with its own indigenous characteristics.

“Coffee is not just coffee,”

it’s a globally traded commodity and while this international trading system may give coffee producers and roasters stability in terms of measuring and monitoring coffee from different regions of the world, it also generally keeps the coffee prices low.

“There are so many different aspects into this and could probably be different if we didn’t see coffee as just coffee.” 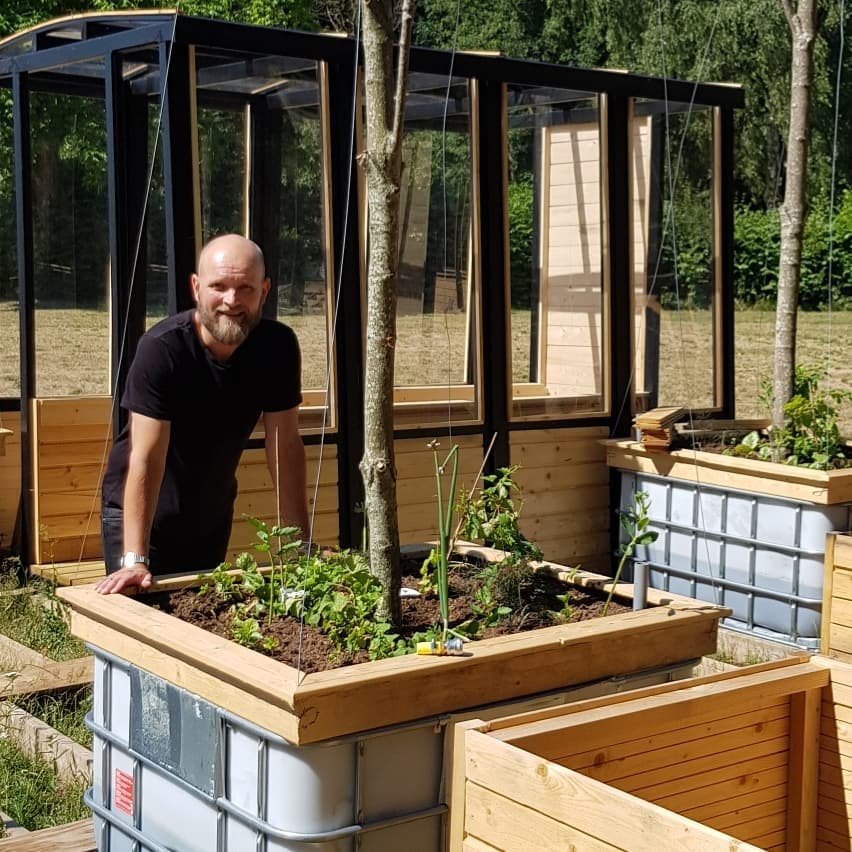 Lars Aaen Thøgersen plays a vital role in the Circular Coffee Community, a non-profit network concerned with exploiting the full potential of coffee without waste and giving back value to the farmers. The Circular Coffee Community reports that only 0.4% of what we spend on coffee goes to the coffee farmers. Despite coffee being a multi-billion-dollar industry, the prices paid to farmers are so low that they’re struggling to make a living. Apart from the farmers, there are several key players in the coffee supply chain. How do we make sense of where all the money goes? There are many layers to consider when evaluating the profit distribution in a coffee supply chain and as a result, there are a lot of costs related to running a successful value chain. Lars notes that one of the strong points in the coffee business is that it has pretty good traceability.

“Our supply chain in Löfbergs and Peter Larsen Kaffe, for instance, we can trace every single coffee all the way back to the farm.”

When considering the magnitude of the coffee industry, one may argue that a blockchain can assist in enhancing the transparency within the coffee industry and possibly lead to an improvement in the lives of those who receive an unfair share in the industry. A blockchain is an immutable, digitally distributed ledger that facilitates the process of recording transactions and tracking assets in a business network. Lars divulges that they’ve spent a lot of time and effort investigating the blockchain. While the terminology of the blockchain is promising, they find that the technology itself is not mature yet. In addition, there are some environmental climate issues related to it – for one, the energy consumption is enormous. As we know, Lars advocates for sustainable development, and so the energy consumption serves as a huge drawback in the use of blockchain technology.

The Circular Coffee Community also informs us that we use less than 1% of the many nutrients contained in the coffee plant; leaving more than 99% that goes to waste. At the consumption level, some of the remaining nutritional value is actually in the spent coffee grounds. This information has sparked an inspiring movement in the Nordic regions where many new startups have invented new ways to make use of the spent coffee grounds. The spent grounds, however, are only part of the many resources throughout the supply chain that end up as waste. Lars is confident that as an industry, these resources could be put to use to secure better livelihood and new income streams for the farmers.

“It’s also how you take care of the environment, how you secure that your environment is not just being destroyed while you grow coffee.”

Another community that Lars mentions is the Era of We community whose mission is to connect and empower their partners bound by chemistry to generate shared value, new revenue streams, and ultimately, provide an unmatched coffee experience for the people around the world. The Era of We community facilitates a transparent way in which you, as a consumer or a cafe, can have direct access to the farmer and engage in direct dialogue if you’re interested in making the effort to learn more about your coffee. At the moment, Lars sees the Era of We community as the best available solution to bring farmers to the table, and empower them and their brands.

Because the coffee industry is such a huge international trading system, it’s unfortunately not possible for coffee companies alone to change the system. However,

“We can try to adapt and we can try to improve how we act into that system in the best way.”

This is what the Circular Coffee Community is all about – a community aimed at driving innovation for the circular transformation in the world of coffee. As an organization, they invest time, money, and effort into understanding how the remaining 99% of coffee resources can be put to better use.

The vision of the Circular Coffee Community is to transform the coffee supply chain into a circular supply chain. If you share this vision, like us, join the community and be part of the solution.

It’s hard to believe that for Vivito Yeptho, Co-founder and Managing Director of Nagaland Coffee, coffee used to be nothing more than a black beverage with a swirl of milk.…
Notabarista
Coffee Stories
7th July 2022

Michalina Sujewicz, a Youtuber and former barista from Poland has become one of the few who was fortunate enough to be able to take a break from the customer service…
Emma Niro