When we talk about commitment and discipline, people outside of the specialty coffee community wouldn’t think these are qualities necessarily attributed to coffee professionals. But it is precise because of such intensity and desire to know more, learn more, DO better, BE better – than some of those pros end up becoming World Champions.

Of course, this is an over-simplification on my part and, of course, training exhaustively and getting that routine down to the very last second have a huge say in the matter, but at the end of the day, it is that extra step you’re willing to take, that tiny sacrifice in your daily life that will set you apart from all the other well-prepared competitors and give you an edge.

The protagonist of my story is a true source of inspiration. There was no luck, no alignment of stars involved here, just a high dose of perseverance, willingness to go all in and incredible self control. All this and an amazing love for coffee is what helped our main character get straight to the top and win The World Cup Tasters Championships in 2019.

His name is Daniel Horbat and this is his coffee story. 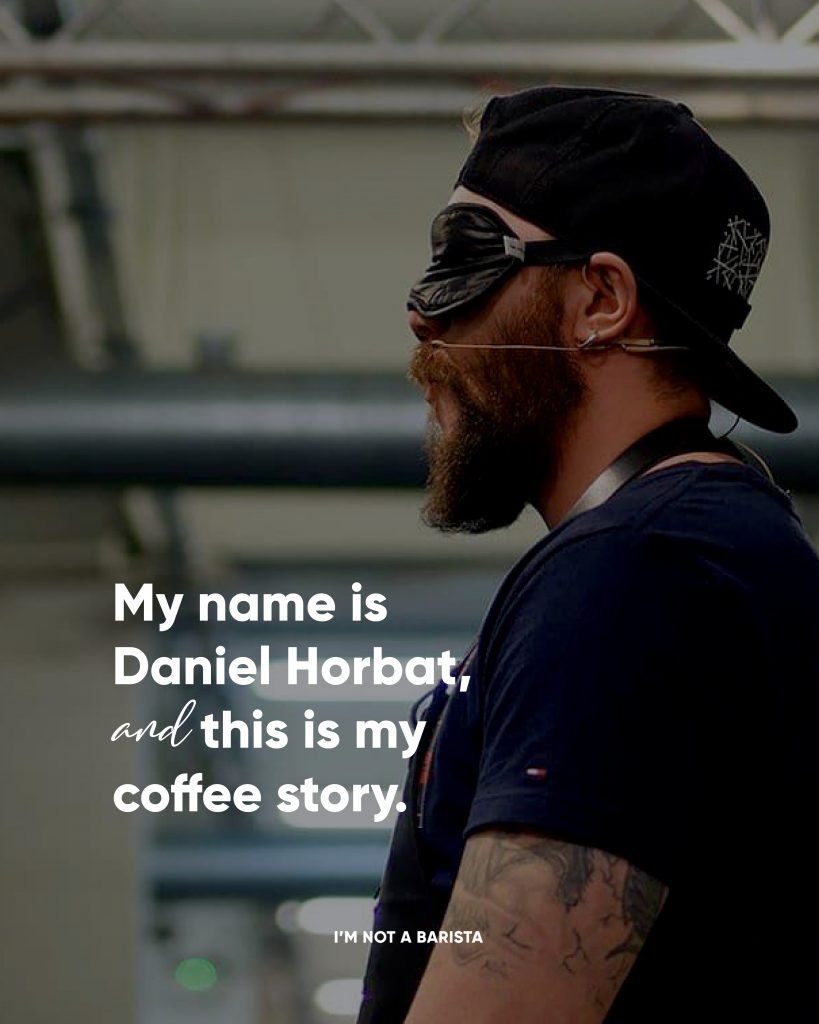 Working in the hospitality industry came just after college for Daniel Horbat, as he, just like most of us, needed some help paying for his day to day and paying for his University taxes. Since then, 15 years have passed.

He also dis some work as a bartender in his home city back in Romania, as well as in Santorini, Greece: “I did not have much contact with coffee back then, I was more focused on mixology and cocktails. I was even able to throw a bottle in the air, do a bit of flaring.” Even without having a lot of information when it came to coffee, Daniel admits having been attracted to it from the very beginning, but it wasn’t until meeting his fiancé and moving to Ireland in 2012 that he actually discovered the beauty of  specialty coffee.

He moved from company to company, small and large, learning more every day, but also sometimes failing, like the rest of us:

“I remember at my first interview I had to make three coffees with three different latte arts on them, but I failed miserably. Ehh well, what can I say, it happens even to the best of us”. And don’t we know it?!

His first ever competition was in Latte Art back in 2014:

“At that time I didn’t have all this knowledge about sensory and cupping, but this first competition must have ignited something inside of me because year after year I was challenging myself to get better and better, to compete more and more.

I truly became fascinated by coffee and its delicious complexity when I learned about origins and how every bean is different in taste and aroma from one another, depending on numerous factors.”

“I could have done better but I changed my mind on a few cups instead of going with  my first choice.” 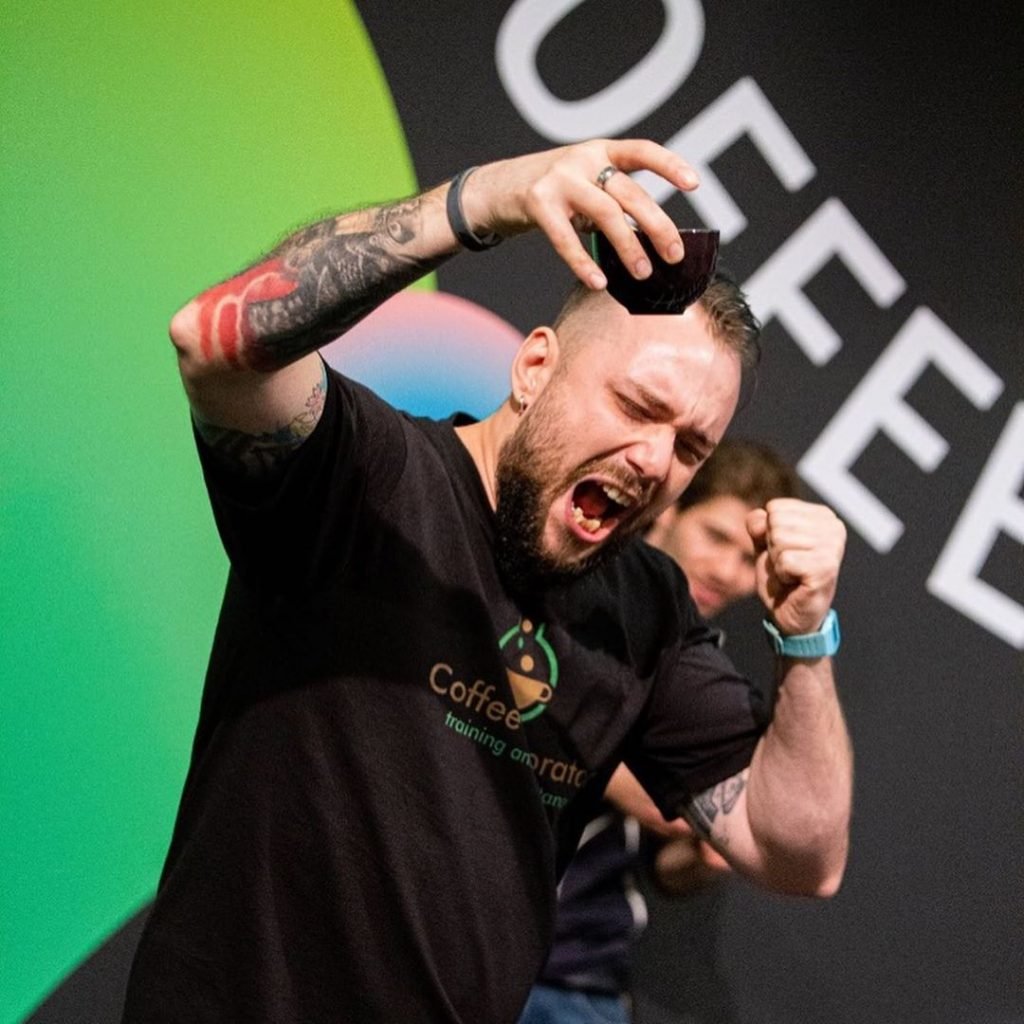 However, it was 2019 that would prove to be Daniel’s time to shine.

“Once again, I won the nationals, with a perfect score, every round 8/8 in record time. Again, I had the opportunity to represent Ireland, this time in Berlin, and after so much hard work and dedication I was fortunate enough to bring the trophy back home”. A huge accomplishment.

Nowadays, having been isolated during the locked-down, Daniel jokes about how his current responsibilities involve making sure that his Call of Duty team is under sound leadership.

All jokes aside, until recently he was working behind the machine as Head of Coffee with some responsibilities including keeping the coffee shop up to standards, ensuring, as he puts it that “only quality leaves our hands and that the guests were receiving the experience they deserved.” This implied a combination of things: “education, knowledge, and hospitality. It’s all about customer service and making the consumer feel good, it is about telling the story behind the bean”. I fully endorse this statement ONE HUNDRED PERCENT. Where would we be without our customers and our coffee stories?

His favourite part of his daily work, Daniel admits is being in contact with people:

“Getting to know people and making friends. Being on stage for so many times with all these amazing coffee professionals and building up new friendships, it just blows my mind and fills me with happiness every day”.

But what about success? For him, as for a lot of us really, success translates as being able to do what you love and call it a workday: “ I don’t have one of those 9-5 jobs where you do the same thing every day, and I am so blessed to experience the process of daily discoveries. To be able to work in an industry where you get to be so creative… an industry that changes every day. Also, for me at this time in my career, I can say that success is the fact that I am being able to chart my own course freely. That we will get to live the life we truly want and not the life that we settle for.”. One can only hope, Daniel!

If we’re talking about the most challenging aspect of his career, it’s probably the uncertainty that Covid-19 has brought a short time after this champ decided to go all in and create something by himself:

“I always used to work for somebody else, but I decided recently, to quit my job and do something in which I will pour my heart into, something that won’t necessarily bring me financial rewards, but personal satisfaction and fulfillment knowing that I will be trying every day, in my own small way, to make a better industry. Unfortunately, I didn’t even start, and all my projects are on hold; I think I never experienced such a challenge in my entire career before, not knowing what I will be able to do or not, so I am just waiting it out to see what this world will be like after before I decide in which direction I will move towards”. It sounds like quite the challenge indeed.

Life before specialty coffee appeared to be like any other. Daniel admits it was just a way to help him pay for the bills; he never imagined that after clocking out, he would STILL continue to think about it: “I wasn’t excited to go to work and I would not see myself in 10 years’ time still working in the industry”. However after he discovered the wonderful world of specialty coffee, everything changed: “ suddenly it was more than just a job. I was excited. I had a passion. I was craving more. And I can’t believe that after all this time I still feel the same.” 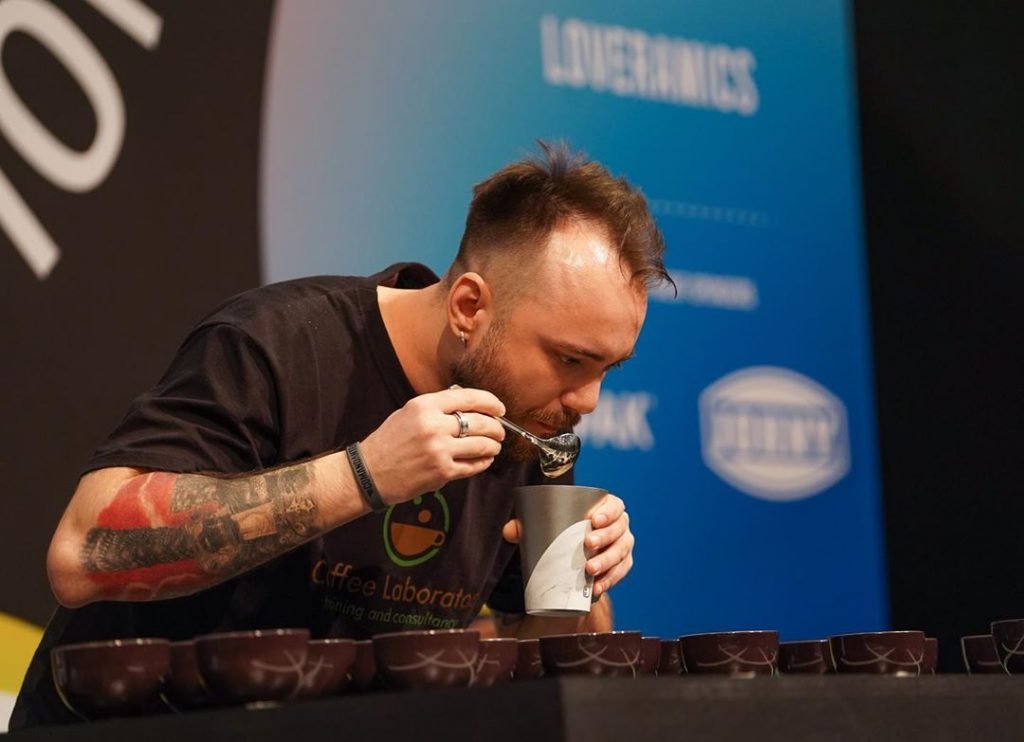 Everybody remembers that first cup of really good coffee. When asked if he remembered his, he said he remembers being amazed: “ I couldn’t believe that you can find those floral and fruity notes into a cup. Honestly, I couldn’t believe that it was coffee. This was the moment I decided to go on the specialty road and ingest as much information and practice as much as I could. It was definitely a turning point in my career in the industry”.

When it comes to a particular moment that stands out in his memories, Daniel his first trip to a coffee farm. Ally Coffee’s sponsored Origin coffee trip given to all World Champion winners had quite the impression on him:

“I can’t recommend it enough to people; just go and visit the farmers if you have the opportunity. Imagine a week through the Colombian coffee jungle, with no phone reception, no Instagram access, and I didn’t even care. Heck, the airline even lost my luggage for a few days and I wasn’t even bothered… this is how much I was absorbed and hypnotised by everything that was happening around me. Now I look different at a cup of coffee, I know all about the hard work those people are putting into it, the sweat, the love and passion, the loyalty to the craft!”.

Must have been quite the experience. What makes him feel most proud is, of course, coming in first at the World Cup Tasters Championship in Berlin, 2019. This is, he tells us, not for having won a title, but “for the simple fact that training for the World Cup helped me learn discipline, humility and how to trust in myself. I have been focusing all my energy on it for the past few years. I had ups and downs on this long road, but somehow, I always managed to stay motivated, strong, and continue learning more. Now I can say that nothing beats the moment when I was handed the trophy – it made me understand that it was worth it, that it hadn’t all been for nothing, and this somehow gave me the feeling that if I believed it and trusted myself enough I can do anything I put my mind to.”. 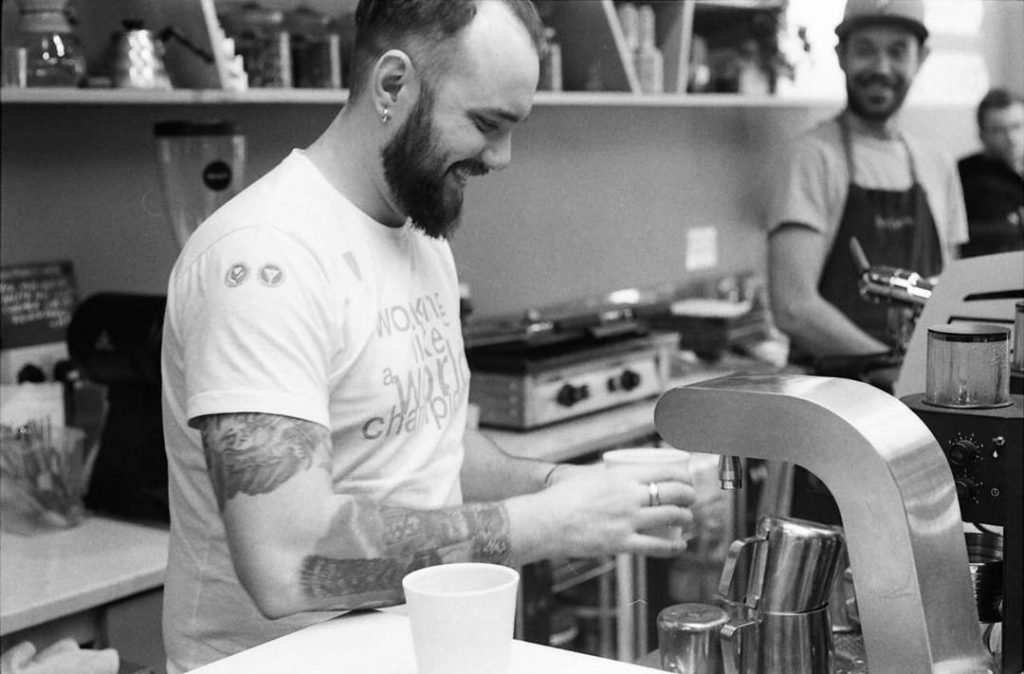 Daniel Horbat’s love for the industry inspires him every day. It is his strongest desire to be able to reach more people and help them to understand the story behind the bean: “my respect for how hard farmers work, my passion when it comes to talking about and learning all about coffee are a few things that get me out of bed each morning excited to start working. As I said before, coffee is not just my job, it is my passion”.

But what makes Daniel Daniel if we take away his coffee? “When I am not slurping coffees, I like spending time with my fiancé, playing Call of Duty on PlayStation, going for walks, and traveling. I can’t wait for the restrictions to be lifted and be able to finally plan my next trip. I love listening to music as well, I am constantly adding new songs to my ‘’Favorites’’ Spotify folder. As for books, I am not going to lie, reading is not my forte; except for the mandatory ones in school, I’ve only read a few books and half of them are coffee related. At the moment I am waiting to get my hands on Andre Eiermann’s book”.

If someone wants to meet him in person just know that Daniel up for it: “Nothing makes me happier than people interaction. I love talking; talking about coffee and not only. Not many people know that my nickname, translated from my mother tongue, is ‘’Words’’ (Vorbe)”, he jokingly added. “I consider myself being an extremely friendly person, so I will love nothing more than seeing people pop in for a visit just to say hi or have a chat”.

So if you’re ever in Dublin, go say hi. Oh, and tell him I’ve sent you

This coffee story is edited by Ronița Dragomir