“Even if my hands were shaking, I still managed to do a respectable job and become the new Italian Latte Art Champion”

Carmen Clemente has always put her passions first. Even before she entered the world of latte art, when her love was cocktails. She moved from Southern Italy to Milan, to have a bigger chance in that world. A journey of over 10 hours didn’t stop Carmen and her passion, but she knew that once there, she would have to endure many more challenges.

To support her dream, she worked in a call center for years. For Carmen, having two jobs was exhausting because she spent most of her days working and had no time for herself – but she knew it would all be worth it. She endured tirelessly until she finally managed to save enough money to open her own business. In 2007, she invested all her savings to create an all-female catering company, it was a big risk and one she wasn’t sure would pay off.

Although this was a huge step into the unknown, she was happy because it finally allowed her to focus solely on cocktails and leave her call center job. Her decision turned out to be so successful that she soon opened a bar in Milan. At that time, Carmen did not know much about coffee hence she decided to attend a coffee training. This has opened a door to a brand-new world: Latte art.

A couple of years after, a girl called Manuela Fensore started to work in her bar. Manuela was an exceptionally talented person and she instantly developed a fascination for latte art. Little did Carmen know that Manuela would become her business partner and that from there, their path would change. Carmen and Manuela shared the same passion and they both wanted to improve their skills. This brought Carmen to come upon Luigi Lupi, the “Father of Latte Art”.

Luigi is known in the coffee world to be the first person to develop latte art. He invented classic designs like the Tulip, which became the foundation of modern latte art. Meeting Luigi Lupi was a turning point in their lives. Luigi saw potential in both but saw in Manuela that special something that could make her a champion. He became her mentor and under his guidance, she trained extremely hard. Carmen watched her friend as she trained for 12 hours a day. “I was surprised by the dedication Manuela showed during that period,” she admits,

Carmen saw Manuela’s commitment and pushed her to start competing. “In 2017 we participated in our first latte art competition. We both arrived in the final, where we competed against each other. As always she beat me and I arrived second.” The two have kept training together and supporting each other since then. Manuela’s talent could not be stopped. Later she won the Italian Latte Art Championship and in 2019 the World Latte Art Championship. Carmen has always supported Manuela and there was no one happier to see her winning than Carmen. When Manuela won the World Latte Art Championship, Carmen was over the moon. She selflessly wanted Manuela to win the next world championship too but she had something else in mind…

Just after the victory, Manuela said to Carmen:

“I reached the top of latte art, now it’s your time to shine. I want to train you so you can win the Italian Latte Art Championship next year”.

And as Carmen did during the last few years, Manuela has stayed by her side all the time to help her achieve this goal.

“She has been very patient with me and corrects many of my mistakes. I don’t have the same perseverance of Manuela, but for the Italian Championship I’ve put all of myself into training.”

“I perfected my latte art skills. I learned how to have the perfect milk texture, how to obtain the optimal contrast on the cup, the ideal temperature of the milk which is key when pouring such a complex figure.”

The next step was to select the design Carmen will compete with. In modern competition, latte artists create extraordinarily complex designs and each artist has developed a very distinctive touch. If Carmen wanted to win, she had to create a design that would impress the judges. “I can’t draw, which is a downside for me. So, I take inspiration from other latte artists and transform their designs using my imagination,” she explains “I love to do an upgrade of the design I see. But for the competition, the design must be completely original. Luckily, Manuela has assisted me a lot during this process”.

Training for the 2020 Italian Latte Art Championship has been tough for Carmen. She knew that her technique was superior to her competitors, but she also knew that during competitions there are so many factors that can make the difference.

“For me, it was the emotional part. It’s fundamental and I had to work a lot on that. It is hard to stay calm in these moments, the heart is racing but the hands must be steady. It really makes the difference in front of the judges – I knew this could make me lose the trophy.”

Furthermore, the Italian latte art world is extremely competitive and baristas do not help each other. It is rough for everybody. Although in the last competition, Carmen saw a change in the right direction. She hopes that competitors will increasingly adopt a more positive attitude.

“In the BarLady Academy, we train baristas in latte art and teach them to support each other. Even if this person is a competitor, this is not a problem because I would love to see how my tips help him or her be a better latte artist.”

When the day of the 2020 Italian Latte Art Championship arrived, Carmen was still working on the psychological aspect of the training. The minutes before the competition has been really stressful for Carmen. Her mind was playing tricks on her and she feared that she would not have the mental strength to win the competition. She knew that everybody’s eyes were on her and people were expecting her to win. The pressure on Carmen was high and she could feel it all.

However, when it was Carmen’s turn, she found concentration and determination in front of the judges. She remembered what she learned during her training. Breathe to keep emotions under control, smile to the judges, and maintain composure. At the end of her turn, she cried with joy and let all her emotions loose. “I was not sure that all my preparation was enough to win, but it was.” This was the crowning of a beautiful dream for Carmen and great satisfaction for Manuela too. 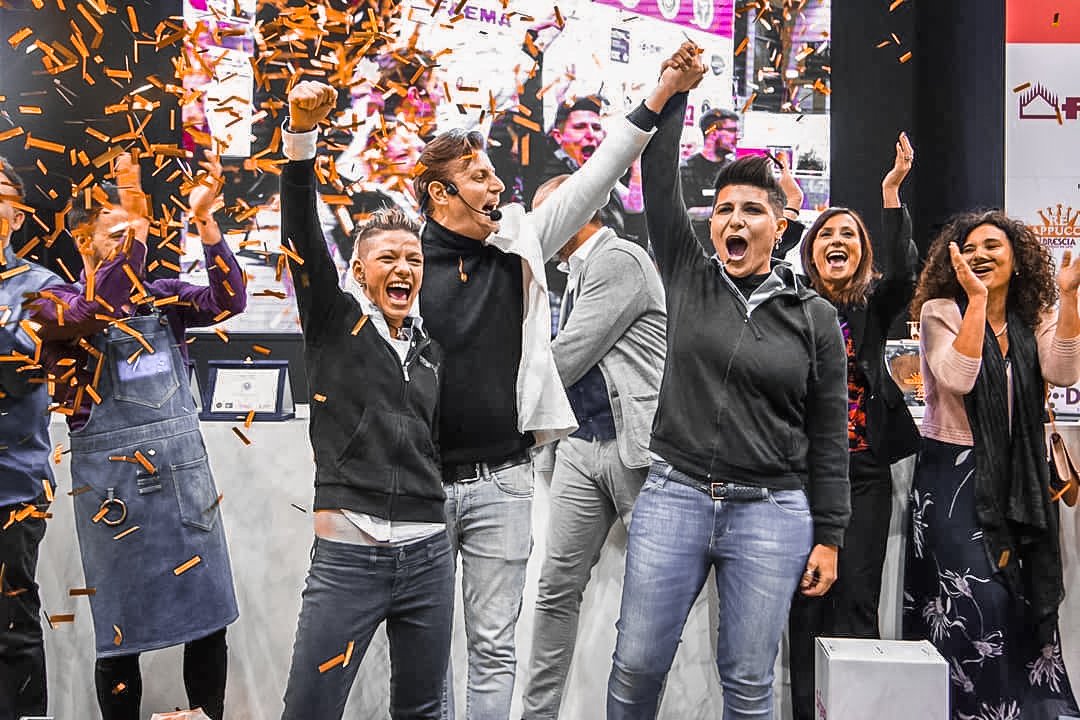 Carmen is already training for the next World Latte Art Championship, which has been postponed due to COVID, as always with Manuela on her side. What after? Carmen has not forgotten her passion for cocktails. “Luigi Lupi has been telling me for years that I have to compete in the Coffee in Good Spirit Competition,” she reveals,

“If the 2020 Italian Latte Art Championship did not go well, I would have probably attempted to participate. But in the future, I will definitely participate in Coffee in Good Spirit. Before competing, I have to increase my coffee knowledge and I am already thinking who can help me with this goal.”

If you want to learn more about Carmen and what will happen next in her journey follow her on @carmen_barlady, or if you want to be trained by the Queens of Latte Art, go visit their website http://www.barlady.it/