When asked what coffee means to him, Mubirigi replied with, “it is my life.” “I filter coffee, not people.” he considers coffee is healthy.

Mubirigi’s coffee journey started in 2015, thanks to his inspiring brother, a humble and passionate barista. ‘He used to pay our bills at home while I was hardly coping in a graphic design company.’ Mubirigi was wondering how his brother was so successful in the industry, and he asked him what the secret was. According to his brother, the secret was ‘coffee,’ explaining how coffee represents health and wealth at the same time!

At the time, Mubirigi explains how his vision was limited and he wanted to pursue work only for survival. Seeing his brother being a successful barista who loves to impress customers with his latte art, Mubirigi has been attracted to the world of coffee bit by bit. That’s when he started doing his own research about specialty coffee by visiting different coffee shops.

‘I am really lucky to work with a skilled team, and I wish to be a professional barista in the near future.’

Looking back to his commencement, Mubirigi still remembers the 15-hour shifts. The main challenge was the fact that he had little knowledge of specialty coffee. When he started in Oman 🇴🇲, he worked as a waiter and barista in a small cafeteria with only a mini espresso machine. The working conditions were strict; he was not even allowed to have a cup of coffee which represented the wake-up call for him… ‘who am I? A barista or not?!’.

‘It wasn’t easy at all for me, but my love for coffee kept me going. Coffee is a part of my life, and sometimes I’m wondering what my life would have been now without it!’

Whenever he was having some spare time on his hands, Mubirigi was roaming the streets of Oman, searching for baristas who were keen to share their experiences and teach him how to use specialty coffee equipment.

He wanted to learn more about the coffee industry, so his next destination was Dubai ! What inspired him to choose Dubai was the people – ‘they know coffee, and they drink more coffee than in Oman’. His journey as a senior barista in Dubai lasted 1 year and 8 months until his contract ended. He returned to his country and further developed his knowledge about coffee by taking a course for roasting. 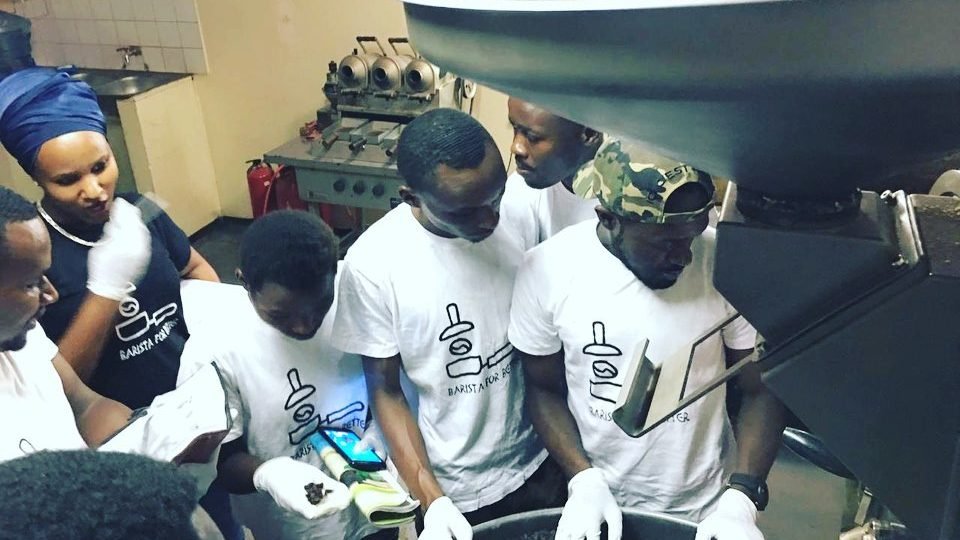 Now he is running a large coffee shop called Ace Coffee in Kuwait 🇰🇼 , which has 3 branches. He works with several skilled baristas from foreign countries such as The Philippines, Rwanda, Kenya & Uganda! He is beyond excited to be able to work with all types of specialty coffee equipment.

Mubirigi believes he has to stay updated in the industry and make even more progress.

‘I will get everything because coffee is wealthy.’

If you are ever in Kuwait, you can find Mubirigi at Ace Coffee Kuwait for a coffee and chat.