Brewing with grit and beauty: Betty Wee’s journey from graphic design to building her own coffee brand.

In her teenage years, Betty Ween left her hometown of Miri in Sarawak, Malaysia. Her dad had found work in neighbouring Brunei, and the family was moving there to stay together. Betty had always liked expressing herself through design, so when the time came to attend college, she headed to Australia to study communication design. She recalls bursting down the street after lectures to see people enjoying themselves in the many cafes around town. Fuelled by exploration, Betty liked to get lost in the city with a camera to capture the urban scenery.

After graduation, Betty landed a job in Singapore as a graphic designer. While she was elated to finally settle on what seemed like an ideal job, Betty Wee struggled to adapt. So she left. 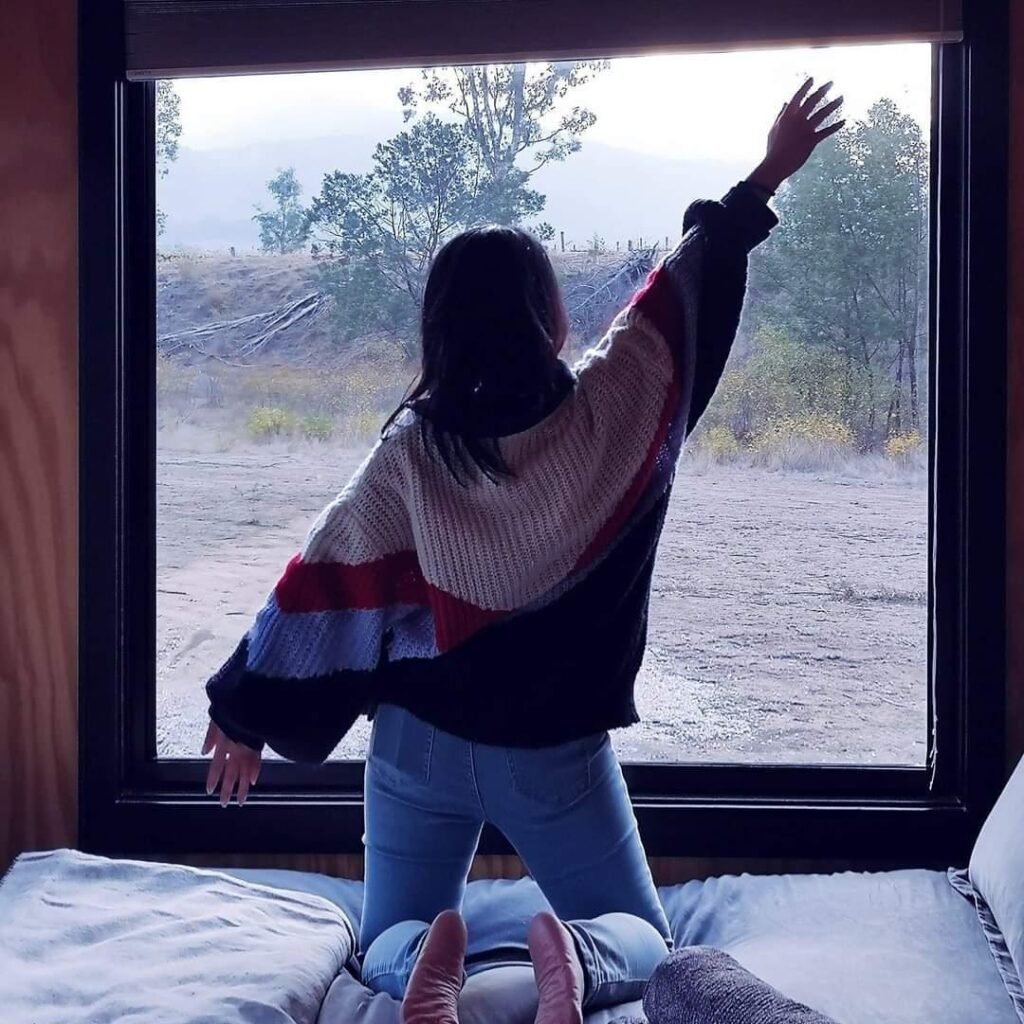 At that time in Singapore, the specialty coffee scene had just cracked open, and it was hard to get a job in the industry. Betty feels that people were unwilling to share their work then, unlike today, where it’s easier to learn from the professionals. Betty wanted to enter the coffee industry, but she had her work cut out for her.

Not being able to get a barista job, she decided to try her hand at another F&B role. She got a service gig as a waitress at an Italian restaurant, with the sole aim of polishing her service skills for an inevitable barista job. She credits her manager to instil discipline in her work ethic, which has helped her maintain high standards in subsequent service roles.

With this new skill, she managed to find her first job at a local specialty coffee house in 2014. Here, she was caught in a situation. Due to her lack of coffee training, she was initially not given any opportunity to use the machine. Since the environment was not conducive for learning, she had to find a way to prove herself.

On a part-time salary, Betty resorted to self-funding her training at the Bettr Barista academy. This paid off as she was soon given more chances to practise making coffee at work. Her colleagues could see her determination and started to accommodate her. Betty, being a designer, naturally began to fixate on latte art and prioritised artistic perfection as a way to motivate herself to keep on practising.

With opportunities still limited, Betty moved on and landed a role as a head barista at another cafe. Here, she was faced with the opposite scenario. The owner saw her ability and trusted her to run the machine. That meant in the entire year and a half she spent there, she was the only person who could pull shots and steam milk, despite having part-time staff on the team. This sent Betty into burnout, and eventually, the owner relented and agreed to train the part-timers. It was an excellent chance for Betty as she enjoys sharing her coffee knowledge with friends and colleagues. However, she felt that it was time to move on as there seemed to be little room for personal growth.

Before her next role, Betty spent a week at another local cafe, Brawn & Brains Coffee, where she credits one of the owners for a big part in her skill set – perfecting her milk-steaming technique. She praised the owner for her determination in building up the business from scratch, as well as the strict discipline when it came to training. Betty reveals that she enjoys working under pressure and would not appreciate the lack of a challenge in a more flexible and loose environment.

At this point, Betty harboured dreams of opening up her own cafe. She deliberately sought an administrative role for her next job. This led her to one of Singapore’s pioneer specialty coffee establishments Chye Seng Huat Hardware, where she landed as an admin staff member around 2017. She worked from an office on the second level of the former hardware store that has been repurposed into a coffee establishment. It was admittedly a tough job, but it came with great perks. Every morning, there would be a cupping session at the coffee bar downstairs, and Betty always went to work an hour earlier just to join the session. Not long after, she caught on and became familiar with identifying the various flavour profiles.

When the cafe eventually required manpower, Betty took the chance to jump in and join the events crew to help out where she could. She progressed to the coffee bar at the main cafe, where she became familiar with the flow of operations and talking to the customers seated around the counter. It has always been her approach to put herself in the customer’s shoes when presenting the coffee experience. Having made quick progress in the company of skilled baristas, Betty eventually left the admin role to focus on coffee. Soon, the management began to identify her unique skill set of being knowledgeable at coffee while excelling in interacting with people. They offered her a role in the onsite retail store, where she could share coffee beans and machines with the customers. She quickly grew into the role and became part of the team that helmed the cafe’s expansion to its second outlet in the city. 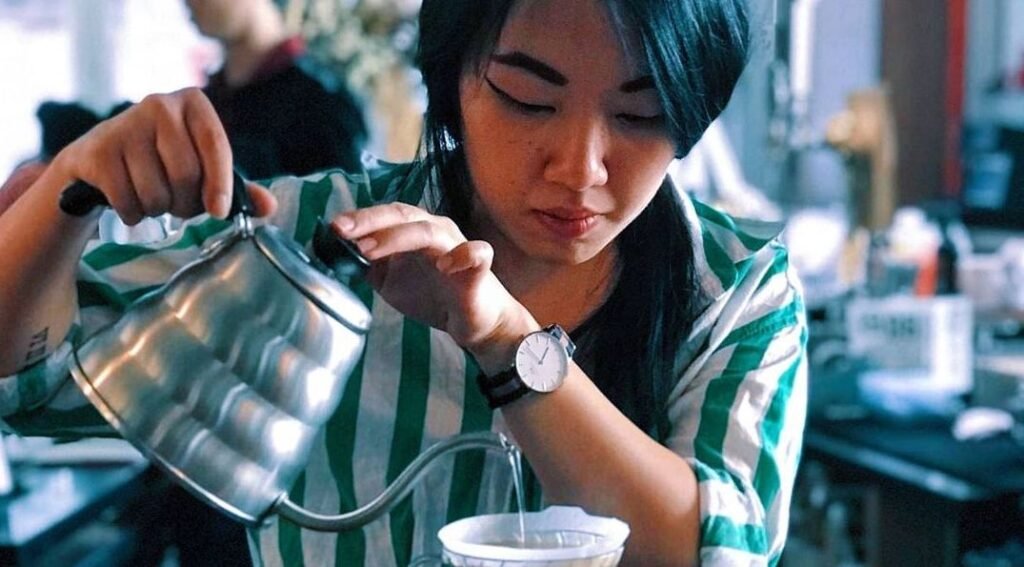 Betty had just converted from a full-time role to a part-time position as she wanted more time to work on her coffee project. She had begun to do a coffee sharing project on the side, where a few coffee friends would share coffees they’ve just got their hands on. Betty also began sharing her brewing process with her followers on Instagram. Then reality hit when the pandemic came, just after she had switched to the part-time position. 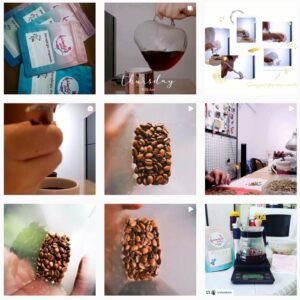 This sent her spiralling as she struggled to come to terms with the sequence of events and her decisions that might have cost her income and opportunity. While stuck at home in lockdown, she eventually came up with ways to move forward. She thought about others who were at home and imagined what they would do. Indeed, they would be looking for something to work on, too, as she did. She started making tutorial videos and teaching people how to make coffee from scratch, experimenting with formats like IGTV and IG stories. This rolled on as the things she shared connected her to people who became interested in collaborating with her. People began asking her for tips and expressed that they liked her content. Betty was enjoying all these interactions and engagement.

Along the way, she happened to get into a community group chat and was introduced to Compound Coffee which offered free online classes on roasting beans. She thought it would be worth a try and started to learn about roasting theory and science. When the lockdown was over, and places reopened once more, she began to practice roasting onsite. The people at Compound Coffee were incredibly generous and even provided green beans for her to practice. The space, helmed by Ken, is a co-roasting space where Betty often goes now to roast her coffee in small batches.

With her own brand, Betty can apply both her design skills and coffee knowledge. She wants her customers to enjoy coffee just like she does. After the past six years making her way in coffee, Betty feels she is now ready to push herself further and fulfil that early vision of her own coffee business – with a new twist. Having had the chance to create her brand and express herself through design and coffee, her goal of opening a cafe one day has now shifted to a coffee studio concept with an art gallery spin to it.

Betty recounts that it has been a few long years, but all entirely worth it. She wouldn’t be who she is, were it not for this journey. And she would have been more naive if it weren’t for all those experiences she has been through.

These days, the moment she wakes up, she heads right for that first cup of coffee. She instinctively whips out her phone to take photographs and videos to upload later or starts a live stream. Now she’s working on her drop bag brewing guide, where she insists on giving each design a personal touch before sending them out. It’s fun, something she likes and loves to do. More importantly, she’s learning every step of the way. As someone who admits to getting bored quickly, she finds that coffee is that one thing that allows her to learn more every day.

If you’re keen to follow Betty’s journey, check out her work here. Subscribe us for more coffee story.