The first time André Eiermann had his first cup of coffee was during the interview for a Junior Coffee Trader position. After the interview, André was convinced that coffee was his destiny. On the hunt for an adventure, he was especially interested in traveling to the various origins of coffee. This is how his adventure unfolded.

Back in 1999, André Eiermann applied for the role of a Junior Coffee Trader at Volcafe in Switzerland—one of the biggest green coffee trading houses. He had his very first cup of coffee during the interview and needless to say, he didn’t like it very much. However, he knew it wouldn’t be his last cup. After the interview process, having learned about coffee and its origin, he was eager to experience a great adventure by exploring the various origins of coffee.

Shortly after landing the job as a coffee trader, he was afforded the opportunity to live and work for Volcafe in Kenya and Tanzania. He spent most of his time on coffee farms, in dry mills, and in cupping rooms where he sometimes cupped 800 cups of coffee a day.

The time André Eiermann spent at the origin level of coffee is one of the most memorable experiences of his coffee journey. When he arrived in Nairobi, Kenya, he visited his first coffee plantation, and “it was magical to see a coffee tree at origin”.

He realized that without the tremendous hard work he witnessed and learned about at origin, consumers would not be able to enjoy coffee the way they do today.

After his time at coffee’s origin, he worked in marketing for several coffee roasters across Europe. Over the course of those years, he gained a deep understanding of the coffee industry—from whole coffee beans to roasted and ground coffee, all the way to the instant and ready-to-drink category. André’s thirst for knowledge and his intense cupping sessions led him to try out for his first local Cup Tasting Competition. He won the event, and his success propelled him into the coffee competition scene. In 2017, André won the Swiss Barista Championship and then started preparing for the World Barista Championship (WBC). In that same year, he remembers having his first really good cup of coffee in a little café called 27 Coffee Roasters in Fujisawa, Japan. André ordered an espresso flight—a split-shot between an espresso and a cappuccino. He took his first sip of the espresso he was served and he sat back, paused, and was quiet for a while. He knew, then and there, that that was the coffee he wanted to use for the WBC. He recalls the flavors and expresses that:

“It tasted like yellow peach, cherry blossom, plum, honey sweetness with a long-lasting lingering finish and notes of champagne.”

Two months later, he flew to Honduras where he met with Marysabel and her husband, Moises, on their farm Finca El Puente to choose his championship lot. With the most elegant espresso he’s ever had in his life, he managed to reach the semifinals of the WBC in Seoul, South Korea. 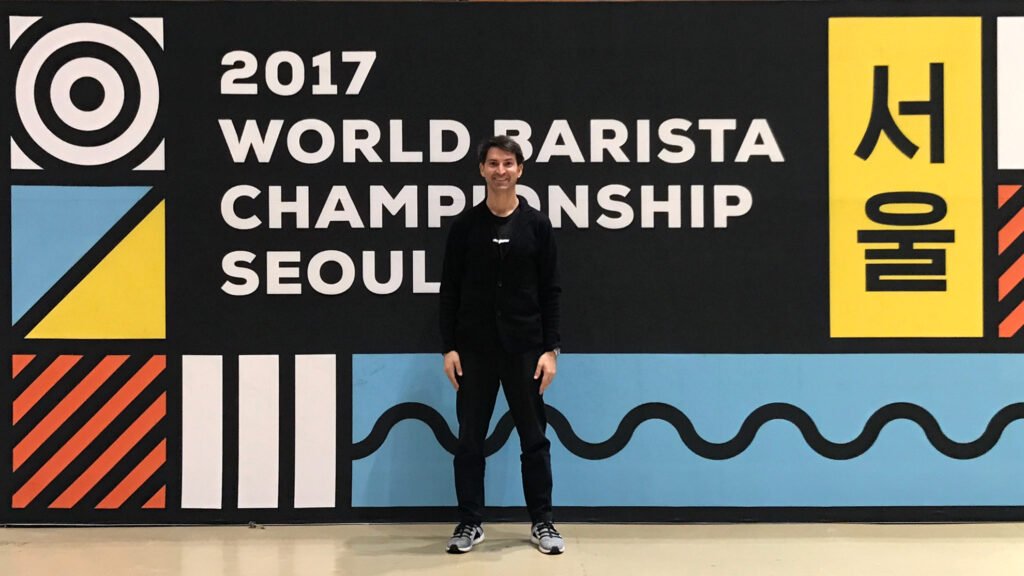 In Seoul, André experienced one of the most significant achievements of his career. He took an IKAWA Coffee Roaster on stage during his WBC performance and became the first barista to roast coffee live on stage in front of sensory judges.

Another achievement he is proud of is the opportunity he was given to submit his scientific coffee research results before 200 coffee scientists. He was able to present his concept around “Ultimate Freshness” and his innovation called the “Nitrogen-Flush Extraction”.

“It took me five months to prepare for this routine and I extracted 23,000 espresso shots during that time.”

As arduous as extracting 23,000 espresso shots may sound, André finds that his favorite part of his daily work is scientific research on coffee. He enjoys paying special attention to espresso extraction which he believes is a “highly complex field”. He is certain that the future of coffee will be driven by research-based innovations.

André has worked in both the commercial coffee industry as well as the specialty coffee industry. He finds them both equally interesting and he indicates that he has learned so much from both industries. At first glance, the products may look the same, but he finds that there is a huge gap between specialty and commercial coffee. André’s firm conviction is that both sides can learn from each other.

With so many years under his belt in the coffee industry, André is sure to have had ups and downs along the way. He recounts that one of the biggest challenges he faced was the lack of inclusivity, especially in the competition scene. He says,

“The hurdles to compete can be very high, especially for independent baristas without a powerful company behind them”.

Despite the hurdles and challenges that baristas face in coffee competitions, the industry is exceptionally diverse and opens up multiple opportunities to meet with many amazing, inspiring, and generous people. André acknowledges how fortunate he has been to have met people all along his coffee journey who have guided and motivated him. Apart from these influential people, what has kept him working with coffee is the freedom he was afforded to research coffee origins, the cultivation, the processing which led to then learning about the roasting aspect of coffee and in the end, how to prepare it. He believes that there are so many facets when it comes to coffee that each and every field along the entire value chain is another rabbit hole one can get lost in. André suspects that if you’re someone who likes learning new things, then the coffee industry may just be for you—there’s always something new to learn.

“I believe the coffee industry offers near endless opportunities for anyone to grow.”

André has definitely grabbed each and every opportunity he could, but that’s not what success looks like to him. Success for him is to see others grow and have the ability to help them achieve their dreams. He humbly says,

He calls to mind the greatest moment of his coffee career: the celebration of the final day of their Youth Academy with 16 students who gained and shared knowledge with each other. To this day, this group of coffee lovers is still connected and they continue to strive for excellence in the coffee industry. These are the kinds of people that André is inspired and fascinated by—young coffee professionals who are highly motivated, with a great thirst for knowledge, who are driven by passion and governed by discipline to make their dreams come true. André is always keen to meet coffee professionals from around the world and in different fields as he says it’s fantastic to be able to share knowledge and learn from each other. He goes on to say, “Coffee tastes better when you can share the cup”.

A true lover of nature, André used to be an ultra-trail runner before his deep dive into the world of coffee. His first race was a 24-hour run in France. Thereafter, he raced the Ultra-Trail Mt. Fuji in Japan, the Zugspitze Ultra-Trail in Austria, and the Eigertrail in Switzerland. 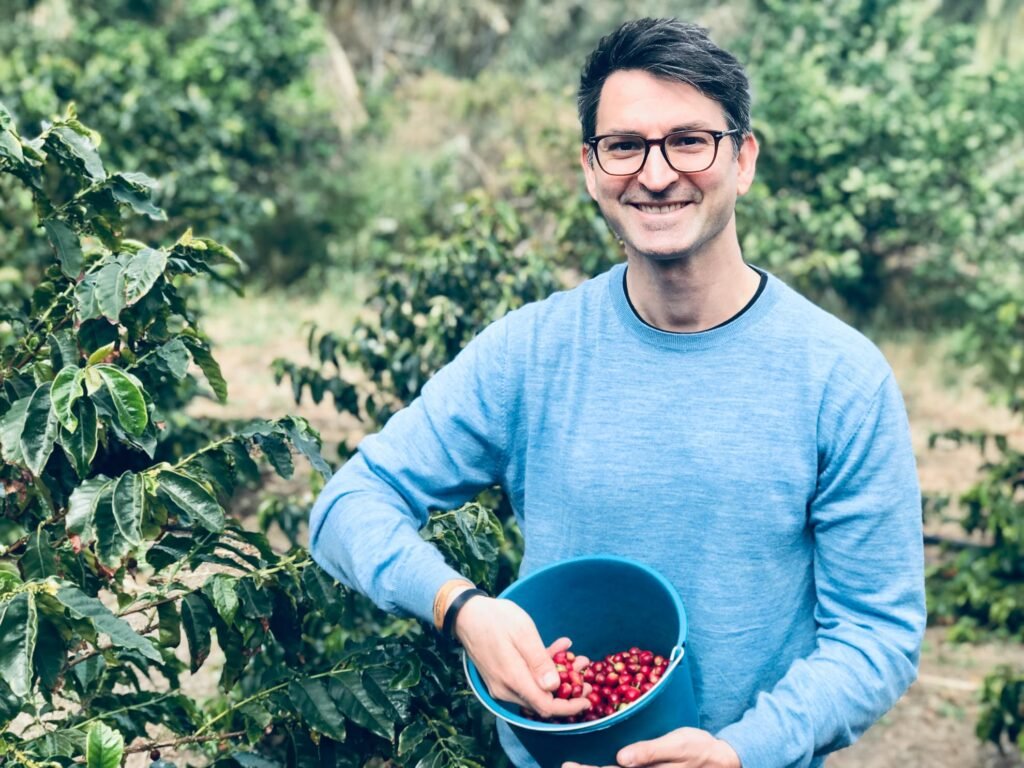 It’s amazing to see how far André has come. When he started, coffee was just coffee—something he never even tried before. In the last few years, he has founded the UCC Coffee Switzerland Academy and even launched his own specialty coffee range. He’s able to say that he has competed (and judged) in barista competitions as well as collaborated with Zurich University on a research project on the variables that govern coffee extraction from single-serve coffee capsules. Not only is André listed as the first author of the abovementioned scientific publication, but he has also recently published his own book, Inspire and Get Inspired, which details his journey from a marketing director to the World Barista Championship. Furthermore, he is a certified Arabica Q-Grader and Authorized SCA Trainer. André has since moved to Melbourne, Australia where he is the General Manager at Victoria Arduino.

Driven by curiosity, André is looking forward to learning from those in the Australian coffee community as well as sharing his knowledge and growing together. He aims to push the boundaries of sustainability along the entire coffee value chain to help further democratize specialty coffee. While he understands that the coffee industry is a business, he highlights the importance of finding the balance between the people, the planet, and profit. Above all, André maintains that

“Coffee is magical—it connects people with a passion who strive for excellence”.