It’s hard to believe that for Vivito Yeptho, Co-founder and Managing Director of Nagaland Coffee, coffee used to be nothing more than a black beverage with a swirl of milk. The out-of-the-box thinker endeavored to bring change to India, where tea is the predominant beverage. This is Vivito’s journey through coffee. 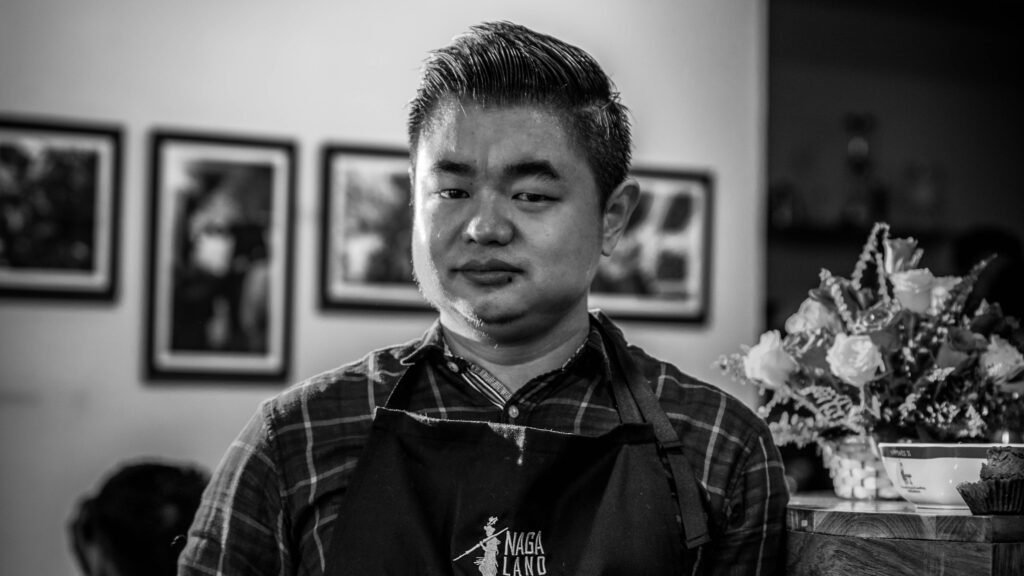 Vivito’s journey began back in 2017 when he met Dr. Pieter Vermeulen, a coffee specialist all the way from South Africa. Dr. Vermeulen visited Nagaland, India, and found that the coffee grown there has the potential to rival the best coffees in the world. It was he who encouraged Vivito to explore what the coffee business industry had to offer. Before meeting with Dr. Vermeulen, the thought never crossed his mind. Later, Dr. Vermeulen became his mentor and taught him about the intricate details of the anatomy and physiology of coffee. This formed a strong and solid foundation from which they birthed and preserved a coffee culture in Nagaland.

He remembers that back in his day, the only appropriate professions were considered to be those in the medical field, engineering field, or the government public sector. Arguably, this shaped his answer to the question we’ve all been asked at least once in our lives: “What do you want to be when you grow up?” His answer to the ever-looming question was a doctor. Vivito grew up believing that this is what he truly wanted for himself. However, after two years in medical school, he couldn’t foresee going any further. Finally, he gave up and he laments that that was undeniably one of the darkest moments in his life. During this time, his family became a source of light and helped him see that being a doctor isn’t the only profession in life. As a man of religion, he put his trust in God because the real test of faith is when you don’t know the outcome but believe that He does.

Beyond the medical field, Vivito searched for opportunities and he ended up studying Business Administration in Bangalore and even went on to obtain his Master’s in International Marketing at Cardiff University in the UK. His sudden interest in the coffee industry linked with the subjects he had studied at Cardiff University. And as they say, one thing led to another.

Today, Nagaland Coffee is managed by Dr. Vermeulen, Kajiikho Arücho, and Vivito Yeptho. From crop to cup, their coffee is grown, processed, harvested, and roasted in the state of Nagaland by their hardworking Naga people. Vivito proudly says that they have worked and will continue to work hard to put Nagaland coffee on the specialty coffee map. He goes on to say,

“It’s our opinion that the coffee grown in Nagaland is on par with some of the top specialty coffees around the world.”

During the initial stages of his coffee venture, there were many hurdles and challenges that made him ponder whether this was actually the right move for him. Again, it was his family as well as close friends that kept him grounded, supported him, and offered guidance which helped him through various obstacles over the course of his journey. Vivito also tells us that there is one verse from the Bible that has been the backbone throughout his coffee journey – “I can do all things through Christ who strengthens me” (Philippians 4:13).

One of the very first challenges Nagaland Coffee faced was educating people on how to brew filter coffee. In India – and especially in Nagaland – tea has been the dominant beverage for many years, and when it came to coffee, it was always instant coffee. Unlike instant coffee, where the coffee granules dissolve in hot water, filter coffee goes through a very different process – unfamiliar to primarily tea and instant coffee drinkers. Together, they brainstormed and devised a plan. They knew that every household had a basic tea strainer and so instead of getting people to purchase the necessary equipment to brew filter coffee, they ground their coffee coarser in order to match the everyday tea strainer. In addition to this brilliant idea, they prepared simple, easy-to-follow instructions on all their coffee packs. This is what really helped their customers brew coffee the right way.

While the tea strainer was a great push forward, there is certain home brewing equipment required to produce the desired flavor profile in a cup. The French press and pour-over are the two most common ways to brew coffee in Nagaland. The equipment, however, was not easily procured. In order to get ahead of this setback, they teamed up with Bialetti and Melitta who agreed to supply their coffee shop and online store with the necessary equipment.

Another hurdle they faced was the limited resources and manpower available. With this, they struggled to meet the requirements set by the Specialty Coffee Association (SCA) when it came to exporting green coffee to other countries. 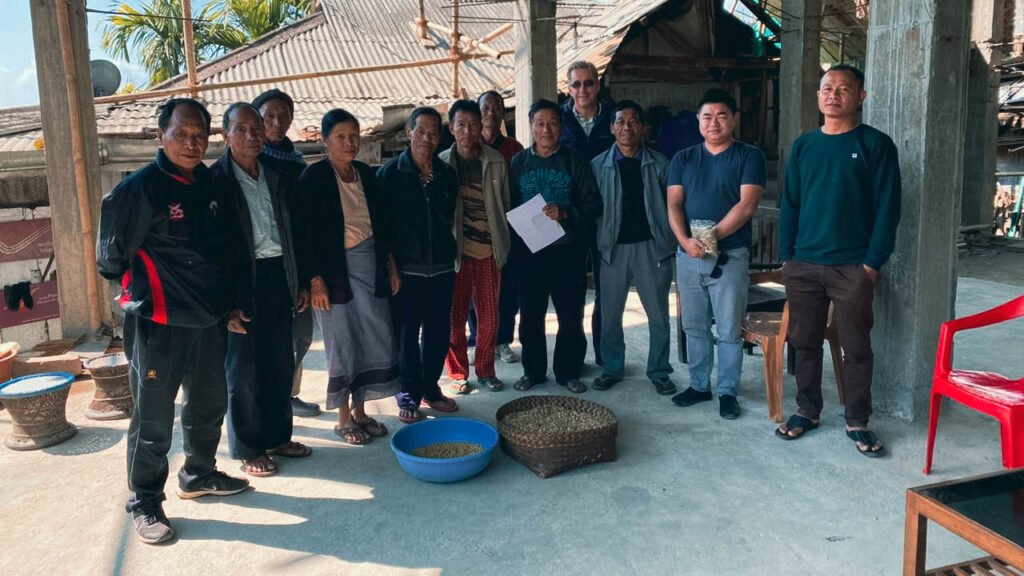 “Thankfully,” Vivito states, “the Department of Land Resources made an agreement with the farmers to supply all the necessary resources and manpower which helped us to improve the coffee quality in Nagaland and finally meet the demands and standards of the SCA.”

Managing Director, Vivito, encountered a number of stumbling blocks along his journey and so we had to ask him what kept him working with coffee. He simply answered, “Life would be dull if there were no challenges”. He stresses the importance of keeping up to date on what’s happening around the world within the coffee industry and keeping your eyes peeled for opportunities. Furthermore, he says, “to be the best, you have to give your best”. Nagaland Coffee has received many awards which just goes to show the hard work and effort they put into their coffee business. Vivito mentions three of the most memorable awards: their Mon Single Origin Coffee won the Fine Cup Award at The Flavor of India, their coffee shop was given the Vocational Service Excellence Award, and their Tribal Blend Roasted Coffee won the Silver Award.

Every day, he is unequivocally inspired by his team with the amount of effort and commitment they put into their work. He is constantly motivated to work even harder and set an example as a leader.

Vivito’s definition of success is seeing customers savoring their coffee, captivated by its taste and delighted with its aroma, while appreciating the hard labor behind every sip. To this day, he is enthralled with the roasting process – the transformation from a tasteless green bean to a flavorful roasted bean “is just astonishing to watch.” He admits that there have been a few times where he himself enjoyed a really good cup of coffee. One of them was at a local café in Safdarjung Enclave, Delhi, where he relished the best Americano he’s ever had.

As the co-founder, Vivito, has made such an impact in the specialty coffee industry in India, but who is he outside of coffee? He is a family man who considers his family his top priority in his life. Even when swamped with work, he sets aside time at least once a week to spend quality time with his wife and son. With anything jazzy or bluesy playing in the background, he enjoys reading Every Day A Friday by Joel Osteen.

Throughout Vivito’s coffee journey, he feels extremely blessed to have had the opportunity to learn and build relationships with many educated and accomplished people from all over the world. We are positively inspired by his resilience, diligence, and commitment to not only his work but also his family. We’ll leave you with one last piece of advice he offered: “Those who work hard; win the race.”

Fabienne Braun was fortunate enough to get acquainted with coffee culture from all around the world. At the age of fifteen, she took on an apprenticeship as an optician and…
Emma Niro
Coffee Stories
14th September 2022

From Tragedy to Triumph:  Apoorv Agarwal’s Story About How a Single Cup of Coffee Changed His Life   If there was ever a poster child for the old proverb, “If…
Kenyatta Fishoe
Coffee Stories
12th September 2022

Kerem Helvacıoglu: half human and half coffee. One of our Coffee Wristbands’ designers, Nükhet Çubukçular, chose Kerem as one of the recipients of the profits from her design. This is…
Nathierah Fredericks

This website uses cookies to improve your experience while you navigate through the website. Out of these, the cookies that are categorized as necessary are stored on your browser as they are essential for the working of basic functionalities of the website. We also use third-party cookies that help us analyze and understand how you use this website. These cookies will be stored in your browser only with your consent. You also have the option to opt-out of these cookies. But opting out of some of these cookies may affect your browsing experience.
Necessary Always Enabled
Necessary cookies are absolutely essential for the website to function properly. These cookies ensure basic functionalities and security features of the website, anonymously.
Functional
Functional cookies help to perform certain functionalities like sharing the content of the website on social media platforms, collect feedbacks, and other third-party features.
Performance
Performance cookies are used to understand and analyze the key performance indexes of the website which helps in delivering a better user experience for the visitors.
Analytics
Analytical cookies are used to understand how visitors interact with the website. These cookies help provide information on metrics the number of visitors, bounce rate, traffic source, etc.
Advertisement
Advertisement cookies are used to provide visitors with relevant ads and marketing campaigns. These cookies track visitors across websites and collect information to provide customized ads.
Others
Other uncategorized cookies are those that are being analyzed and have not been classified into a category as yet.
SAVE & ACCEPT
X