Kerem Helvacıoglu: half human and half coffee. One of our Coffee Wristbands’ designers, Nükhet Çubukçular, chose Kerem as one of the recipients of the profits from her design. This is Kerem Helvacıoglu’s story.

Kerem’s story begins with his grandmother, who he’s always admired as she worked behind the kitchen counter. He was a student of mechanical engineering, but all he could think about was traveling the world and learning about different cultures. This is when gastronomy piqued his interest.

After 3 years of hitchhiking and engaging with new cultures, he was determined to learn more about gastronomy. As a means to fund his travels, he dabbled in part-time jobs and thereafter changed his course from mechanical engineering to bioengineering. Kerem informs us that bioengineering is a multidisciplinary area that includes medical technology and devices; studies on drugs and vaccines; various bioprocesses like the fermentation of coffee, wine, and beer; cultivating plant and animal tissues; as well as studies on genetics.

In 2019, he was introduced to someone who wanted to open a coffee shop in Izmir. It was the first time that Kerem heard about specialty coffee. Together, they opened the coffee shop and Kerem worked as a specialty coffee barista. He was simply elated working behind the bar, preparing various drinks because it reminded him of working in a lab. While working as a barista, he continued his academic career in bioengineering.

“It was maybe the most tiring period of my life.”

Kerem would wake up at 6 AM, take the bus and make his way to university. He’d leave campus at around 4 PM and then hurry to the coffee shop. Kerem would work right up until closing time then go home to sleep and the next day, he’d do it all over again.

Unfortunately, when the pandemic reared its head, Kerem had to return to his hometown. As a result of the pandemic, he lost all his part-time jobs and became anxious when he considered his future. For Turkey’s first summer, he decided to take a break in Antalya where he was contacted by his university and informed that they will be administering classes online for that semester. Kerem then decided to remain in Antalya and moved in with friends. During the pandemic, he read a lot about specialty coffee. While living in Antalya, he looked up the specialty coffee scene and found Incommon Coffee Roasters that was only a 5-minute walk from his home. There, Kerem met Caleb Ismet Bilgen and Trent Rollings. Kerem spent a lot of time at Incommon and became a loyal customer. A short while later, Trent offered him a job as a barista which he immediately accepted. While working at Incommon, he practiced for the National Brewers Cup. Kerem feels entirely indebted to Trent because

“He changed my coffee and life perception totally. I’m so grateful to know him.”

It was Trent who advised him to integrate his studies into the specialty coffee industry and as a result, Kerem found the missing piece in his career goal puzzle. While Kerem worked at Incommon, he met with many great people but there’s one in particular that stands out – Nükhet. Kerem considers Nükhet a great friend, designer, and coffee enthusiast.

“[Nükhet’s] mindset is so unique and generous.”

The two met online and talked endlessly about coffee. When they met, he remembers going through a really difficult period in his life. Firestorms ravaged the city and the forests. The pandemic continued with no end in sight and his personal relationships suffered. Kerem went through a bout of depression and Nükhet was one of the people who helped him through it, giving him advice.

A few months later, due to the financial impact caused by the pandemic, Kerem was retrenched from his job as a barista at Incommon. He remembers a very emotional farewell, as they hugged and cried and bid each other goodbye. Kerem packed up and moved back to Izmir with only one goal in mind – graduation. He applied himself in his studies, writing his thesis, and going to lecture after lecture but

“I missed the coffee community so much”. 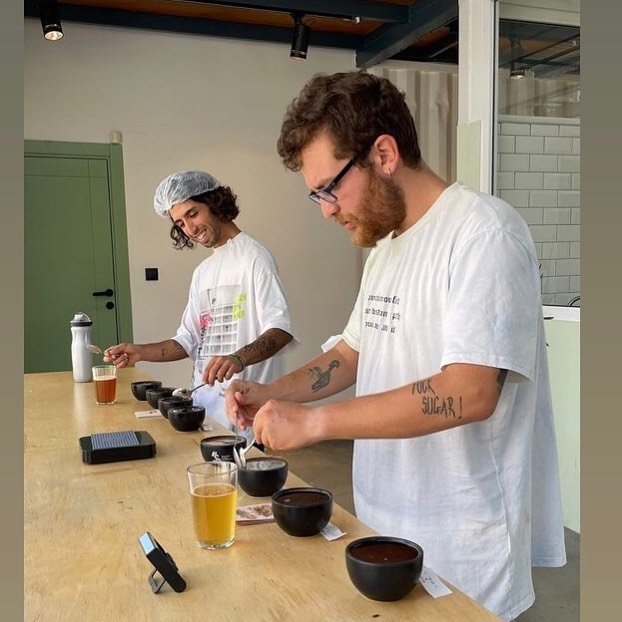 During this time, Kerem missed out on sensory practices and in about 7 or 8 months, he wasn’t able to do a proper cupping to produce a good cup of coffee. Trent remained a good friend to him and helped him through this period and said:

“Be humble and trust your senses.”

Kerem then passed the sensory test for the National Barista Championship and The Brewers Cup. During the competition week, he met so many influential people and he feels so grateful to have had the opportunity to meet them. After the competition was when Kerem met Nükhet in the flesh and she started to become his “mentor”. He decided to take part in the Aeropress Championship and Nükhet let Kerem use her equipment. Kerem feels especially blessed and lucky to have met Nükhet who has had such a positive influence on his life. Her donation came at exactly the right time, a light at the end of a long tunnel, and a reminder that nothing lasts forever.

He hopes that in the coffee industry, everyone can have the mindset of:

Now, Kerem has scored himself a summer internship with only 2 more lectures to go until graduation. After he graduates, he hopes to remain in the coffee industry for years to come, integrating his studies into the world of coffee. Kerem says,

“My main focus is on plant biotechnology and bioprocesses so that I can make an impact on the specialty coffee industry and improve sustainability across the world”.