I’m not a barista: «Our mission is to help baristas transform the social prejudice»

The original article was published on March 11, 2020, on www.comunicaffe.com

The founder of I’m not a barista: “The idea to start an NPO and help baristas in need emerged in the middle of 2019. At that time, I just quit my job and moved to a new country for my family. I had more time to think about what I wanted to do in life and what values I can deliver to others.” 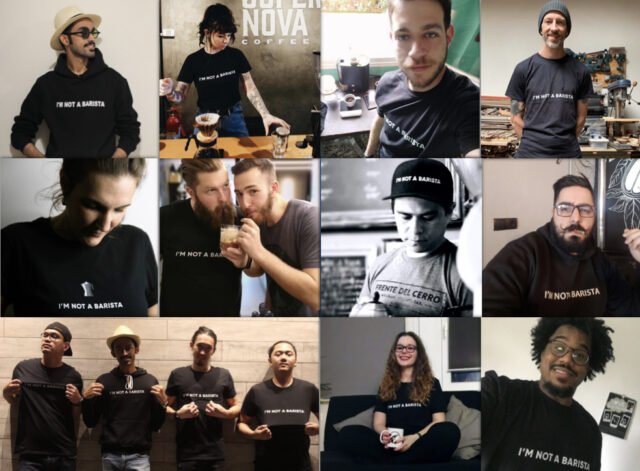 MILAN – We have spoken with the representative of an association I’m not a barista, with the mission to spread a major awareness in the relation of the role of baristas worldwide. Without a physical location, but officially registered in Hong Kong but: the volunteers are working remotely in UK, Russia, Italy, and many other countries. They work together to communicate the importance of this job, which is not only a craft for those who don’t know what to do in their lives, but it’s a serious profession. One that has value and needs the right salary and constant training.

We have known them through an Instagram story from Specialty Pal, who decided to be part of this initiative.

I’m not a barista: what’s about this project

First of all, can you introduce who are you, who is there behind the project

“My name is Micky, and I’m not a barista, seriously, I am not. It’s a long story short, I am just a coffee lover with a special emotional consonance to coffee and the coffee world.

I was born in a big tea country and moved to Scandinavia when I was young, used to be a big Starbucks fan, and now here I am, running a Nonprofit organization to help baristas in need.”

How, when, and where was this idea of I’m not a barista born?

“I worked in the coffee industry as a marketing director in 2018 and often talked to baristas and coffee professionals. Then I sometimes received sponsorship requests from very talented baristas, but couldn’t help them due to the budget restriction. I felt bad that I couldn’t help them, I wished one day I could do something for those baristas in need.

The idea to start an NPO and help baristas in need emerged in the middle of 2019. At that time, I just quit my job and moved to a new country for my family. I had more time to think about what I wanted to do in life and what values I can deliver to others.

Everything was flowing around in the air until the end of 2019, I just finished the website and surprisingly received the 1st order from a big coffee lover from Dubai UAE. This transformed the fluffy idea into a real plan, it has been 3 months now and I’m super happy to share our mission with 2K followers on Instagram.

Can you explain the origin of the name “I’m not a barista”?

“I am that kind of person really into irony, and I often imagined this ironic picture of a barista making coffee with this T-shirt with big I’m not a barista tag line, or a barista contender wins a championship with this T-shirt and shares the meaning of the T-shirt. The irony from the T-shirt could trigger curiosity, which may also lead to a conversation between baristas and the others. I believe this is the best icebreaker for an easy conversation. In the coffee world, we need more communications, baristas are the one who protects the value of hardworking of coffee producers and coffee roasters, people deserve to know more about the real coffee.”

In Italy, the barista is a figure that often is considered a simple job (anyone could prepare a coffee): is it the same abroad? Or something changes?

“After talking to countless baristas and coffee professionals, I think it is true that our society often perceives baristas as an unskilled, temporary job for college students, and people “without a real job”.

I think in Europe and the US, baristas are treated a bit better in comparison with baristas in developing countries. It is very hard to change people’s perception and mindset without breaking their repeated patterns. If we say ” Italy is famous for espresso coffee.”, you won’t find nothing wrong with that, the main point is espresso coffee, baristas are not mentioned. It is like “Germany is famous for its luxury cars”, we don’t think about the workers in the factories who make the cards, but car brands such as Benz.

If we say “It is a good piece of Artwork”, we not only think about the Art itself but also Artists who created the art work, this is very different from the examples above. I often think baristas are more than people who make coffee behind the bar. Making coffee is simple, but being a great barista is an Art too, you need to master in balancing the social needs and coffee science. A barista is beyond a person who makes coffee (saddle this is what society often think of barista), baristas shouldn’t let this limit what they love and what they do.

What is your mission?

“Our mission is to help baristas in need and transform the social prejudice about baristas.”

How can you join this community?

“If you meant how people can join the I’m not a barista community? It is easy, you need to love coffee and are willing to share your coffee story with us. No champ title required, no Sca certificate required.”

With I’m not a barista, you sell also accessories: how does it work exactly?

“We sell branded apparel like T-shirts and hoodies that we can print our message on, the ironic “I’m not a barista” tag line – best icebreaker for a conversation.

The profit from each item we sell on our webshop will be used to helping baristas in need through a small donation to the community. For example, last month we successfully donated 100€ to the Greek barista Tzanetos. 100€ is not a big amount of money for a championship contender, but the meaning behind this 100€ means a lot. For example, we received a 26€ donation from barista Siew from Singapore, and the rest money was from T-shirts sold to Germany, Russia, Singapore, and Mexico. To Tzanetos, in addition to his family and friends, there are hundreds of coffee friends supporting him, because coffee connects us all.

How do you think to improve this figure worldwide?

“We need more help from bigger influencers in the coffee world, like baristas champions, bloggers, YouTubers, and other NPO/NGO who dedicate to similar missions. But most importantly, we need more regular coffee lovers and baristas to join our community to share their stories with their friends. Your friends won’t care much about who won the last year’s Coffee master, but they definitely pay attention to what you do next month.

If small coffee stories can reach 3 of the 6 degrees of separation, sharing specialty coffee knowledge and transforming barista social image will be less difficult, and when dealing with the more important problem such as the coffee shortage in the future, maybe more people will feel a sense of responsibility, and together we can change something.

We’ re living in a world bombarded by negative with shocking news every day, people get used to this and feel numb. But I believe in the power of storytelling, still can awaken the humanity of doing good within us. While we enjoy a great cup of coffee, we can also show our appreciation to whom work very hard for this cup of coffee, not only to baristas but also coffee roasters, traders, and coffee farmers.

There are numerous coffee media featuring emerged famous baristas and their stories, you can find many inspiring articles online easily. I think to most baristas, it is great to read those stories and get inspired and motivated, but after a long day at work, those connection seems a bit distanced, I think baristas prefer other stories that happened around them, in their communities where more emotional connection exist.

To enhance this connection between coffee lovers

I encourage people to be open to new friends from their neighborhood or other countries. For example, when you are traveling in Singapore, when you need some great coffee, you know where to go if you are in this global community, people working there maybe not superstars with champion titles, but they are real people and friends you can say “hi” and share a good cup of coffee. Coffee really connects in this case.”

With the fully automatic espresso machines, the barista will be still useful?

“I’m not a tech geek, I can’t predict how technologies will change the coffee industry, but according to my limited knowledge, I believe that automation with smart technologies together can have a great impact in terms of efficiency and convenience, but something will be always missing, that is the human interaction.

If you’ve watched the movie The Passengers, Simon Pegg played the role of a robot barista/bartender Author, I think today’s technology is still far from that level, maybe in 20 years it will become reality, but without this human connection, many believe that coffee is just a drink from another plant.”

Future programs of I’m not a barista?

“Currently have many thoughts about the future, but nothing solid yet. We’re still very new to the coffee world, but I am pretty sure that, whatever we do, it won’t be far from our vision – make coffee connects the world.”

I’M NOT A BARISTA’s much-anticipated MOMENTEM Grinder is launching on August 1st, 2022.

A Sneak Preview at MOMENTEM: A Dual-Burr Handgrinder by I’M NOT A BARISTA

tip a barista campaign until September 2021

Contact Information Virginia Fanticini Marketing Intern virginia@notabarista.org +39 3662621450     Embargoed for Release until September 2021 #Tip a Barista: a new charity campaign by I’M NOT A BARISTA to…
Notabarista