My name is Ronița Dragomir, and this is my coffee story.

It’s no surprise that Ronița Dragomir has found community in making and sharing great coffee. As a child growing up in Romania, she relished watching her parents enjoy their morning cup. As she grew older she, too, partook in the morning ritual with both fascination and appreciation.

“I remember my mother’s hands, seeing her fingers grab and throw teaspoons of coffee in the bubbling water, the noise this made, and the wonderful smell that lingered in the kitchen,” Ronița recalled. “To this day, this memory is something I think of most fondly when I try to pinpoint exactly what started my love of coffee.”

As the beverage gained popularity in post-communist Romania, the country has been recognised in world competitions, as when Ecaterina Szazs came in 4th during the 2016 World Champions. Ronița still recalls the delicious cup that changed her own perspective on coffee. “I remember my first V60 at the Barista School in Bucharest: a Yirgachefe Peaberry from Taf,” she said. “It blew my mind that such complex flavors could be contained in just one cup, and it kept on changing the more I drank.” 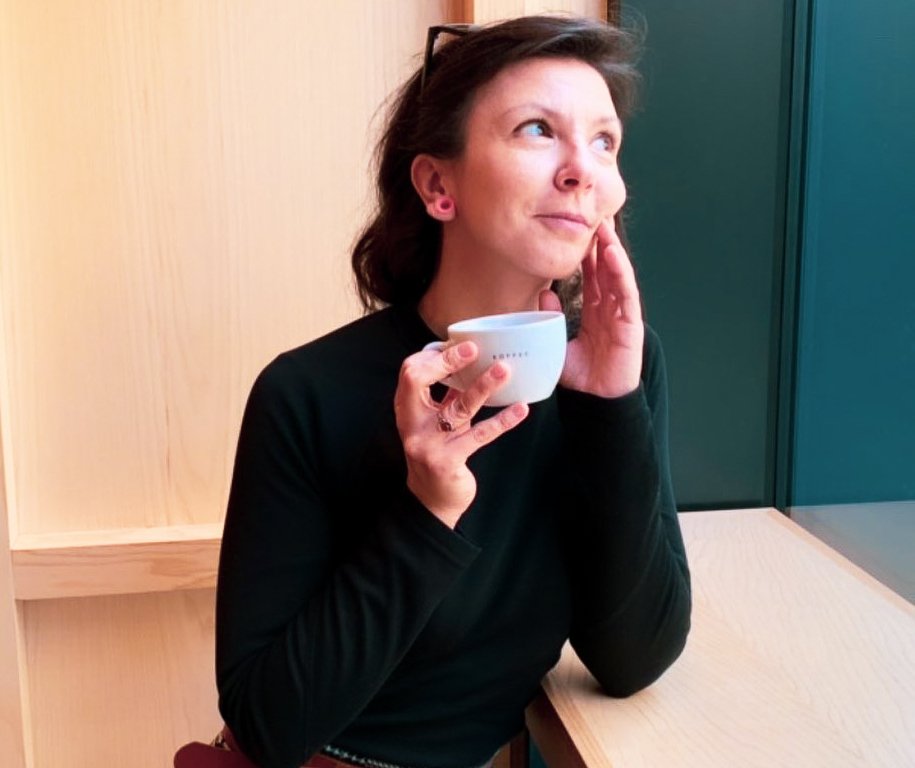 An anaerobic fermentation micro-lot coffee from Panama Gesha, roasted by former World Roasting Champ Alexandru Niculae, also stands out in Ronița’s mind. “The first time I brewed it, it left me speechless,” she said. “It was like a whole tropical fruit bowl had exploded in my mouth. I’ve only ever tasted two more coffees like that since, during a cupping in Amsterdam with Dr. Mauricio Shattah from Finca la Negrita in Colombia—they do incredible experiments with yeast strains and organic acids. Simply amazing coffees!”

As a student of Modern Languages and Literature, Ronița began taking creative writing courses while also exploring new artistic mediums. Writing paved her entry into the world of specialty coffee as she began documenting café life. After interviewing coffee professionals for Coffee Break (www.coffee-break.ro), a specialty coffee magazine, Ronița became a Bucharest-based barista in 2013. She continued to write and, that same year, was named Best Emerging Poet in Romania’s prestigious Literary Debut Competition.

“The most interesting of these efforts was probably a photo and text exhibition I staged in a couple of cities in both Romania and The Netherlands, called “Carte de Bucăți. Rețete pentru femeia perfectă” (A Cookbook. Recipes for Making the Perfect Woman),” Ronița explained. “It consisted of various raw shots of female body parts in association with fruit and vegetables, accompanied by a short poem – the recipe. The idea was to show that it is precisely because of our imperfections that we are unique and beautiful—although we rarely think of ourselves that way.”

Ronița Dragomir with her first book of poems

Seeing her first book of poems published by a major Romanian publishing house confirmed for Ronița that she could combine her love of writing and coffee in new and innovative ways. Today, she is co-editor of Coffee Break, a volunteer editor for I’M NOT A BARISTA, while also serving as Head Barista for 30ml Coffee Roasters at one of their locations in Utrecht, NL.

Adjusting to life in the Netherlands, however, was not always easy. From navigating the language barrier to dealing with feelings of disconnection and loneliness, Ronița confronted the challenges of expat life. “I didn’t know anybody when I first moved here,” Ronița explained. “So even if everyone was nice and helpful, I was still very much an outsider.” Her initial search for work and friends moved haltingly. “Whoever says our cultural backgrounds don’t matter has never lived in a foreign country,” Ronița said.

After taking a string of unrewarding jobs, Ronița realised she needed to make a change. “I was constantly tired, stressed and frustrated because I felt stuck and unable to learn or grow,” Ronița explained. “I did that for nearly a year, then stopped and decided I wouldn’t do it anymore unless it was in a place that could help me reach the next level. I get incredibly anxious and disheartened if I feel like I’m not making progress; I need to learn more, be more and do better! Otherwise what’s the point? If you ask me, money’s the least important thing in life, but unfortunately you do need it to survive and continue improving yourself. It was a difficult road, but in the end I think all the bad experiences have taught me a lot and shaped who I am today.” 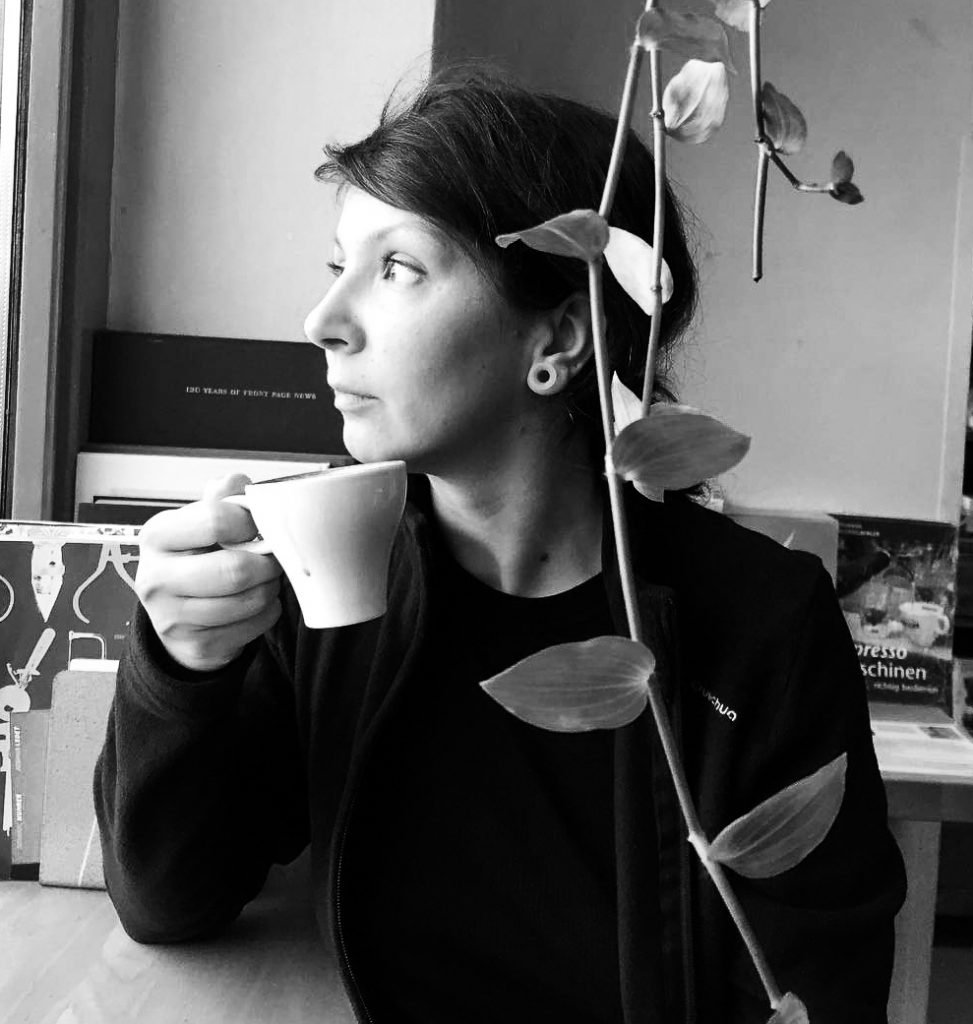 The challenge of this experience, however, allowed Ronița to debunk the common misperception “that you can only be good at one thing so you need to stick to that,” she said. “I had a really hard time choosing which one I loved more—literature or specialty coffee—before I realised there was nobody that was holding me back, except myself.” This realisation kick-started a period of learning and introspection. “I took whatever writing jobs came my way, translated, did copy-writing, but once I had decided I would do whatever it took to get a job working only with specialty coffee things became clearer. I didn’t want to make compromises anymore and if I failed, well, then so be it.”

In 2017, Ronița traveled to Budapest to volunteer at her first World of Coffee event. “I couldn’t believe the scale of it all and the sense of community that was just floating around,” she recalled. “I loved every second of it, especially being in the corner of the stage during the cupping and Cezve championships. It was quite the experience.”

“One thing working in this industry has taught me is that we’re all different and there’s beauty in that,” Ronița continued. “Your passion will guide you as long as you’re willing to put in the work.”

This work ethic further informs Ronița’s definition of success as, simply put, “doing what you love.” She looks forward to a day when she will open her own café, offering respite and great pour-overs to fellow creatives.

Until then, Ronița will continue to pursue her core interests of coffee and literature. “On my days off, I still do a lot of brewing and experimenting with techniques, recipes or cupping some new beans,” she explained. “Apart from that, I love reading and although most of the stuff I read about lately has to do with coffee or coffee pros, I enjoy a good fiction novel. I’m lucky enough to have been asked recently by an aspiring novelist to read her first novel that tackles important issues such as mental health and life as an expat.”

When she’s not pouring great coffee or working on her own writing, Ronița enjoys spending time in nature and disconnecting from all technology for at least one day per week. “Because of my busy lifestyle, I’ve realised I find it hard to unwind and reset,” she explained. “However, I’m also a sucker for binge-watching old 90s TV series with the boyfriend. We’re both huge fans of Monk and Friends. Every now and then we’ll pull an all-dayer and eat piles and piles of vegan junk food. I’m lucky like that.”

Finding balance between her interests keeps Ronița grounded and energised. “I very much value my alone time, and I love starting my mornings in silence with a cup of coffee,” she said. “But at the café I’m always happy to meet new people and make new friends. Whenever you’re in Utrecht, feel free to stop by. I make a mean V60!”