Estella Zuleta is a coffee roaster from Colombia but is better known by her Instagram handle @ladelostintos. Estella began her journey in Colombia in 2016, today Estella lives in the United Arab Emirates. 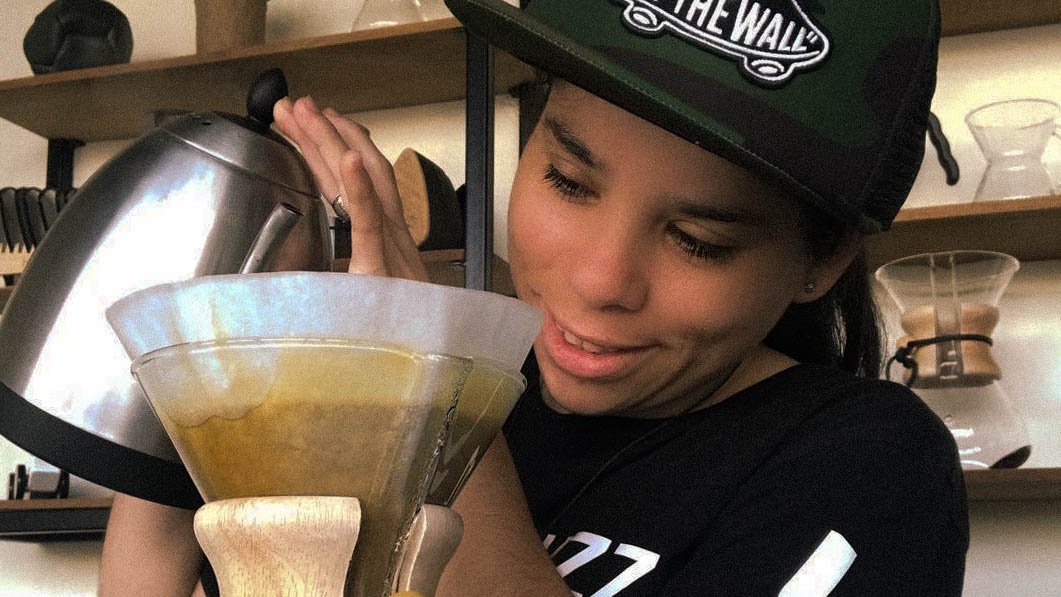 Estella Zuleta decided to take a course at SENA while she was living in her hometown and began “falling in love with coffee.” She began to really enjoy being a part of the coffee community and wanted to further explore the industry and began watching roasters and carefully observing how they do quality analysis and roasted certain samples. Estella then eventually moved to be able to taste their brews, this ignited a spark in her and she fell in love with coffee. After Estella took the course in her hometown she began to look for a barista job in her nearest city.

Estella faced many difficulties when she decided to start her career in coffee. She found getting a job as a barista was particularly difficult, as there were many people who had been in the industry longer than her. She told us it was difficult because “I still lacked knowledge but I was always willing to learn.” Whilst Estella was looking for a place to live, her friends Ginger and Martin helped her when she was struggling and helped her begin her journey. Even when Estella found a job in a coffee shop, she was still having a hard time. “The first months were overwhelming, I tried many coffees’  is what she told us, and she struggled with adjusting to the busy city life. Estella is a very positive person and found many ways, with the help of her friends, to overcome these challenges. She kept studying and training and her friend Mauricio let her practice in the coffee shop and her boss Mafe opened up so many doors for her and she is very grateful for the opportunities they gave her.

“I am a person who likes to share everything I know because knowledge is power, and not all of us have the same possibilities and tools to develop ourselves in coffee scenes”

During the time when Estella was expanding her knowledge, she began to go to many events and fairs. She worked with ‘Tinto’, which is dark coffee without milk and is very popular in Colombia. Someone decided to give Estella the nickname ‘La des Los Tintos’ and this name grew until Estella made her Instagram account using this nickname and began sharing her coffee journey.

Whilst Estella was still living in Colombia, her talent was noticed by a man named Andres, who was living in the United Arab Emirates. He told Estella how he liked what she was doing and proposed she send over some resumes for jobs in the UAE. Even though Estella did not speak English and she felt her chances were low, Andres helped her and she received several replies and a good offer she could not refuse.

When Estella looks back on her story, she always wants to thank all the people who believed in her and that she “was able to study when I saw it as impossible.” Due to the help of those around her and her strong determination, Estella has been able to travel to many countries, going from a head barista to a roaster. Her philosophy is to teach and share what she knows and this makes her feel the happiest she can be.

Estella works hard to help the people in her home country and has travelled back to Colombia twice, sharing knowledge and teaching people in the coffee community, as well as the children of coffee growers. She believed that coffee is not just a drink but an “experience” and unites people around the world, regardless of their differences. The last time Estella returned to Colombia she was impressed with the development of coffee. She went to a farm with “spectacular” coffees grown by Wilton Benitez as well as giving a talk to a class of coffee growers’ children. She then went to the Coffee Growers Committee of Cauca, where she met inspirational young people, who had aspirations of working in the coffee industry, two examples are Juan and Camila. Juan was 20 years old and had a strong determination to be a cup taster and Camila was a coffee grower who has found hope in coffee after a difficult life.

“I feel that I am the reflection of what many people did to me by closing their doors on me, a person open and ready to share”

Estella Zuleta has many hobbies, most notably being her fascination with Ancient Egypt, in which she studies the culture and language of the time. She is mostly introverted and likes travelling, quietly listening to the sea, and taking pictures of sunsets. Her dream is to have her own coffee farm and be able to teach many people about what she is working for.

“It sounds corny, but never give up, fight for your dreams. They told me I was crazy for wanting to make coffee my career but look at me now. Love what you do every day and you will never work”