For Angela K the Beatlemaniac, all you need is love… with plenty of tea and coffee!

Angela is the founder of The Tea Giver Project. She delivers boxes of tea to others so that they can seek soothing comfort in a warm cup and find healing within their day. Since beginning this project in June 2019, Angela has found a greater purpose in supporting people through the pandemic. She’s faced long hours on the frontlines in her job, yet still managed to make time to work on The Tea Giver Project.

Angela’s favorite part of the day is preparing the boxes and bags of tea to be delivered, accompanied by music from The Beatles. As a self-confessed Beatlemaniac and lover of all things Beatles, she especially enjoys Paul McCartney’s work which inspires her to keep reaching out to others via The Tea Giver Project. Prior to this, any known associations between tea and The Beatles have been fleeting, with only McCartney himself once sharing that he enjoys his tea “with soya milk and one sugar” while he also has a 2005 single called ‘English Tea’. Angela sings The Beatles songs as she makes deliveries to the frontline workers and beyond.

One day at work, someone made Angela her first cup of coffee. While she would not usually drink coffee, she decided that she wanted to have a taste and see how it compared to tea. She vividly recounts, as if it were yesterday, how they handed over the cup of coffee and said “try this”. Angela felt so soothed holding a warm cup in her hand. She enjoyed every sip that helped her relax and, at that moment, made her troubles seem so far away. This first sip of coffee turned Angela into a giver of coffee. She wanted to give coffee to others who may have never experienced that first cup of coffee. 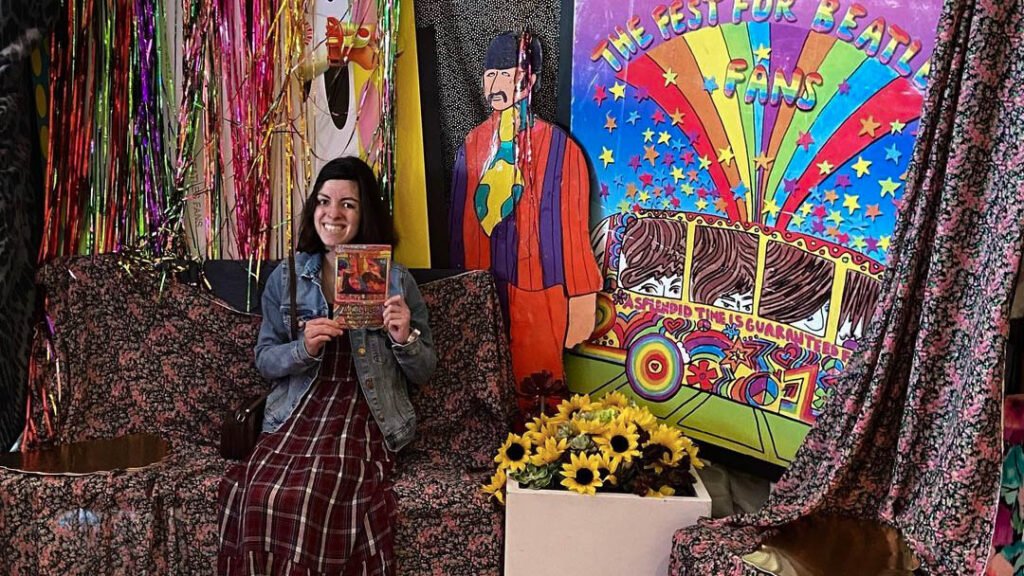 From then on, The Tea Giver Project also gave coffee. Angela believes everyone deserves that first sip and that feeling of warmth in life:

“Coffee is soothing and very healing. It gets you grounded and gives you a moment of peace.”

It’s a good way to take a few moments out of the daily grind.

Angela even carries some sachets of coffee everywhere in case someone is in need of a comforting cup. She shares that it’s been tough to decide what should be on the menu for the coffee she gives. She wants to support thousands of small coffee businesses and purchase one bag from each coffee shop, ensuring each business gets a fair share of support.

Angela loves to come together with those who share a love of coffee. What drew her in was how a simple beverage can bring instant comfort to someone. She is always learning about coffee and integrating creative ways to incorporate coffee into her work. One of her favorite hobbies is card making and she has been making cards since preschool based on people’s interests and themes. She draws coffee themed cards for others which include a little boost of coffee as encouragement.

“You never know when someone will need to feel healed. That’s what I do each and every day I bring that healing to others through the beautiful gift of coffee.”

Her favorite books generally revolve around coffee, tea, or anything spooky. With a penchant for The Beatles, it seems fitting that Angela also loves looking at photographs from past decades, and was introduced to her favorite rock genre by Aerosmith.

Today Angela has given over 20,000 boxes of coffee and tea worldwide. Out of the many places she has sent those gifts to, one that is near and dear to her heart was sending coffee to every Beatles location in Liverpool and London. The Beatles are always incorporated within The Tea Giver Project in one way or another.

Angela sees success as being happy in the work that you do and knowing that others are feeling happy because of what you do. She encourages us not to rest on our laurels and let it be. Instead, set goals and always work hard to achieve them. Angela’s advice would be if you’ve got a dream don’t be afraid to work towards that dream. Life goes on, and we all are capable of accomplishing many beautiful things in life.