Piotr Skoczylas recounts the first time stepping into a specialty coffee shop as an intimidating experience for many people. We do not understand much of what we see on the menu, yet we feel that we should. Sometimes, not knowing more, we simply go along with the barista’s recommendation. Otherwise, we would lean back on something on the menu that we recognise, because that’s a safe bet and we know what we are getting for our money. 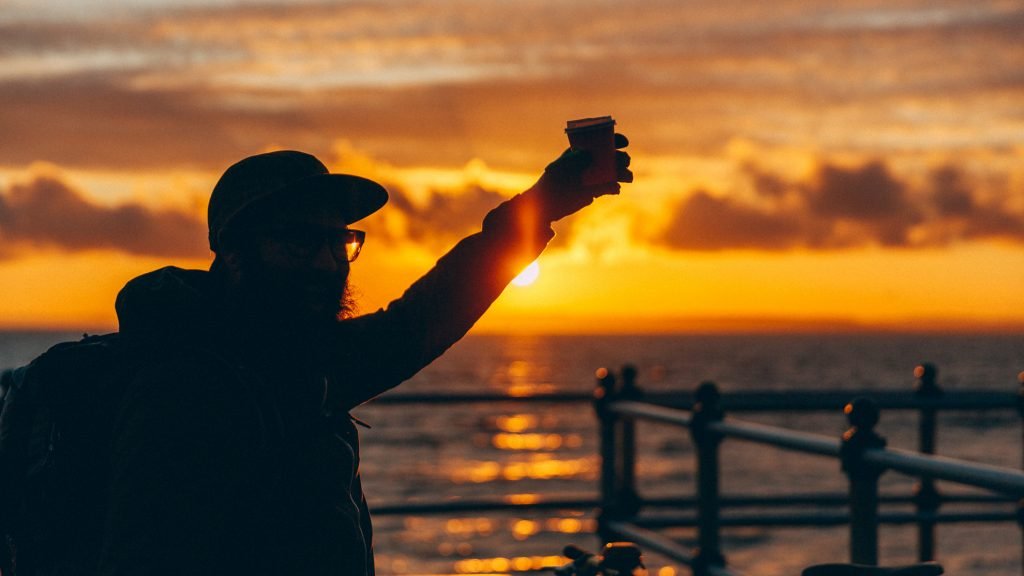 He soon realised that he should be finding ways to communicate better with customers as a barista. Piotr has resorted to various methods – he plays his guitar or uses a nifty voice acting trick to do impersonations – in a bid to make a connection with his customers instead of diving right into coffee jargon. It takes time to build rapport, to convince one to embrace something so new and foreign to them.

When lockdown arrived during the pandemic, the reduced interaction made it even harder to connect. Piotr was driven to find a way for his customers to continue enjoying the social aspect of coffee. At the most fundamental level, he believes that coffee begins with relationships. Piotr’s story is a powerful testament to how forging strong bonds within the community can lead people on a path to change their minds about what coffee could taste like.

At the age of 18, Piotr Skoczylas left his native Poland and landed a part-time job at a coffee shop in Ireland. On a daily staff meal allowance, he regularly consumed sugar-laden mochas that formed his first impressions of coffee. After a while, he decided he would not learn more on the job if he had stayed on, so he switched to a full-time restaurant service role instead. Later on, when he moved to London, he walked into Jamie’s Italian to seek a job and ended up there for the next four years. He credits that stint as an eye-opening experience where he had opportunities to meet and learn from Jamie Oliver himself, which allowed him to appreciate the whole ethos behind the brand. He was also privy to the hard work and passion required to sustain a career in the service industry.

On his days off or after work, Piotr would go into town and explore London’s many coffee shops. At Workshop Coffee, he discovered flat white that he realised tastes good on its own, without all the sugar he was used to adding. All this exploration had allowed him to realise that many processes, especially how coffee was made, were so much better at the coffee shop. He soon “went down the rabbit hole” as he started to read more about coffee while attending some espresso and latte art classes in his own time.

When his family moved from London to Cardiff, Piotr finally decided to join a coffee shop. Here, he witnessed a lovely community congregating around coffee on a daily basis. It did not take long to dawn upon him that coffee is essentially about people. He knew he had to focus on cultivating that social aspect. For a start, he had to transform his mindset towards coffee. He had previously started an Instagram account for his photography and was doing flat lay photos of pretty latte art. Piotr acknowledges that this led him to adopt a “pretentious” outlook where he would judge the quality of a cup by the latte art design. He had to unlearn all that to truly understand the value of a cup of coffee and what it represents to each customer. 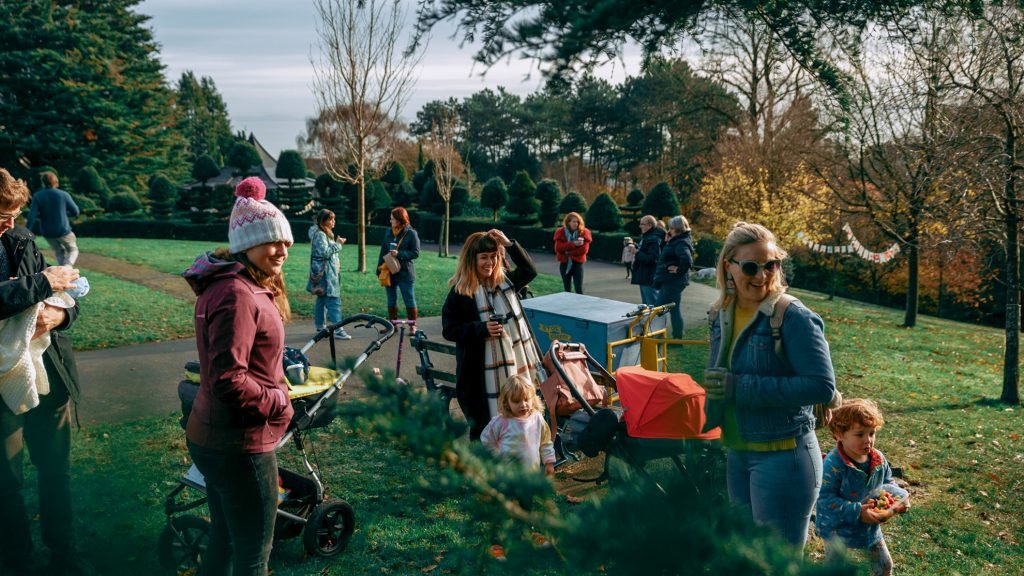 Stol Coffee bike in the park

Just like most coffee drinkers would tend to have a routine, Piotr’s regulars would come in and talk over coffee. When the pandemic hit, all this was just suddenly not possible and it became apparent that the reduced socialising might have a detrimental effect on the customers’ wellbeing. When the coffee shop maintained a takeaway window, one customer would go through three flat whites at the window just to be able to talk for two hours. Piotr felt that he had to be closer to the community. He was placed on furlough shortly after and he decided to quit and work on his own concept of a coffee shop. Today, Piotr rides his bicycle around his community in Penarth to bring coffee to people. He spends time talking to them while they sip on a cup of drip coffee that he serves from a flask. 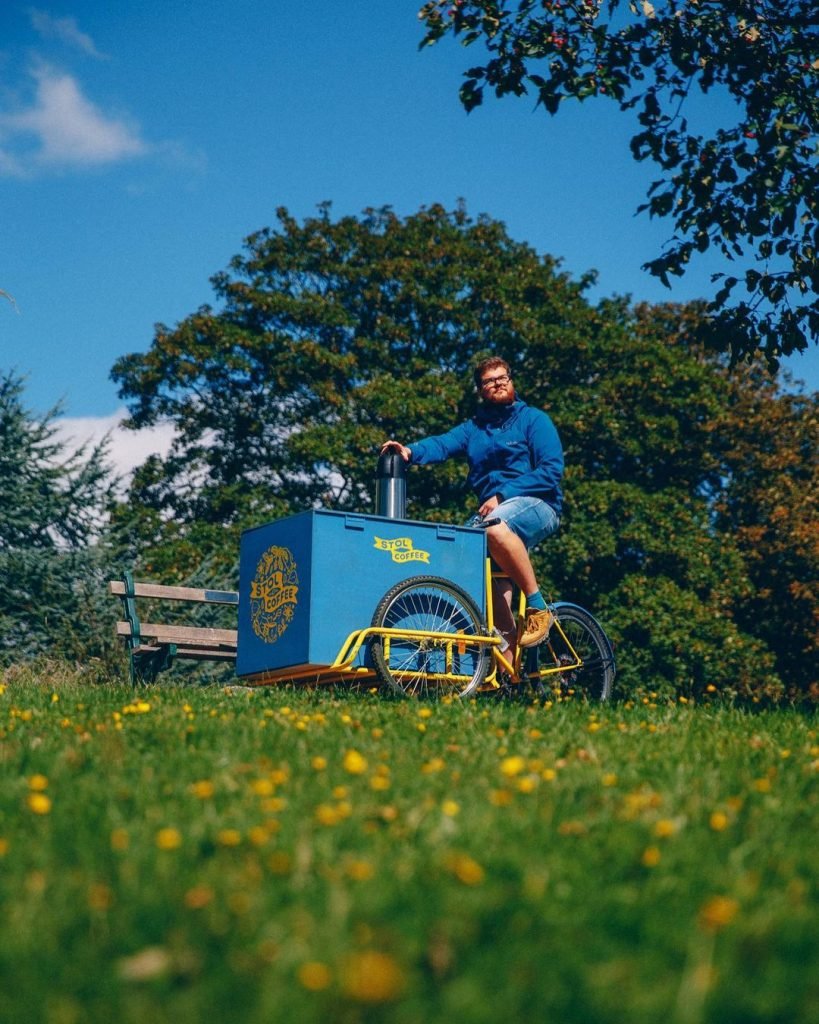 When Piotr came up with the initial idea to bring coffee around the community on a bicycle, he began to calculate how many households to reach each day that would enable him to sell enough coffee to pay his bills. The menu had to be simplified for portable and light equipment – this meant an espresso machine and grinder would be out of the question. Filter coffee was the way to go, but this was a tedious choice as in the UK most people prefer espresso-based drinks. Almost everyone he asked told him no one was going to buy his drinks.

Piotr ended up going with two items on the menu – an 8oz cup of filter coffee that costs 2.6 pounds each, and cookies he bakes at home. He was confident that as long as he could gain his customers’ trust through conversation, people would accept the filter coffee and even begin to realise how good it could taste. Even though he had this hypothesis, Piotr could not have imagined the kindness and goodwill he would along the way.

In the beginning, when he was sourcing a supplier for beans, he got in touch with Round Hill Roastery. The founder Eddie appreciated Piotr’s motivations for his project. There is a mutual understanding between both of them that business should not merely be transactional, but rather a foundation for strong relationships. Eddie was not just willing to take a hit to his earnings to provide better coffee at an affordable price in support of Piotr’s cause. He went further to provide additional assistance for free when Piotr required help with a brewing device. As a result, Piotr only uses Round Hill Roastery’s beans and they, in turn, get a lot of traffic from him in terms of sales.

As for how he got cookies on the menu, Piotr recalls a conversation with a former manager where he aired his views that the coffee shop should not be serving frozen cakes since they had the capacity to bake their own. His manager retorted by sarcastically telling him

“If you had your own coffee shop, you would bake every day, would you?”

Well, that is exactly what Piotr did, with some help. Some time back, someone from a local bakery reacted to his Instagram content to discuss a common interest. They exchanged occasional messages for over a year. Then when Piotr started his bike shop, he reached out to that bakery for advice. He received the full cookie recipe in return, in support of the meaningful work he is doing. 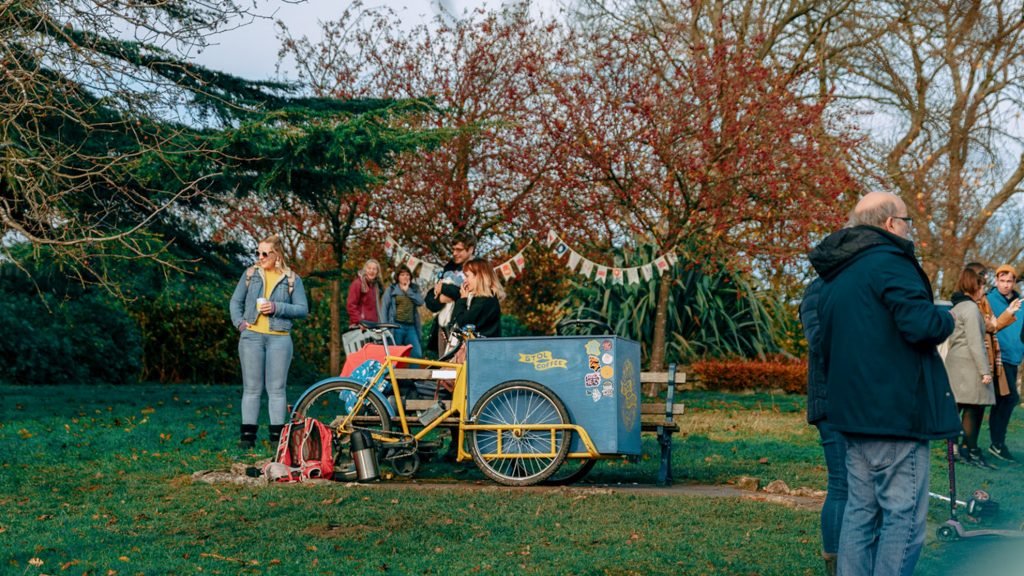 These incidents underlined Piotr’s belief in community spirit and people coming together to solve problems. He cites Simon Sinek as a source of inspiration to always “start with why”. We tend to lean towards things that are convenient and easy, even if we may not completely like them. Instead, Piotr recommends looking inwards to discover your identity and pursue what you truly enjoy – otherwise you will remain disenchanted because you struggle to find meaning. At a time of need, he looked to this reasoning to keep going. 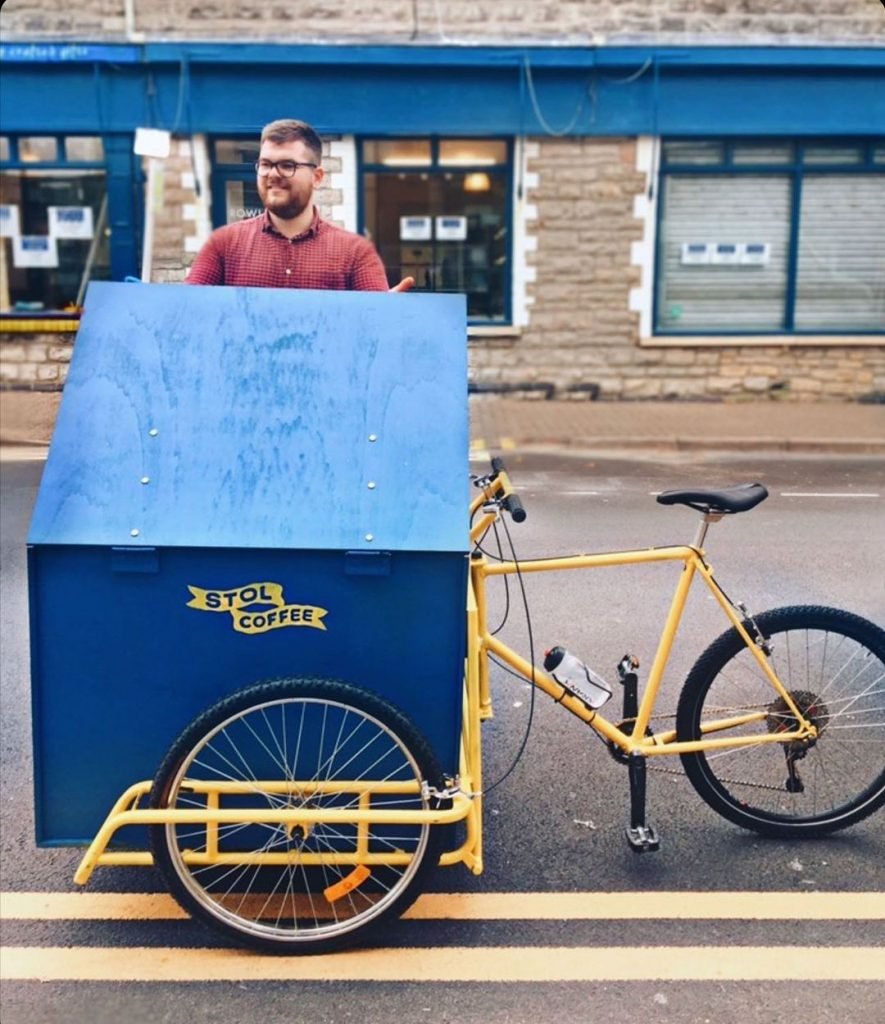 Pitor and his coffee bike

When Piotr’s bicycle broke down after just two weeks, he received unexpected assistance from one of his customers, a 72-year-old lady Colette. Without Piotr’s companionship, she usually would not talk to many people. Colette appreciated Piotr’s work and gave him a referral to Clive’s repair services when she heard about the state of the bike. Clive, in turn, did not request a fee from Piotr, nor did he ask who might have referred him to the shop. He simply believed in Piotr’s project enough to lend a helping hand.

Still, it was only a matter of time before the bicycle would give way. After that first repair, it quickly fell apart again. On the verge of throwing in the towel, Piotr sat down in his garage and thought about the ‘why’. The bicycle was simply a means of transporting the coffee to the community. He figured if he could not cycle, he could at least push the setup.

Piotr would set up his cart in the park on Sundays and invite the community to come down for conversations over coffee, at no charge. He always tells them not to pay on that day, but eventually, those days turned out to be the best for his sales. He recalls a conversation with someone that made it all the way on crutches, who told him it is great that he is doing this. Otherwise, he would not talk to or see anybody that day. That coffee session was one of the rare opportunities that he could speak to a human being, and he made sure he attended despite the difficulty of limping there on foot. Experiences like these have given Piotr a new perspective. He now finds it “egocentric and selfish” to not do something because of his insecurities, when that would be so meaningful to another person. This continues to push him out of his comfort zone and take on new challenges.

With the generosity of the people Piotr met along the way, the GoFundMe campaign eventually raised 7,600 pounds in 12 days, just enough to cover an affordable bike that could support the front load of the goods and his heavy frame. Piotr recounts that everybody he spoke to for the last seven months had been touched by their meaningful conversations and it was thanks to them that he got to put something like this together. This would allow him to continue pedalling his mission forward as the current pandemic plays out.

Piotr’s experiences show us that when people connect with your purpose emotionally, they are more likely to trust you and demonstrate their support. Through personal conversations with his customers, he has been able to find a way to get them to understand and appreciate coffee.

Today, hardly anyone asks for sugar anymore. They are impressed that coffee can taste so good without it.

Good things happen when the coffee community works together. This is a coffee project generate from and give back to the community, building connections by giving a new platform to you and baristas through sharing coffee recipes. We’ve reached our goal on Kickstarter in just 12 hours. Go now and support us.

NOT A BARISTA Podcast

We are constantly inspired by all the amazing stories of baristas around the world and we want to take this opportunity to introduce you to our newest project: The I’M NOT A BARISTA Podcast. This podcast will be sharing all our incredible and amazing coffee stories from baristas and coffee people around the globe.

Zed is a Marketer and a coffee geek from Singapore