For many people who have fallen in love with coffee, they describe the taste of amazing beans that captured their imaginations of what future brews could taste like. Some become obsessed with the scent, others become fascinated by the first aromatic bloom. For Claudiu, it started off with a job.

In his home country of Romania, Claudiu started off his coffee journey behind the bar as a bartender. In between mixing drinks and pouring cocktails, Claudiu would get the odd coffee order from the occasional bar patron. Unlike other bartenders who tended to not like making coffees, Claudiu found a strange attraction that we coffee lovers all know too well. The more coffees he made, the more interested he became in making coffee, even more than bartending!

The career change from bartender to barista led to a job opportunity in London, and he moved there in September 2015. Starting in restaurants, he continued bartending as he explored and continued to learn more about the wonderful world of being a barista. 4 years into his journey, Claudiu finally found his ultimate passion – that of making latte art!

Ever since he was young, Claudiu had a talent of drawing and latte art was basically drawing – but with espresso and steamed milk! Claudiu says,

“For me, latte art means flair inside the coffee world, just like how bartenders can do tricks with bottles and shakers. Latte art is something that I can play with to bring smiles to people’s faces.”

On his Instagram page and Youtube channel, it is plain to see that Claudiu pours his passion into his craft of latte art. He takes from his bartending days the skill of being disciplined and organised in his routines when making coffee. “If you don’t respect your daily routine, it is very hard to improve and progress, just because coffee has so many more aspects that you have to be focused on,” he reflects.

As a latte art practitioner, Claudiu loves being able to put a smile on people’s faces with more than just the taste of good coffee – it also means making the coffee beautiful to the eye as well. And being a true coffee lover, it is a constant struggle for Claudiu to tell people not to add sugar into their coffee!

As with the rest of the world, Claudiu’s journey has hit a roadblock with the current pandemic – but that has not stopped him in the slightest! He has taken his journey online to Instagram and YouTube, where he continues to document his latte art progress. He looks forward to being able to make coffee again professionally in the future, and he will let us know where he can be found if any followers are in London! Career-wise, Claudiu also hopes to become the next UK Latte Art Champion and to be able to compete at the World Championships. 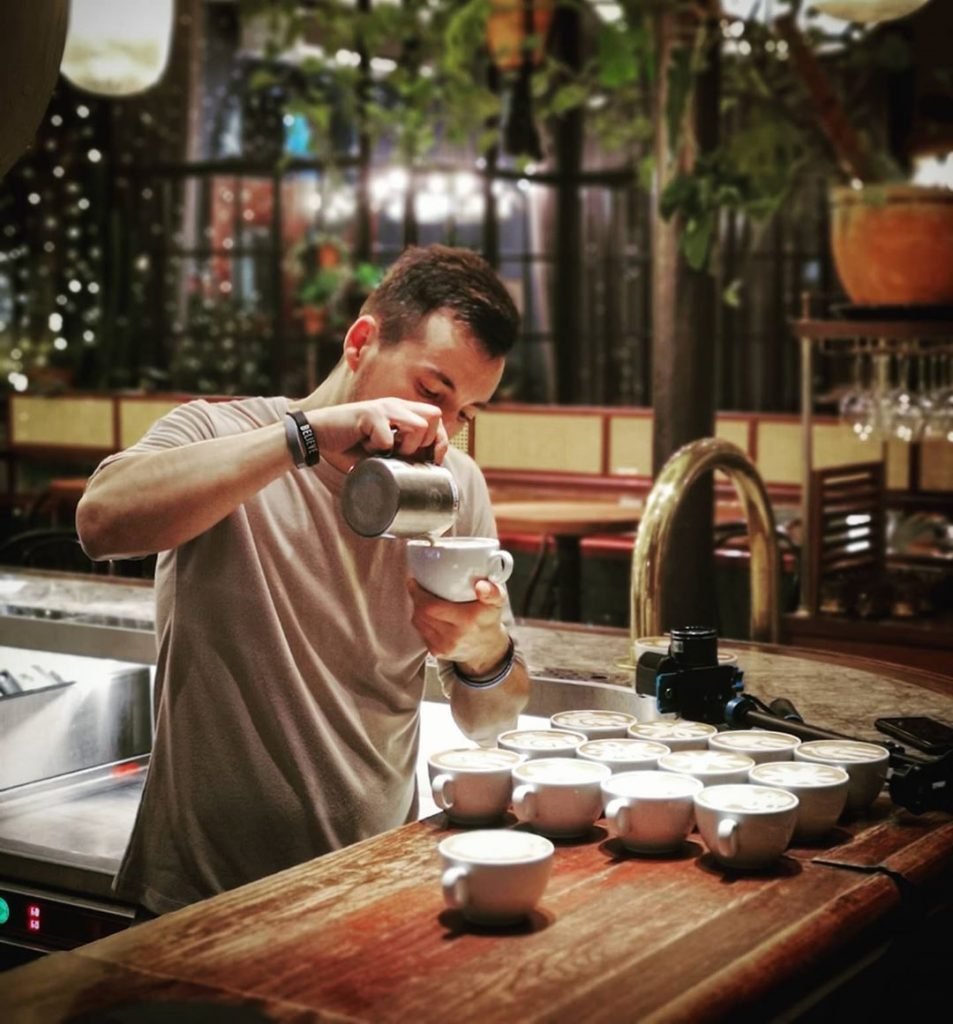 With an experienced bartender and barista, I just had to ask Claudiu for his best coffee and liquor recommendations. He smiles, “An espresso martini is the most obvious choice, but for anyone who enjoys a good latte, a shot of Baileys mixes well with the espresso. It also makes for good latte art.”

And any tips for good latte art? “Use full-fat milk which is high in protein and UHT treated,” Claudiu advises.

– advice that all of us coffee brewers and lovers can always benefit from.