Carlos Ortiz is a family-oriented man with a love of music almost as strong as his Café Con Leche.

He began playing the guitar when he was 16 but left music to pursue a different career path. Although he still has a passion for music, he found his purpose in coffee. 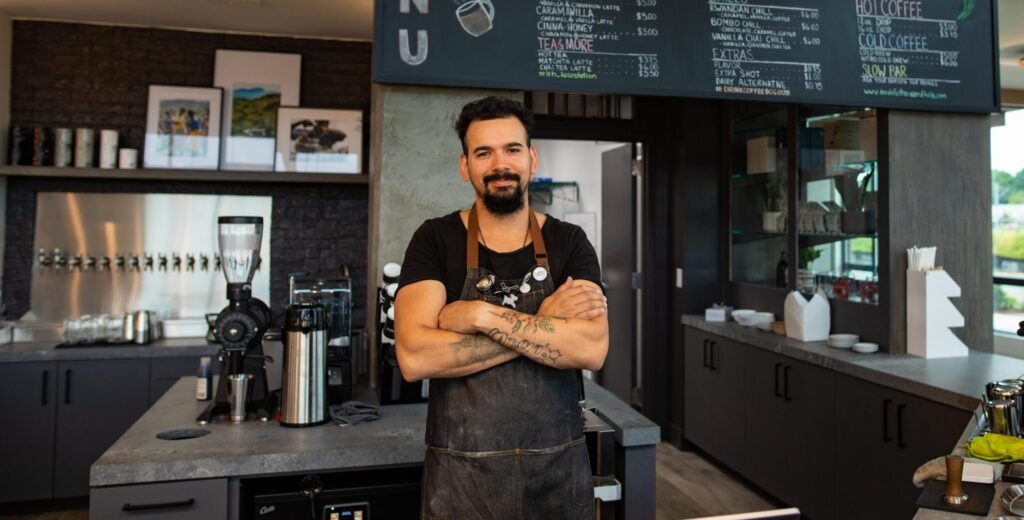 Carlos Ortiz is at work

For Carlos, his most memorable cups of coffee are hugely dependent on the company. Some of his most notable drinks were the ones he shared with his mother, “ Now that was a person who knew how to make great Puerto Rican coffee”. They would sit there for hours, enjoying the caffeine and chatting away. “ The same applies to the people I love.”

Like many of us, his passion began in 2007 while he was at college. All those all-nighters and cramming sessions, coffee was what got him through it. Only ten years later did he begin to appreciate the drink for more than the caffeine kick. In 2017 he began to dive deep into craft coffee and brewing methods. What sucked Carlos into the industry was the science behind the drink. He says that the coffee trade is constantly developing. It continues to show us how the drink should be served and enjoyed.

“ That’s what keeps me in the game. I love studying it. I love building relationships over it. I hope I never stop having a passion for this trade.” 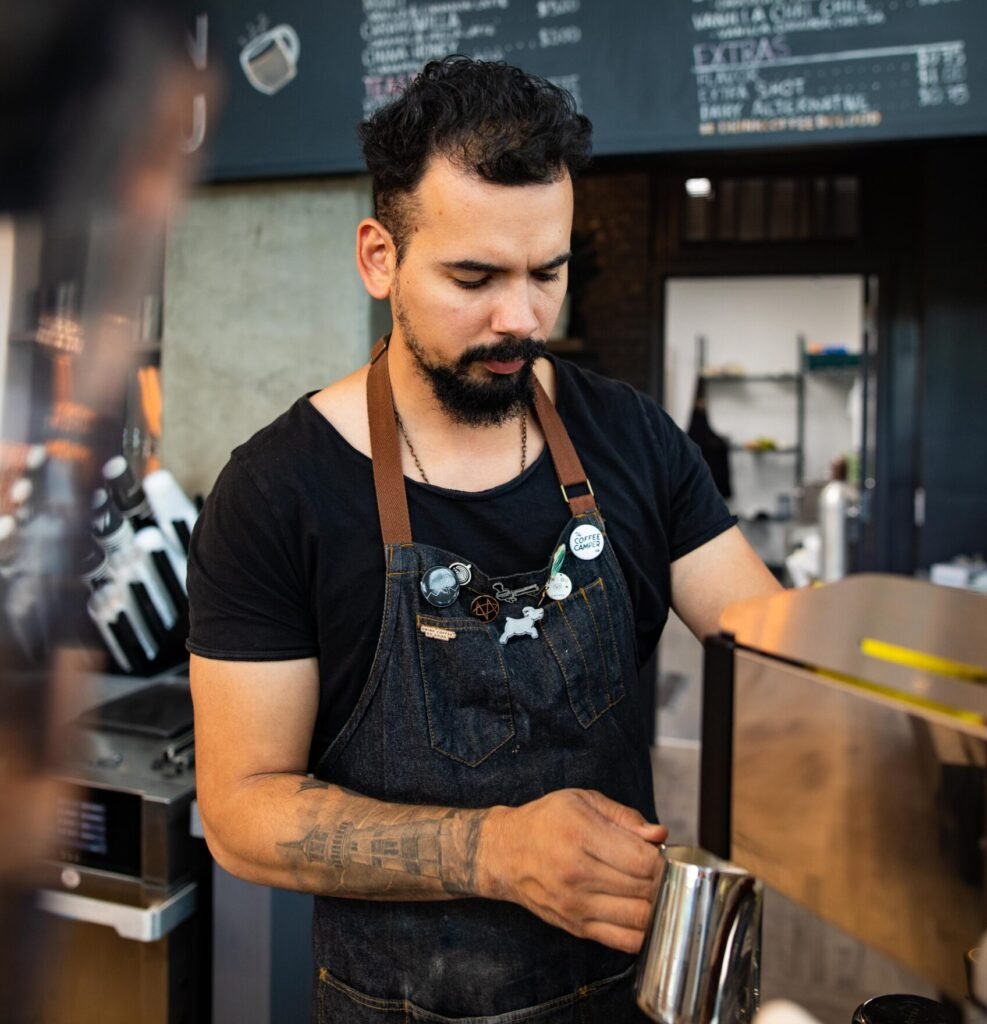 Carlos Ortiz is frothing the milk

His first amazing cup of coffee, apart from his mother’s of course, was an espresso at a local coffee shop. He loved it so much he asked if they were hiring, and sure enough, they were! Carlos started working part-time at Land of a Thousand Hills Coffee-  based out of Atlanta, GA- and fully committed to the company in 2019. His favourite part of his work has remained the same throughout his career. Opening the shop early in the morning, brewing the drip and calibrating the espresso bar, so the coffee is perfect before any customers walk through the door.

He takes pride in every cup of coffee he serves, shown by the taste and the latte art.

To him, success is through seeing his fellow baristas enjoying the art of coffee and doing what they love most. It is the community that baristas create and share with their customers that Carlos loves so much.

However, the pandemic brought hardships for him and his team. They had to close the doors to a new cafe they just opened. “It was a ghost town for us”. At the time, he was transitioning back into the coffee life from another job, so he was still working solo bars from early in the mornings until late afternoon. He and his wife had a new baby, and it became too overwhelming for Carlos. He couldn’t have done it all without the support of his wife,

“My wife was my biggest cheerleader during the pandemic. Still is”. 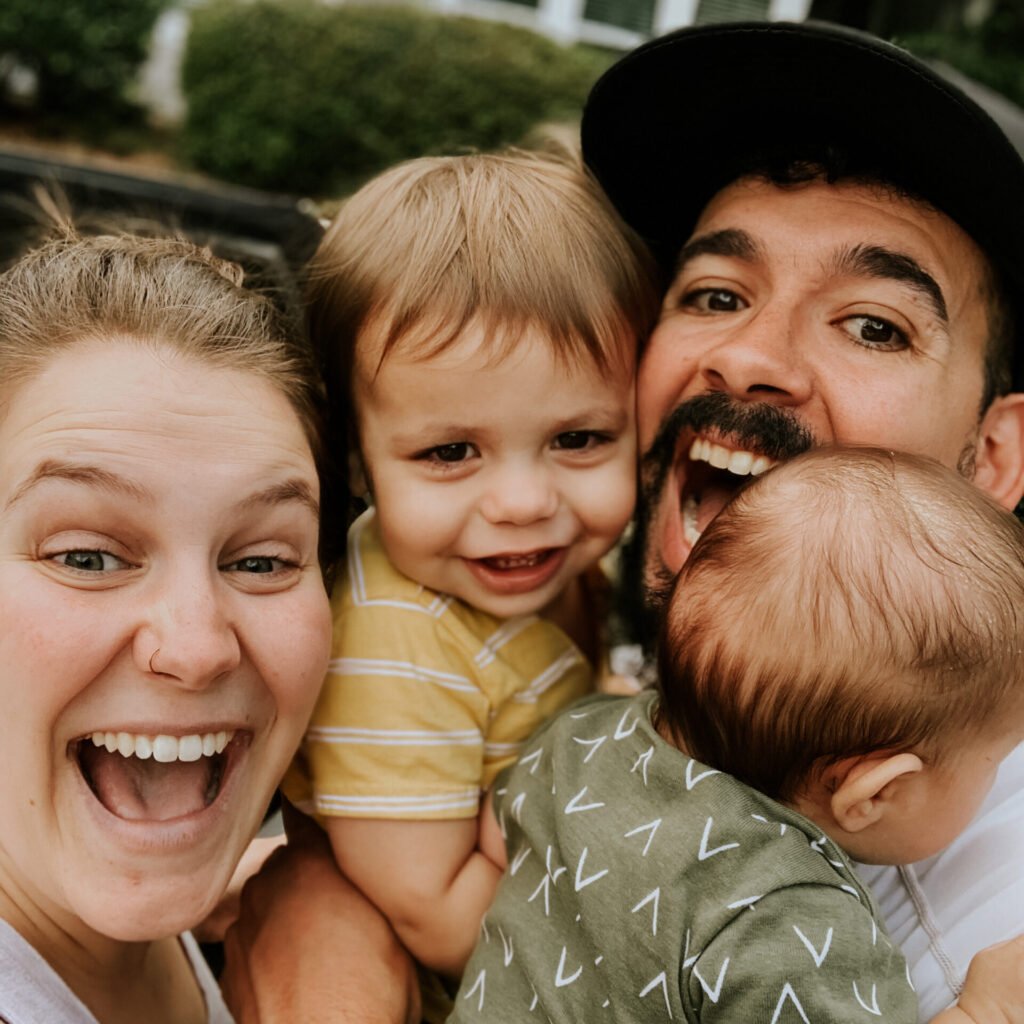 Carlos Ortiz and his family

She believed in him and recognised his passion for coffee and the company; they both knew he belonged in this industry,

Carlos was part of a community called Halcyon. It was a place where the community members came together to eat, drink and shop. But when the pandemic hit, it struck them hard. It was difficult for him to watch such a lively community turn silent. During that time, he leant a lot about his community, everyone all trying to keep their business afloat.

“In a time where it felt like we had to start over again, the businesses there leant on each other for support. In our case, we provided coffee to those who needed it.”

Since then, the doors have reopened, and the light at the end of the tunnel is getting brighter. Carlos emphasized that he would never forget the memories that he created with his friends alongside the help of coffee that was brought about by the pandemic.  During this challenging time, he was lucky to have the support of his family.

“The support I get from them is what drives me to do the things I love.”

Carlos had his family and his community to keep him going, but we at I’M NOT A BARISTA recognises the difficulties that the pandemic has brought onto our barista friends, the coffee community and the society we live in; this is why we have started our Tip A Barista initiative. If you or anyone you know is struggling and worried or just needs someone to talk to, please see the websites and services that we have listed below.

Red Cross
The British Red Cross support line provides support in more than 200 languages, supporting people who are lonely, worried and finding it difficult to access food or medication in the UK.

Mind
Mind provides helplines for information and support by phone, text and email. They also have a supportive online community for anyone experiencing mental health problems (UK).

Mental Health Europe
This website helps provide numbers for helplines and other resources within Europe.