The Pandemic vs. The Hospitality Industry

There has never been a time in this century where the world has been more unified against one issue than it currently is with COVID-19. In the space of a year, it has gone from a term that no one recognised to something so universal and so common. It is truly astounding. This pandemic has created countless challenges, countless obstacles and countless losses for billions of people. With a suffering global economy and drastic restrictions placed on so many people’s lives, one must ask, how are we all doing?

Not so great, it would seem. This pandemic has completely changed the way in which we interact with each other and carry out our daily routines. Our social lives have taken a massive hit; with many of us having spent our summers at home; unable to meet friends and enjoy the nice weather. Along with this, so many people are now out of work. The hospitality industry has suffered greatly from this massive global change, with hundreds of millions no longer able to go out in public and socialise with friends and family. Because of these restrictions, pubs, clubs, restaurants, bars and cafes have all had to close their doors for significant periods of time to help stop the spread of this virus. And, when these establishments were forced to close, the jobs held by millions of hospitality employees were either lost or put on hold.

This meant that almost every front of house employee in any hospitality venue could no longer work. Now, the effects of this differ in each country. For example, in the United Kingdom, people could apply for the ‘Furlough Scheme’ if they had lost their job. This scheme offered people up to 80% of their usual salary while they were out of work. However, though 80% sounds substantial, people living pay-check to pay-check could no longer support themselves or their families in the same way. There are millions of people in the United Kingdom who have to scrimp and save in order to have a roof over their heads with food and amenities such as gas and water. Many of these struggling people happen to be hospitality employees on a minimum wage salary. So, this government scheme left many out of pocket with nowhere else to turn. Now, how does this affect one’s mental health? Losing your job and a chunk of your salary, all the while adapting to this new way of life? 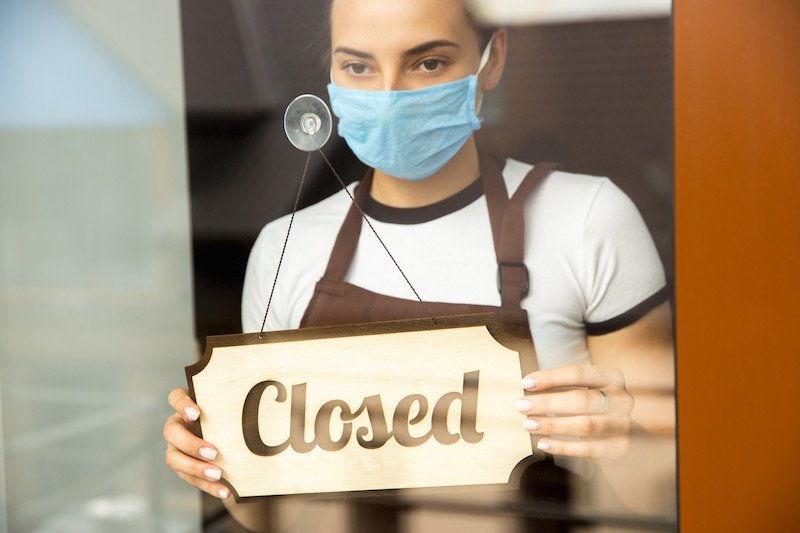 Many coffee shops have to close for the 2nd time

In a survey conducted among a number of hospitality employees, it was found that 33.3% felt their mental health was moderately affected when they lost their jobs in hospitality due to the COVID-19 pandemic, and 25% claimed their mental health was severely affected. So, that’s a total of 58.3% of people seeing noticeable negative changes in their mental wellbeing. Along with this, an astounding 66.7% claimed that their finances had been drastically hit by their job loss. Along with financial struggles, 75% of survey takers claimed they missed having a job during the pandemic. So, not only did people lose their jobs and suffer financially, they truly felt the loss in their daily lives without having a job to go to. The stress of financial pressure along with a drastic change in one’s lifestyle can very easily lead to mental health struggles, and this has been seen to occur with millions of people worldwide.

It was found in a study conducted by Mind.org that more than half of British adults and over two-thirds of young British people said that their mental health had declined during the period of lockdown restrictions. So, without even considering job losses, the restrictions placed upon people by the pandemic has affected their mental health. However, even people who have kept their jobs in hospitality have suffered. In a survey conducted among both former and current British hospitality employees, a shocking 50% claimed that they feel workers in the food and beverage industry are now being treated far worse by customers than before the pandemic began.

This change in customer behaviour could be due to restrictions in establishments meaning that employees have to control how customers move around, or the fact that waiting times are generally longer now that fewer employees are allowed to work on anyone shift. Whatever the reason, hospitality employees are clearly not being treated how they should be. Alongside this, employees now must wear the correct PPE and constantly socially distance as much as possible. Working a busy shift in a café or restaurant is hard enough, but combine this with a mask making you uncomfortable and possibly restricting your breathing, and it becomes clear how hard it is to work in the food and beverage industry as a front of house employee during the pandemic. So, not only have hospitality workers had their jobs permanently or temporarily taken away from them but when they have returned to work, they are faced with a whole new set of challenges. It is painfully apparent that this pandemic has severely affected the lives of millions of hospitality employees, and we truly do not know when the world will begin to go back to normal.

It almost feels like this is the new normal. Wearing masks, sanitising your hands 10 times a day, keeping a distance from everyone around you, there is no end to the ways in which our lives have changed. There is also no guaranteed date by which the pandemic will truly be able to be considered ‘over’. At the moment, all we can try to do is support each other. If you feel that this pandemic has affected your mental health, and you are looking for support, there are some numbers and links below which can provide such support.

During these difficult times, it is important for us to stay connected. So, we at I’M NOT A BARISTA have launched the #brewathome campaign. This allows coffee lovers to stay in touch during the pandemic, providing a warm and friendly platform for all. People can connect and share via a number of online events, such as challenges and Zoom parties. As part of this bid to keep people feeling in touch during these times, we have recently launched the Coffee Moustache campaign. We have done this to raise awareness for mental health during ‘Movember’, and are encouraging people to take a picture of themselves with a coffee ‘moustache’ to help raise awareness in this campaign and also take part in the giveaway we are holding. We have teamed up with some of our partners to give back to the coffee community, and you can take become a possible winner by participating with your coffee moustache picture! You can find out how to sign up to the campaign here. Get creative with your coffee moustache and bring a smile to people’s faces this month!

We just made another donation, $500 USD to Adelitas in Mexico

We set up this goal of helping Adelitas in September 2022, and we finally reached it today.  The Adelitas Cooperative is a group of coffee women farmers who have been growing and…
Read More
13th January 2023 in Articles

New method to brew your coffee in 2023

Coffee is fantastic, and we love trying new brewing methods. We saw @evida_lee on Instagram exploring new brewing methods with a sifter, reminding us MOMETNEM is the ultimate grinder for…
Read More
From the beginning, we set out to create a platform meant to have a global social impact that can help to transform the professional image of your average barista while also improving their social value and offer them support in maximizing their contribution to the coffee industry. We empower coffee people behind the cup and give them more voice.
Buy a T-shirt, and help a barista. We donate our profit to help baristas in need.