Aylin’s journey into coffee can be described as sweet serendipity. Fresh out of university in 2016 with a business degree, the Bonn native packed her bags and moved to Berlin to begin her career in sales and marketing. For someone who would jump at the chance to live in a place with sun and sea all year round, it was not quite the southern beaches of her ancestral Turkey where she goes to kitesurf every other summer. 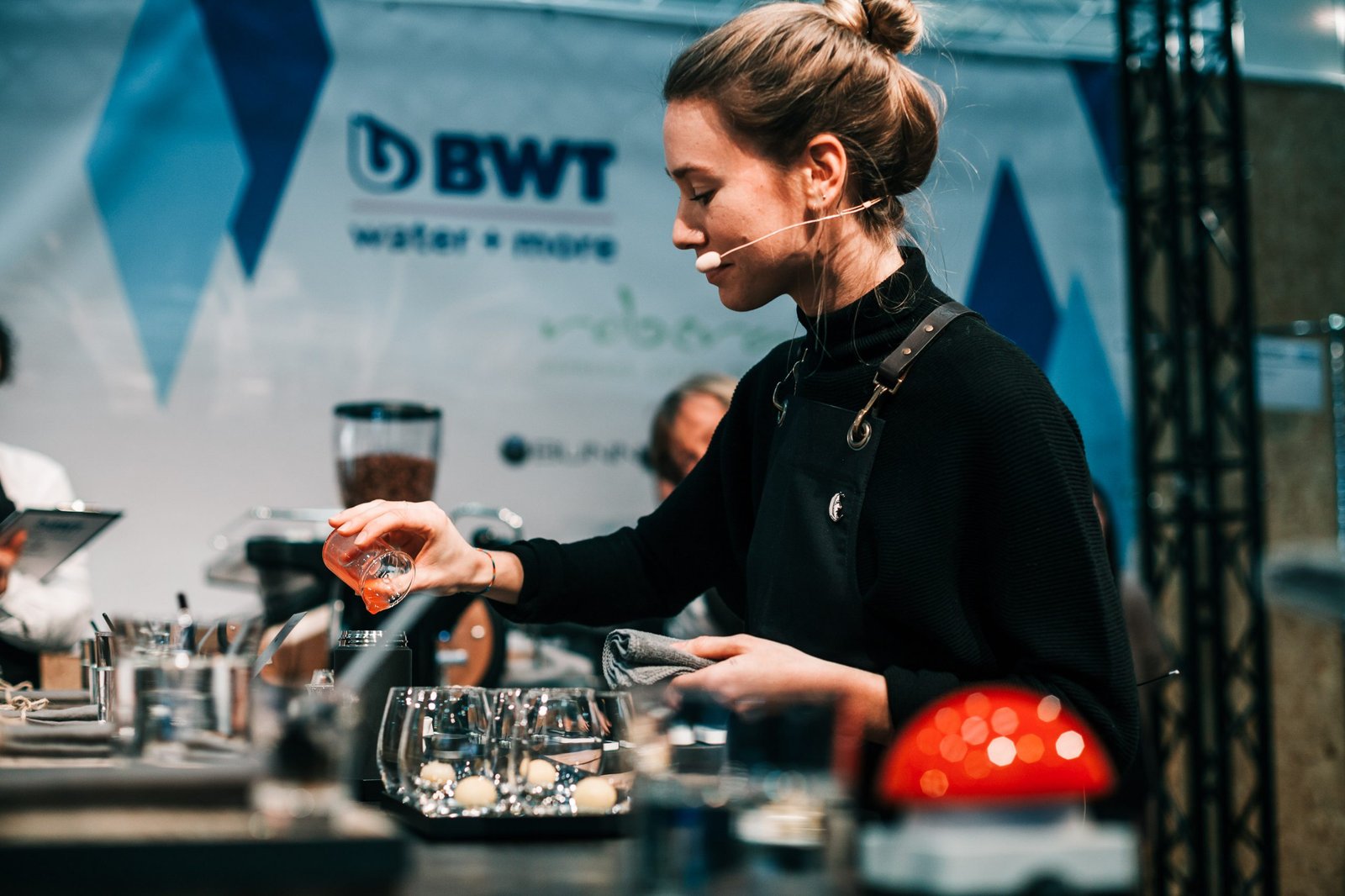 Aylin Ölcer is at competition

As it happens, there was a roastery beside Aylin’s workplace that she began to visit often once she settled into her new routine. The nice atmosphere and lovely smells of coffee being roasted and brewed were a welcome distraction from the office. She may not have realised it yet, but that was her introduction to Berlin’s burgeoning specialty coffee scene. After a couple of visits, Aylin started to realise that there was so much more to coffee. She wanted to find out more.

She soon began to visit every roaster and coffee shop in Berlin with a determination to taste the best the city had to offer – her favourites include Annelies, TOKI and Bonanza. What she found was an entire world of flavour right at her doorstep. Fast forward a year, Aylin had quit her job and landed in Bremen. The specialty scene here was rather nascent at that time and this seemed like a good place to try her hand at being a barista. Hence she joined Daniel and his team at Yellowbird Coffee for her first job in the industry. In hindsight she feels privileged to have been accepted back then as it remains difficult for people with zero experience to break into the industry.

Having hands-on experience quickly accelerated her learning as she started to publish brewing guides on the Cross Coffee blog and made personal trips to coffee events out of interest. The first event she travelled to was World of Coffee 2017 in Budapest, followed by a trip to her favourite city of Amsterdam the following year where the World Barista Championship was being held. Back then, she was a spectator in the stands watching on as her peers showcased their craft on stage. Perhaps this was the spark that pushed her to enter competitive brewing. In January 2019, Aylin entered her first competition – the German National Barista Championship held in Nürnburg. She placed fourth that year.

Being so close to the top, this pushed her to work even harder. She knew that she wanted to compete the next time the championship came around. For the rest of that year, Aylin staged at World of Coffee Berlin, made long trips to coffee festivals in Istanbul and New York, and finally completed the SCA professional barista certification. Then to coincide with her entry into the 2020 national championships, she embarked on her first origin trip to source her competition coffee, flying out to Nariño, Colombia to meet Carlos at Finca La Estrella.

Aylin spent time conversing with Carlos to deliberately uncover every single detail of the coffee that his family had cultivated and produced – information that would help her massively in the build up to the final. More than that, it was here that she had an epiphany. Standing in the middle of that vast plantation, 10,000km away from home, Aylin was able to place her journey into perspective – everything that had led her to this cherished moment, from Berlin to Bremen and around the world. She had found her purpose, and from then on she knew she firmly belonged to the world of coffee. 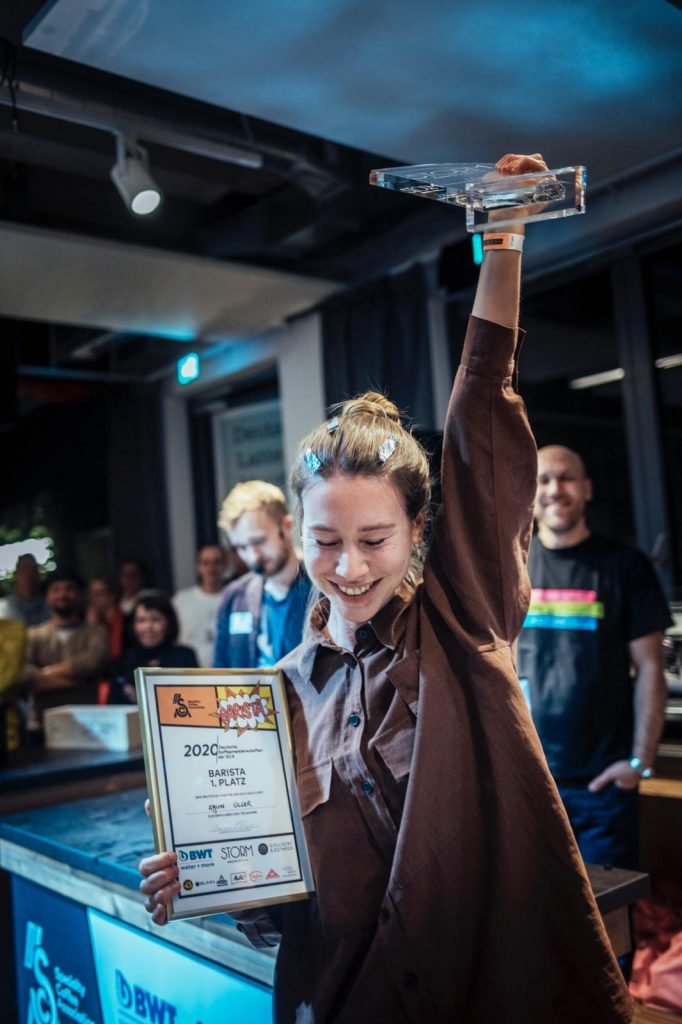 As soon as she got back home, Aylin confidently put her newfound knowledge to use. In a last push for success, she bid an emotional farewell to her colleagues as she moved to the city of Münster to join up with two-time German barista champion Erna Tosberg at Roestbar. Erna is well known as a competitor and judge on the championship circuit and her depth of knowledge was bound to raise Aylin’s standards. Working with an entirely new team in another city, Aylin remembers that last month before the finals as the hardest and most challenging moment she has ever faced in her career. Yet, as she affirms, she is never one to give up.

When we asked Aylin what success means to her, she reveals that it is simply being good at what you love and also being respected for your craft:

“When you do something wholeheartedly, you will eventually succeed.”

On 1st March 2020 on the stage of the German National Barista Championship in Hamburg, she did it. In just three years in specialty coffee, Aylin Ölcer had become the national barista champion. 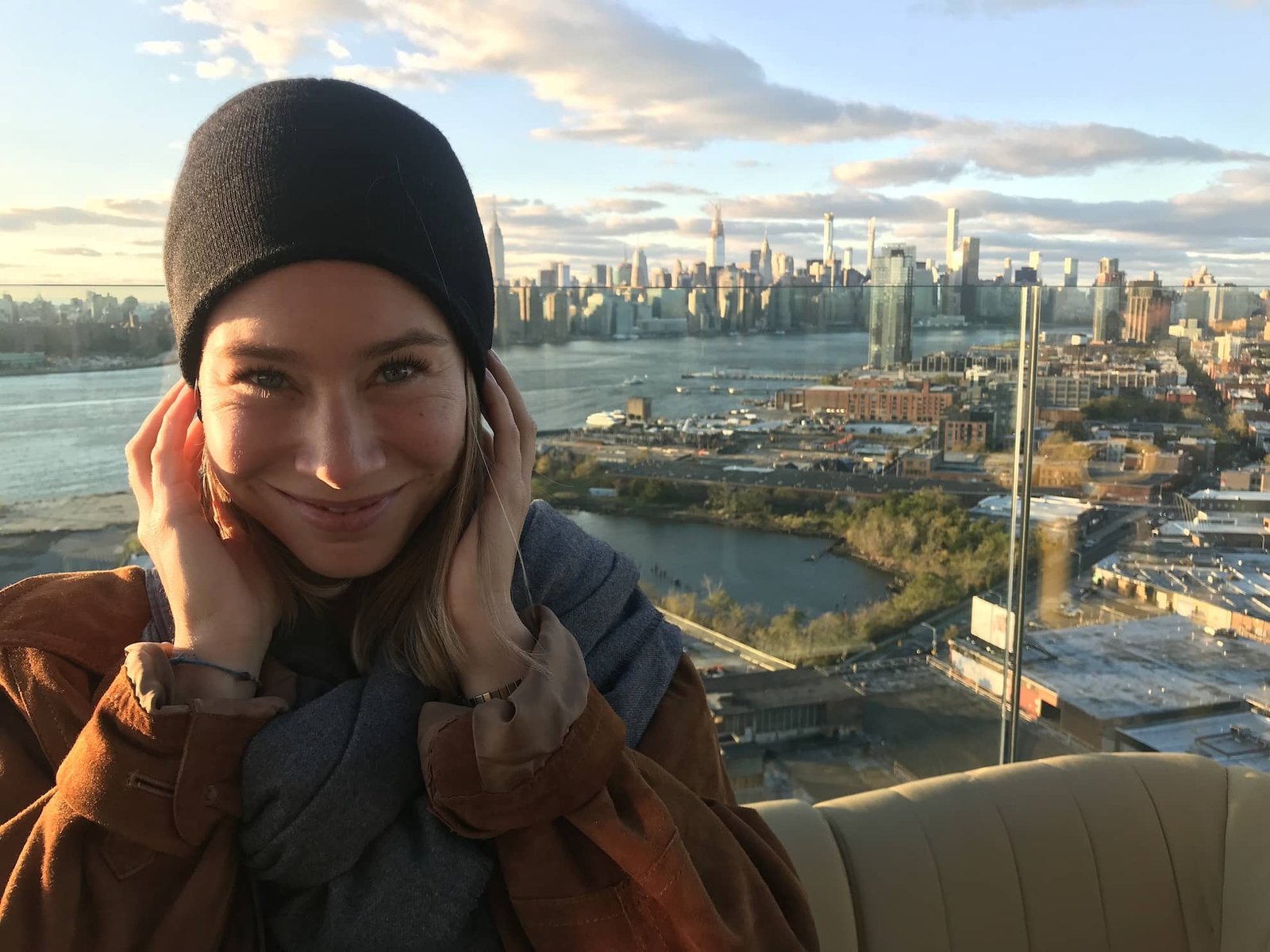 Her newfound status may be one of the top credentials in the industry, but the newly minted best barista in Germany does not intend to slow down anytime soon. The 29-year-old has only just begun her career in coffee and she believes that there is still so much to learn and discover. Her ultimate ambition is to thoroughly understand the whole supply chain and be adept in every single area, from origin through to serving the brew to the consumer.

However, at times she feels that she has her work cut out for her. For one, there does not appear to be a properly structured education system to succeed as a coffee professional, meaning one has to independently seek and hustle for opportunities to go far in the industry, oftentimes requiring a combination of luck and privilege that is scarcely attainable. The working conditions are not ideal either, compounded by the considerable expenses necessary for upskilling and taking part in competitions.

As a female barista, Aylin goes on to highlight a perennial struggle facing women in the industry – finding herself having to prove her worth over and over again. She recalls how quickly her illusions of a career pathway as a coffee roaster got pulled like a rug from beneath her feet. She was frequently questioned about her lack of experience and was quickly turned away when she asked for internships at roasteries. In one unsavoury instance, she was rejected on the presumption that a woman with her lithe frame would struggle with the physically demanding aspects of the job. While numerous employers might express their disdain for such misguided attitudes in the industry, this demonstrates that there is still some way to go if we are to offer universally equal opportunities. Aylin wound up spending days visiting roasteries to make new connections and friends in the coffee community. Eventually, this drove her to map a plan for herself; she would first become a barista and upskill herself with SCA certified courses, as a means to achieve her goal of becoming a roaster.

In the face of all these challenges, Aylin remains undeterred. She sees it as a chance to cross boundaries and get even better. While acknowledging the possibility that things may not always go her way, she admits to being a high achiever who is willing to strive for her goals through continuous learning and practice. Aylin also credits the people around her for lifting her up and supporting her along the way. She is extremely proud that she was able to repay their faith with her victorious showing in the national finals.

While victory meant Aylin qualified for the 2020 World Barista Championship in Melbourne, the pandemic soon brought the world to a grinding halt. The championships were cancelled and qualified competitors have been rescheduled for the next edition. Aylin is now raring to go at the 2021 competition in Athens should that materialise later in the year.

In the meantime, she hunkers down for a good read (her pick is The Architect’s Apprentice by Elif Shafak) and is happy to enjoy the comforts of her new coffee home in Berlin. In the latest twist of her coffee adventure, Aylin is now based at the Kaffeekirsche roastery in Kreuzberg – the very same roastery where she first fell in love with coffee. And today, she’s roasting the beans.

It gives her great joy to spread awareness of coffee and she warmly welcomes anyone who is interested to find out more. Between the occasional homemade cezve and a quality brew of her chosen Kenyan washed or Ethiopian natural filter coffees, Aylin simply loves the presence of a diverse crowd and being able to meet people from different backgrounds. In her own words:

“It never gets boring!”