Explore home brewing recipes from around the world with this international platform’s upcoming card deck.

The original article was published on Barista Magazine on February 4, 2021 by Mark Van Streefkerk

I’M NOT A BARISTA is an international platform that supports baristas by sharing their stories, creating community connections, providing financial support to coffee competitors, and more. A handful of board members, volunteers, and interns run this not-for-profit organization. Since its inception at the end of 2019, I’M NOT A BARISTA has shifted to help support coffee workers who were suddenly underemployed during the pandemic. Their #brewathome Instagram campaign was a direct response to help remedy the lack of community that many baristas experienced during COVID-19 by inviting them to share their coffee knowledge with a virtual audience. 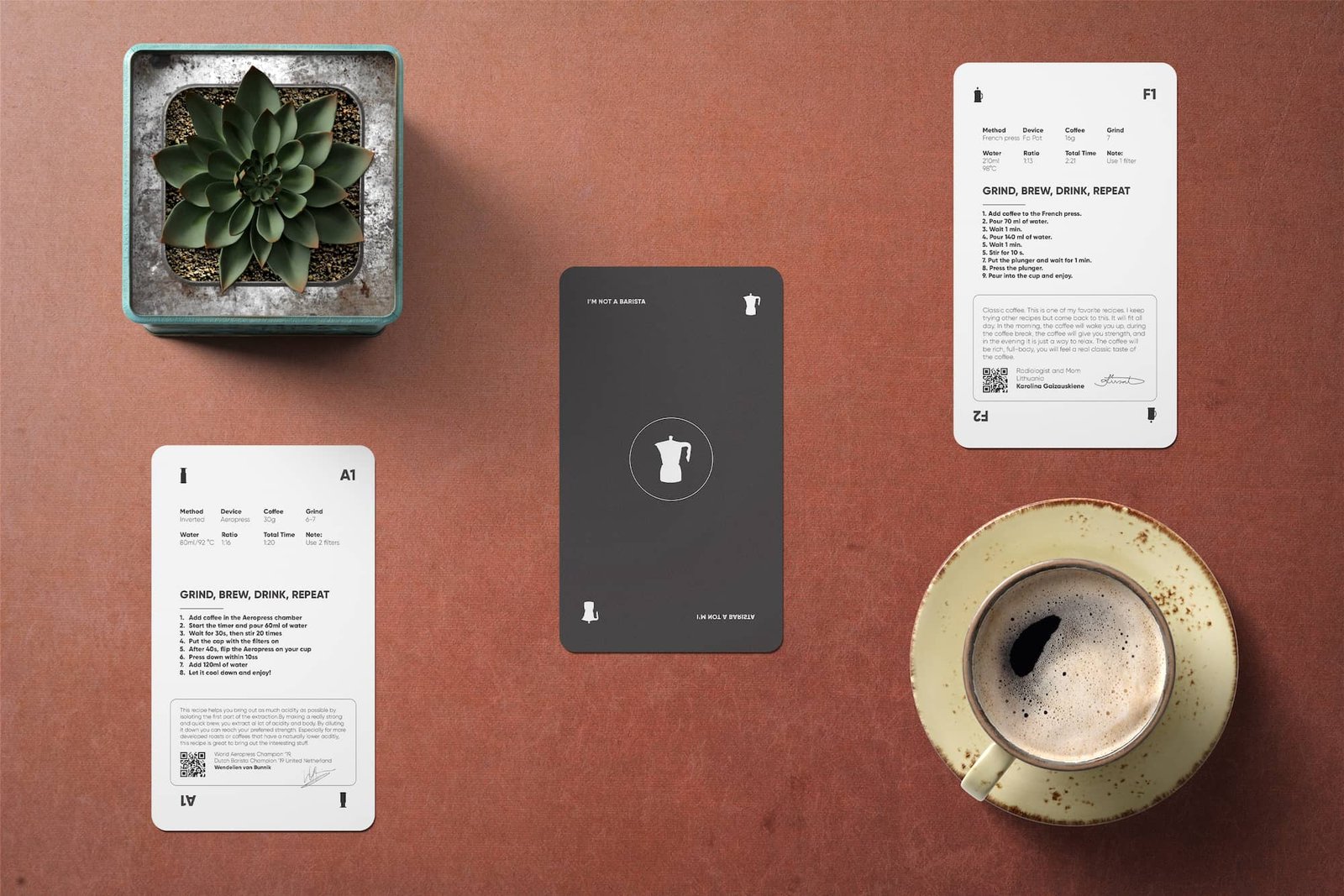 Explore brewing recipes from coffee lovers and pros around the world with the BREWING GUIDE card deck coming soon.

“We wanted to inspire people to share what they know to help others,” says I’M NOT A BARISTA founder Micky Wang. “Baristas could share their coffee knowledge, tips on social media to help others brew coffee safely at home, and meanwhile support their local coffee community by ordering coffee online to help roasters. It was a big success for us.”

Collaborating with more than 150 roasters around the world to host online events and giveaways, the group gave away over 400 items of specialty-coffee and brewing tools. Their next project seeks to go further in their support of baristas through the sales of the BREWING GUIDE card deck. “We wanted to do something that can work with the shared coffee knowledge from the global community,” Micky says. “(Board member) Kaie Bird suggested we start a project collecting recipes and share (them) online with others; this is the root of our CARD DECK  project.”

The concept was developed into a card deck—a hand-held, tangible way to explore brewing recipes offline. Contributors can send in their recipe ideas, which are then tested by a volunteer group of 66 coffee people from more than 30 countries. Based on the first group’s feedback, a smaller group of pro baristas have a second-round evaluation before making the final decision of what recipes will become part of the deck. Brew methods include French Press, pourover, AeroPress, and Moka pot. If a recipe is accepted, it will get its own card with a scan code for the contributor’s special page on the I’M NOT A BARISTA website. In true egalitarian fashion, “Every coffee lover could be a part of this project,” Micky says. “A good recipe can be from anyone.” 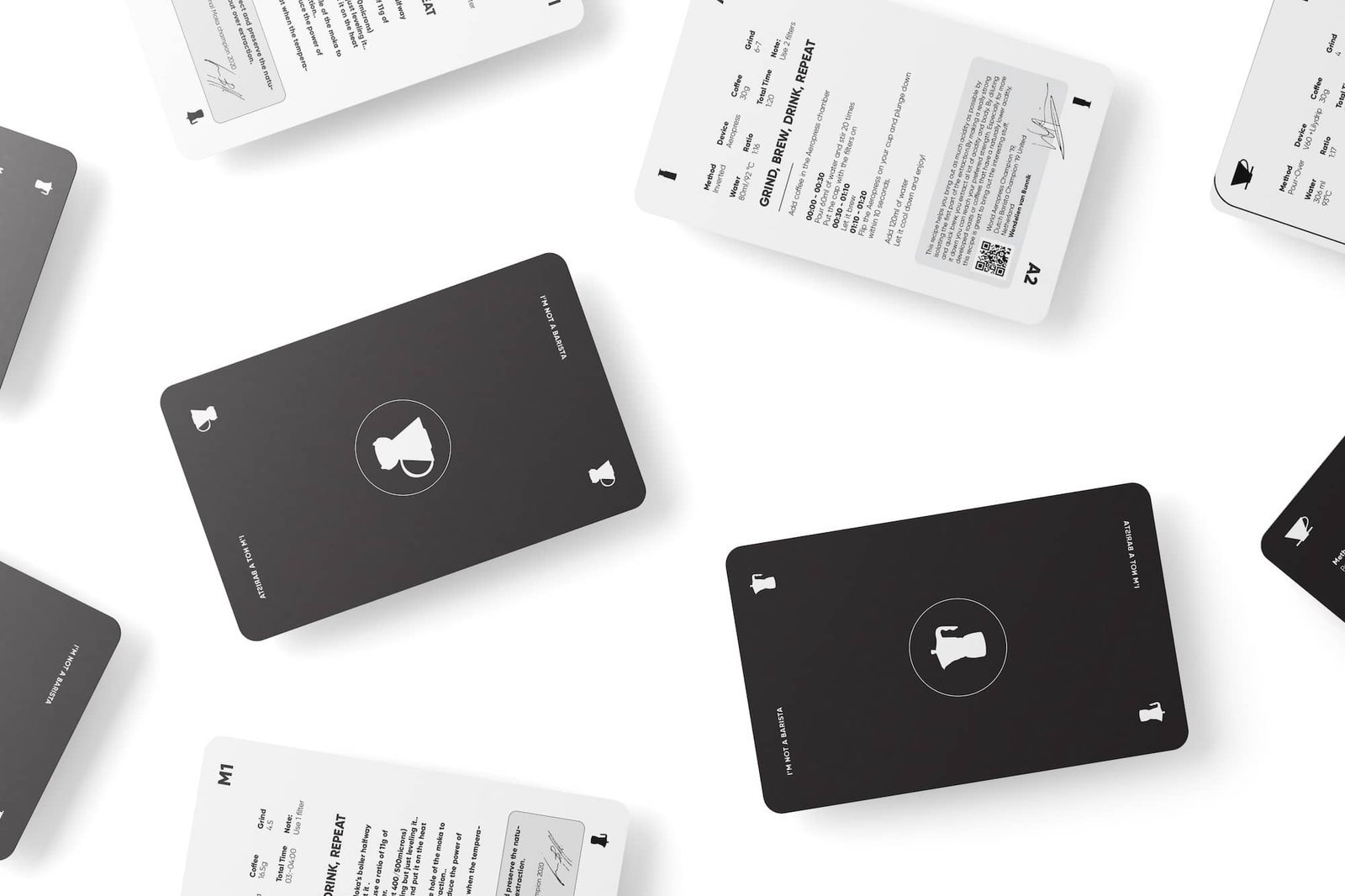 Each card has brewing information, as well as a code that leads to the contributor’s personal page at the I’M NOT A BARISTA website.

There’s something for all levels of brewers in the BREWING GUIDE decks, from recipes for the beginner to those who might want to hone their competition skills, and everyone in between. The card decks are projected to retail at $20, with all profits going back to support the community, including up-and-coming coffee competitors when competition is safe again. Micky even hinted at a “Golden Ticket” hidden in some decks that will unlock a secret prize. Because the cost of shipping internationally might be steep for some, all recipes will eventually be published online so cost won’t be a barrier to great home brewing.

A Kickstarter campaign will launch in March to help fund the card decks. Keep an eye on I’M NOT A BARISTA’s social media or website for updates. You can also submit your own recipes for consideration to be included in the deck, or become a recipe tester here.